As promised the S&H did get on to the blog tracking, signed me up to a service that you could sign on to that would tell you when I had posted, all was well, birds sang, rainbows, no bills in the post and then we hit a snag.  In  order for me to do this I had to provide my postal address upfront on my website and I wouldn’t do it.  Friends and customers already have this information; when I get the shop up to speed again you will find if you make an order, which you can do with any plastic card from a bank through PayPal, to which you do not have to belong, that the order arrives with a hand made card from me, a letter in it, any necessary details about the doll and my address and phone number in case you don’t love it as much as you thought you might.  In 25 years of selling my dolls only one came back for a slight running repair that was my fault and one that had been dropped on concrete, sustaining brain injuries.  Both were mended free with love and have been fine ever since.

However putting my address out there for anyone on the web to read………..I think not.  It is apparent from the real news and the fake news that not everyone who keeps up to date with social media is as lovely as regular readers of this blog.  So I am sorry, I had hoped to provide this service.  Regular readers did provide a couple of suggestion, Bloglovin does look remarkably simple to me and I have no doubt that you could find similar services with a search engine.

Meanwhile back at the ranch I have been busy.  We have a small social media group in the local community; about three weeks ago there was a request posted on it for decorations for a Halloween Ball in aid of the local hospice.  I thought this was a good idea and it sounded like good physiotherapy too, so I volunteered to make some cardboard pictures.  It did take the whole three weeks and I did have days where I simply could not make the XYZ scissors work and stuff like that but I finally finished on Friday and emailed the lady who had asked.  A few days previously I had seen the ball advertised and realised it was going to be at the poshest local swanky swanky hotel, a fact that I’m glad I didn’t know at the outset.  I was thinking village hall, not local Hilton.  Anyhow, the lady rang and turned up to collect, these. 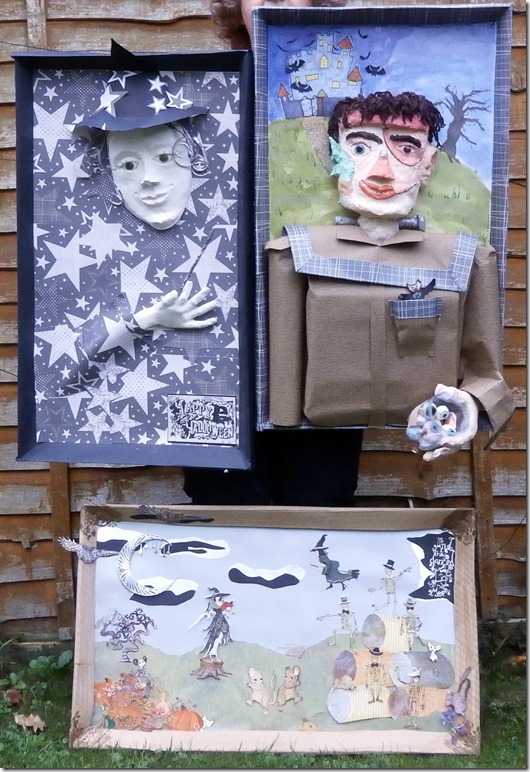 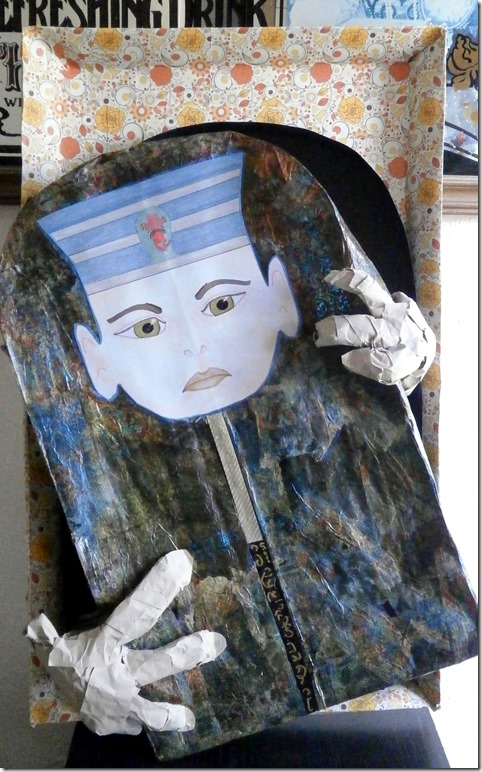 They are a tribute to my sad love of shopping craft channels and are all made with stuff bought postally; the backing and frames are made from the packaging that all the other stuff came in.  They are huge scale for me, look – 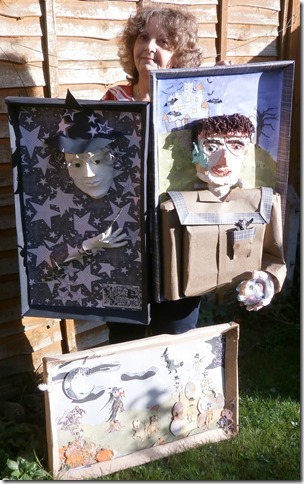 that’s me there holding them.

I did have the usual misgivings such as: why did I not keep my big mouth shut? and also: can I do this and even: can I do this in the time allotted and: why did I sit and watch that stupid TV show when I could have been getting on with it and so forth.  I think it is known collectively as the artist’s dilemma.  When the lady appeared to collect them she squealed, so I knew it had all been worthwhile and even more so when she said her father had been in the hospice.

It would have been nice to go to the ball but the S&H and DIL came to deposit the GS (Grandson, new character to the blog, six months old with the body of a much older all-in-wrestler and very cute.)  They were off to the engagement party of a friend and hoped I would baby sit.   Well they were hoping we would both baby sit especially as the Physio had told me not to pick up the giant baby but needless to say the OH felt the call of the pub and went leaving me and the GS alone together.

We had a very much better evening than anyone could have had at a ball, engagement party or pub.  The GS has the temperament of the OH’s father.  My father-in-law woke up laughing, whistled all the time and was one of the easiest people to get on with that I have ever met.  Considering my mother-in-law’s Alzheimer’s, from which she died in her early fifties, and his job, which was fireman and his navy service in the war which was eventful and occasionally traumatic he had plenty of reasons not to be cheerful but I don’t think I ever saw him frown.  He was naturally happy and so is the GS his GGS.

The GS thought the flowers on my shoes were very interesting.  He liked the toys I had bought him.  He thought the slippers with Santa on them were tasty and the trees in the garden were fantastic.  He liked his milk, his banana and peach and being changed.  He liked his new teeshirt and a cuddle and bouncing his legs on the floor and chewing the changing mat.  He enjoyed the children’s TV cartoon a lot but when the OH put on a dreadful war film with aeroplanes neeowm neeowm and bombs badoosh bang neeowm ack ack ack arrgh bang –  he was utterly transfixed.  He sat open mouthed and smiling, bottle cast aside in favour of drinking in the rush to the planes, the whoosh through the skies, the over to you red leader one, the Ay say old chap, the whole nine yards, he loved it.  And for lo, there was my father-in-law back again, genetically speaking.

Why do they love that stuff?  I have no idea.  Is it suitable for a baby?  Absolutely not.  As soon as the OH had departed so did the cowboys, sorry aviators and all was peace and quiet.  We had a lovely evening and when the S&H and DIL came back so had they.

Grandchildren are wonderful and, best of all, you get to give them back.

Even without a postal address you can contact me. You can email me just by doing the leave a comment thing here, I read all emails and respond to most unless they are spam and get filtered out or in very foreign languages where my computer skills are not up to accessing a different character base and being sure I was saying what I hoped I was saying.  Despite Star Trek, given social media and International relations, I think we are still some way off a universal translator on this planet, never mind any others.

This entry was posted in About artists., Site information. and tagged big pictures. Bookmark the permalink.