Decoupage is an interesting term which broadly covers most activities involving cutting bits of paper out of their original source and sticking them somewhere else.  In card making it can involve repeated cutting of the same duplicated image in decreasing surface area and mounting them in a glued stack to produce a three dimensional effect.  A much older version involves cutting out images to cover an entire surface.  One of the first items I bought when we moved into this open-plan house was a Victorian scrap screen, a three fold room divider covered with brightly coloured paper pictures, some sold for the purpose in sheets.  The other side of the panels is monochrome, which years of existing in rooms with coal fires has reduced to a not unpleasant ginger and brown.  The pictures for this have been cut out of magazines of the time.  When I first got the screen I spent many happy months sourcing Victorian scraps and illustrated books falling to bits to mend the holes.

Now I am having a lot of fun using printed rice papers from Italian firm Stamperia.  The papers fray very nicely but do not disintegrate under the onslaught of glue below and a layer of glue as varnish above.  This enables me to make smooth edges in transition from one piece of paper to another, a facility which would have benefitted the scrap screen; much of the damage had been caused by paper ungluing at the edges.

You have already seen some of the decoupage in my trial effort. 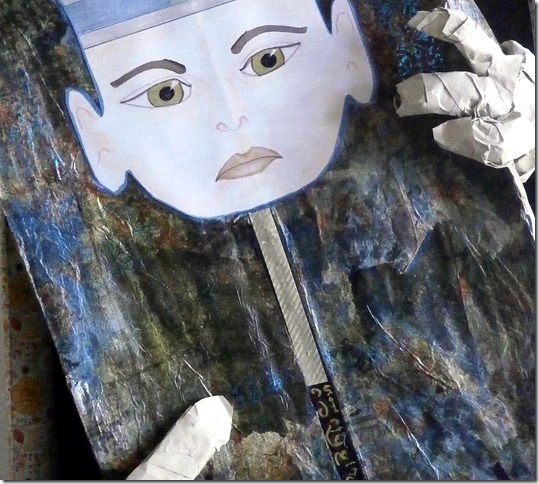 The mummy’s sarcophagus is covered with the rice paper.  It is glued to a black card base, so the whole effect is both old and rich which was exactly what I wanted.  I was also able, once the item was dry to add metallic foil rub-ons on the surface which are similar to those in a line down the plan black card in the middle, looking very like rub-on-o-glyphs.

What I learned from the experiment is how long it takes the glue above and below rice paper to dry.  This is a craft which takes patience, the old ‘stop now you idiot, you are only spoiling it, go to bed and see what it’s like in the morning’ is the right attitude.  You can, of course, blast it with a heat gun if you are really impatient but I, who have been schooled by the porcelain, which takes its own time, believe in letting things settle.  You can never be sure when things dried by artificial heat are going to go curly on you, or even, step out of the natron and stalk the land.

So the next project took several days.

After I had recovered in the spring from matters arising, I took all the old photographs I found and put them in a scrapbook.  It was a big book and I added pages but there were actual items such as baby shoes and my father’s spectacles, which made the book burst at the seams and fan out a lot.  So I decided to take the cardboard box which the scrapbook album had arrived in through the post and decorate it so it could contain the album and all the bits of memorabilia for future generations to enjoy or take to the dump in one handy container.

The following day I added a long ribbon glued and stapled on right round the box to tie it together.  I used very strong double sided sticky tape. 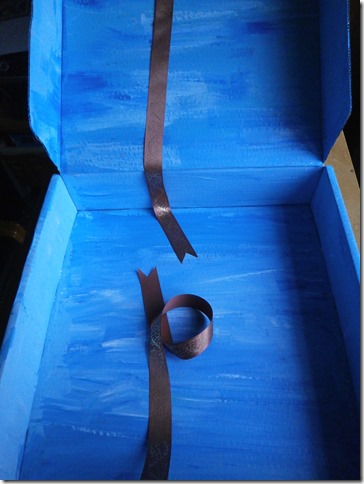 I then started to glue on pieces from the paper pads that match the rice papers and then, finally the rice papers.  You can get a soft edge by drawing the line you want with water on a brush, on the paper then tear with a soft feathery edge along the wet line that you have drawn.  After a day or so I had this. 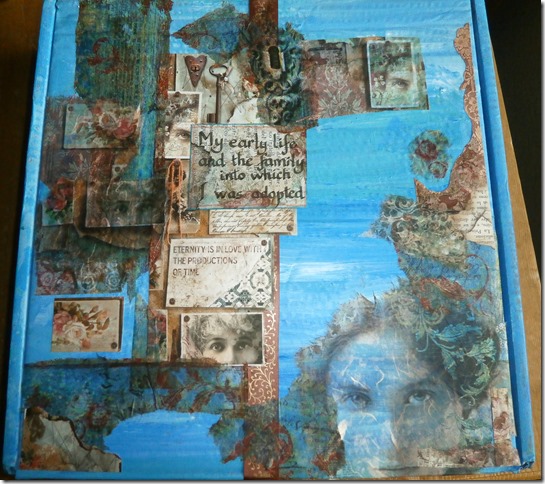 As you can see I revived the old calligraphy skills to make a title, mainly to avoid the ‘what the heck is this?’ when I have lost my marbles completely. 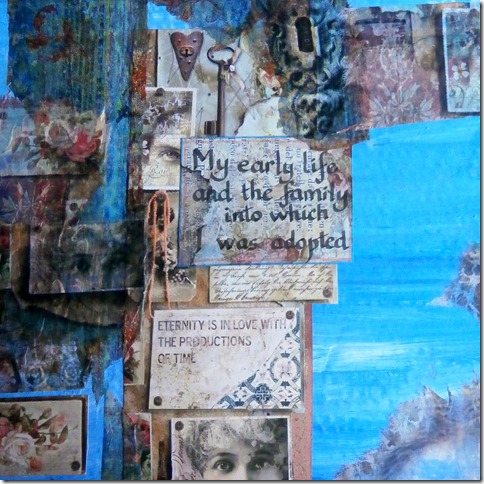 I continued adding.  I found and photocopied a picture of me, aged 14, and coloured it with alcohol markers and added that and then doodles and rubber stamped on top when the glue was dry.  I used Ranger matte medium for gluing because although wet it is quite viscose and dry in terms of not soaking into the cardboard and making that soggy.

The finished item is quite strong. 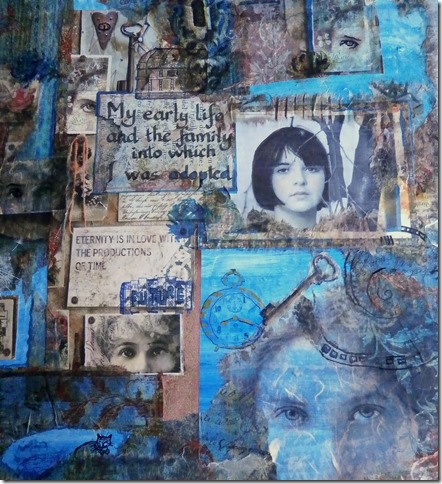 I found as I went along that it was worth keeping scrap paper handy and experimenting before adding to the item.  Some inks will not stamp over the medium, some glues will lift ink, some pens will skid on a surface and so on.  Just have a try before you commit, although one of the great saving graces of this medium is that you can decoupage over anything you hate when you come downstairs next morning to see how you are getting on.  You could also paint over a mistake and then decoupage on top.  The rice paper is wafer thin but strong.  There are many patterns to choose from, as you can see I have chosen to incorporate faces with eyes looking at you from the past because that’s what it feels like, reading the album. 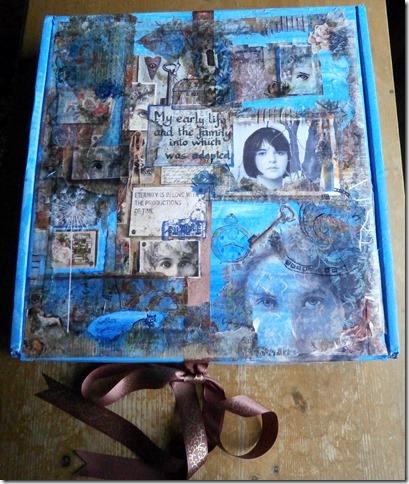 Here is the finished article, tied with a bow, very fetching.  Here is the actual object with all the junk inside the box, tied with another ribbon going the other way just to keep it all in there. 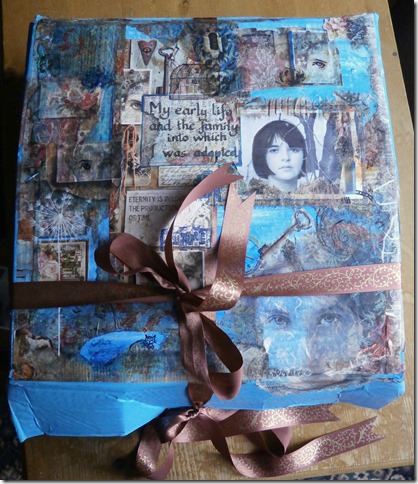 The past, laid to rest.  (Or it will be if the solicitors get on with it.)

Here’s looking at you, and moving on. 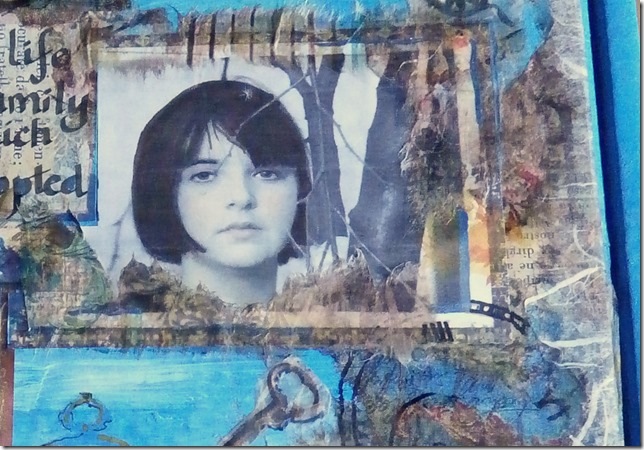 The joy of the future is that no one has mucked it up yet.

This entry was posted in Things to make and do. and tagged decoupage. Bookmark the permalink.