The horns of a dilemma

Is what I’m on.  Conflicting advice and viewpoints.  Tricky.

When we moved in to this house 33 years ago we inherited a strange pipe.  It comes out of the bathroom wall and disappears up into the ceiling.  As we had just moved in and were skint, what we did about it was nothing. At the time we had a seaside themed bathroom so I hung a whale bag over it, as you do and that was that.

Fast forward to the architect pointing to the pipe and asking me if I would like to get rid of it.

I do not trust architects.  Let loose with a pencil whilst enjoying a pint and a pickled gherkin, they could come up with anything.  They could visit Egypt, look at Paris and get daft ideas.  My late father, builder, always used to complain that architects never designed to brick sizes.

When we were at the stage of demolishing the outer bathroom wall, prior to it becoming an internal bathroom wall there was a chance to inspect the pipe from the side.  Turns out to be a cast iron soil stack bending round a steel RSJ holding up the roof.

The first plumber shook his head, sucked his teeth and said ‘Ooh no Jane, don’t touch it.  Cast Iron pipes can shatter just like that.’  So we ordered a concealed cistern toilet preparatory to boxing in the pipe.

The second plumber said, ‘Ooh Mrs Laverick, you don’t want to go hiding that, that’s asking for trouble, left alone they can spontaneously disintegrate just like that.’

Then two plumbers took my shopping list went off to the plumbing suppliers, brought back three radiators and disappeared shaking their heads.

I have watched some videos of people dismantling cast iron soil stacks.  You do need to be strong, however if you hit it in the right place………….

On the other hand, the planned second bathroom will have to plumb into the existing waste system.

On the other other hand we have lived through three earthquakes here and my stack has not shattered yet.  (Sounds like the lyric of some desperate Country and Western song, doesn’t it?  In the third verse the stack will fall out of the wall demolishing a cow that was minding its own business, roll down the hill into a river where it will give a beaver a headache and thence to the sea where it will enthrall a small eel, but only briefly.  And the cowboy doing the stack song will just have to shit in a bucket, such is life.)

My other toilet suffered damage early in the build when I believe someone stood on it to reach the light in the ceiling.  If I am not careful here the cowboy might not be the only one very inconvenienced.

So I called the plumbing firm and asked the receptionist to call out the MD as I believe either plumber getting it catastrophically wrong is a worry well above their respective pay grades. 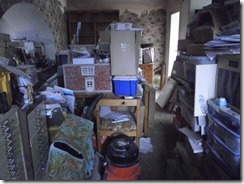 we will be able to lift the concrete floor and see what was done when the downstairs loo (on the other side of the wall) was plumbed in and with what and connected to what made out of which material.

Meanwhile, meanwhile, what I really need is the building equivalent of the bendy camera on a wire that was bunged down my throat with such enthusiasm at the hospital, so I can see what is going on in the intestines of this building.

Supermarket shoppers are starting to stop me to say in tones of surprise,’but you must be nearly finished by now, surely?’

When I am twenty years older and still living here I will be satisfied that I have got to the bottom of everything and that there are no nasty surprises coming out of the walls.

It will be a happy situation arrived at by myself putting in the ground work for it.

This entry was posted in About artists. and tagged soil stacks. Bookmark the permalink.