Or – How to go into lockdown with nothing and emerge some weeks later with an heirloom.

I would, before we begin, absolutely love to show you my collection of houses made from junk but they are all put away somewhere because of the build.  Also, because of the build I have no idea where all my stuff is. This is good. We are starting the same and will make a dolls’ house from scratch with next to nothing, together.

A dolls’ house does not have to be a house, it could be a castle, a shop, a room, a fairy dwelling, a place in space, anything at all, but it does need to have actual substance.  There are, of course, house manufacturers who are still trading; miniaturists have excelled at conducting business by post for at least thirty years.  The Miniatura website still shows the exhibitor listing of those who would have been at the Spring show, had it not been cancelled and the contact details.  www.miniatura.co.uk  so you could, if you wished, buy everything by post and make a lovely conventional dolls’ house and finish it off by collecting the finishing touches next Spring.

However, I am imagining you might be worried about money and inclined to make something out of nothing.  I applaud this, there may be a number of children who learn in the lockdown that toys can be made!  Who knew?  (All miniaturists.)

Look around and find some cardboard boxes.

This is what I found: 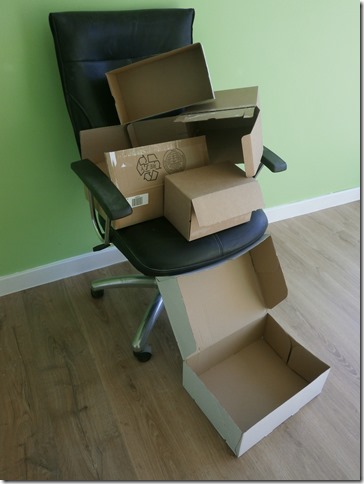 In about five minutes.

Let’s have a closer look: 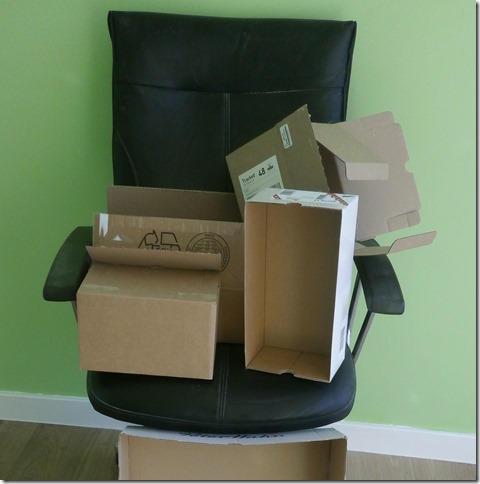 On the chair at the left, a box an Easter egg arrived in through the post, next to it a shoe box, behind that another egg box and at the back an average postal box that had something in from the big river retailer. 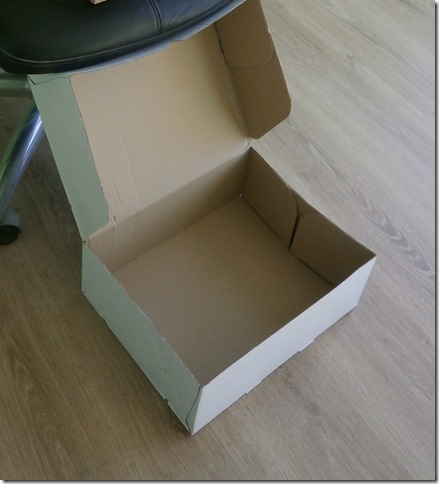 On the floor a box that had clothing from a manufacturer abroad.

All of these could be used and, if you can only find one cardboard box, that’s the one you’ll be using.

It is normal during the process to fall in love with the house you are making. Therefore, if you have a choice it would be unwise to choose a flimsy box.  The best choice is the strongest box you have got.  Although the box on the floor looks lovely and big it is quite thin cardboard, it is not inherently strong.

Of all the boxes in the photograph the strongest by far are the two Easter egg boxes and the big river retailer postal box.  These were designed to survive the post carrying potentially breakable items, so they are a good choice.  You can, of course, strengthen any box by gluing extra layers of cardboard on it but it does really help if the box you are beginning with is strong.

If you now have a couple of candidates you need to decide what scale you are working in.  Dolls’ houses, like all models of reality, can be made in various scales.

The standard scale for the hobby is twelfth scale. This evolved over a hundred years ago, was commonly  used in Victorian nurseries by a carpenter making the family a house to play with by simply changing measured feet in reality into inches in the model.  As there are twelve inches in a foot, the model is one twelfth the size of reality in every dimension.  So are the dolls. In this scale a six foot tall man would be six inches tall as a doll.  If you click on the banner at the top of the page, that says ‘about Jane my first house’  you will see a photo of my Edwardian house which is true twelfth scale.  It sits under the stairs and demonstrates the problem with twelfth scale. It’s big.  In your real house a twelfth scale house can easily take up as much room as the sideboard.  A twelfth scale town house could be as big as your fridge freezer.  In cardboard this could create strength problems and be difficult unless you have a very big cardboard box.  However, there is nothing to stop you making a room box.  A room box is exactly what it says, one room, rather than a whole house.  The advantage of twelfth scale is that it is easy to shop for, easy to get your hand around and not too fiddly to make things for, if you are not very dextrous.  In the photograph the box on the floor could make a twelfth scale room box.  If I were going to do that I would cut the lid off and glue it to the back and sides to strengthen the box but that would take quite a lot of glue, half a jugful at least.

Twenty fourth scale is my favourite scale.  It is half the size of twelfth scale in every direction, so that a twenty fourth scale house can sit on the windowsill of your real house. In this scale a six foot tall man is rendered as a three inch tall doll.  It is possible, with wood, porcelain and other authentic materials to make working models of most household items.  That is to say, the drawers on the chest will open, the bed can be made and dressed, the plates can be put on the table and so on.

Forty eighth scale, as I’m sure you have guessed, is half the size again in every direction, a whole house can sit on a paperback book.  The six foot man is now one and a half inches tall. 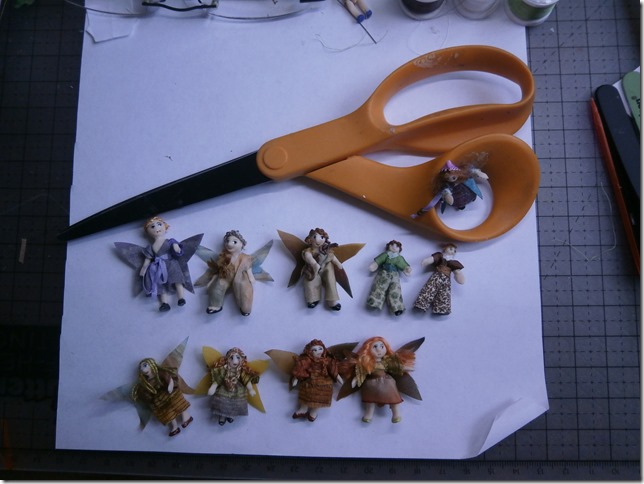 These were the forty eighth scale fairies I was dressing before everything stopped.  That is not a giant pair of scissors, the dolls are small.  Advantages in this size are that any titchy box will do and there are plenty of postal kits to help you which only need to be stuck together with PVA glue.  Disadvantages are that the smaller you go, the more dextrous you need to be and the more likely it is that everything will have to be stuck down to avoid breakage.  A 48th scale house is more of a model to be admired than a toy to be played with.

One hundred and forty fourth scale and beyond lie realms of titchiness and tweezers. Everything has to be stuck down to avoid being inhaled, which is not recommended. 144th is, as I’m sure you’ve worked out the dolls’ house to go in the twelfth scale dolls’ house, and 288th scale……………….

There is also something referred to as free scale, professionally speaking, which translates as ‘I made it this big’ and any other scale you like, including assorted model railway scales and Playscale which is made to fit plastic fashion dolls.  I made a shoebox barracks for the S&H’s toy soldier doll long ago, with drawers made out of cardboard and plastic inserts from dried spaghetti shapes boxes.

Having considered all of that, assess what you have to hand.  Could a box be subdivided into several rooms?  Have you enough cardboard?  In the photograph  the shoebox has potential as a long low room, two rooms side by side, or a one up, one down, in twenty fourth scale.

It is important to consider your resources, you are going to need cardboard for furniture and maybe floors, walls and windows.

To help you decide what scale is appropriate, cut out a simple figure.  It’s that six foot man again.  Fold a piece of paper in half, measure six inches and draw half a gingerbread man.  Cut him out. Now repeat the exercise but draw a three inch gingerbread man and do the same with a one and a half inch man.

Take your gingerbread man workforce to your cardboard boxes and try all of them in all of them.  Because you have lived in houses all your life (unless you have had a more exciting life than I have) you already know which man looks right in which house.  You can see which is the right size to make a room, a four roomed house, a long bungalow. Make your choice.

Do some looking and maybe some printing and before we meet again, hopefully tomorrow, find glue or send for glue.  In miniatures we love tacky glue but any kind of strong glue to glue cardboard, probably any type of PVA, would be good.  Avoid wet glue, which will make the cardboard soggy, avoid paper roller glue or solid glue sticks, which are not strong enough.

This entry was posted in Things to make and do. and tagged how to make a dolls house with nothing much. Bookmark the permalink.