I may be posting every day and a half for a while.  As well as making it to show you and photographing it, I have to find it. Although the builders have left (hooray!) everything I possess is still under tarpaulins or a cloud of dust.  I still have not moved into my work room, the garage needs painting and so forth.

I have found and thought I would show you some small scale items to demonstrate some interesting aspects of scale.  You’ll have to forgive the photography, I can’t find any of my studio stuff, either.

It is important to understand that a dolls’ house, diorama, room box, or whatever you plan to create, is, above all things, a piece of art. New miniaturists can get very hung up on precision.  I got there myself, to the point where everything had to be historically accurate not just to the year but to the season. Eventually I became paralysed by the horror of getting it wrong.

One of the advantages of working for magazines was that I got to see a lot of photographs of houses and a lot of actual houses.  For quite a while in the 1980s there surfaced a lot of pinkly perfect houses.  Made with the same kits, or sourced from the same makers with everything placed just so, although every house is just as different as every new baby, after a while a creeping sameness made the photographs unpublishable because the wonderful finished house was so awfully like last month’s wonderful finished house.  It gradually dawned on the editorial team that the very best houses were the slightly imperfect ones and the very best were those made from scratch with more heart and less architectural accuracy.

I actually prefer houses that are slightly out of scale because I first encountered various historic houses, now in museums, made in a time when the house owner had managed to persuade the carpenter to make her a table, same as a big one, but little.  Historic miniature home owners became adept at adapting and skilled at skirting round difficulties.

Here for example is a Jane Harrop house kit in 48th scale, made up by me. 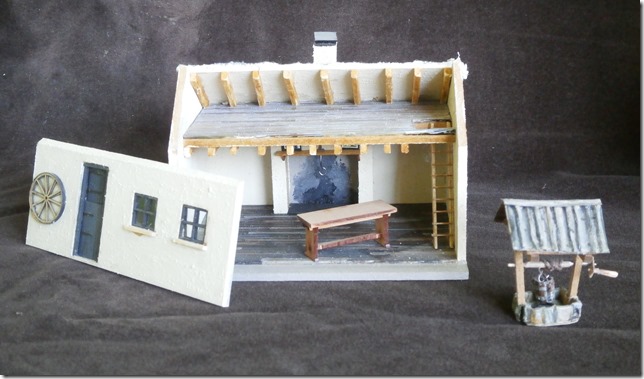 Everything was provided in the kit, except the well which I scratch built, as you can see the result is beautiful.  If you buy a Jane Harrop kit (she’s online) your result will be very similar to mine because Jane’s kits are meticulously researched and put together.

Incidentally if you are still not sure about the size of 48th scale, let me just finish this cup of tea…… 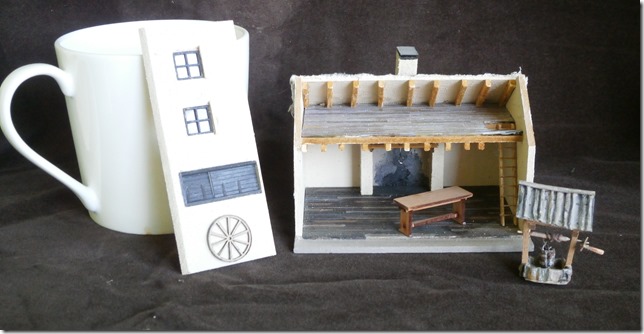 See, small. And perfect.  If you only like perfect, which you are allowed to do, the entire point of miniatures being to create a universe of your own preference, you could buy a Jane Harrop kit and be pleased as punch with the finished item.  I did and I was.

Here is a structure that I made very early on in my miniatures career. 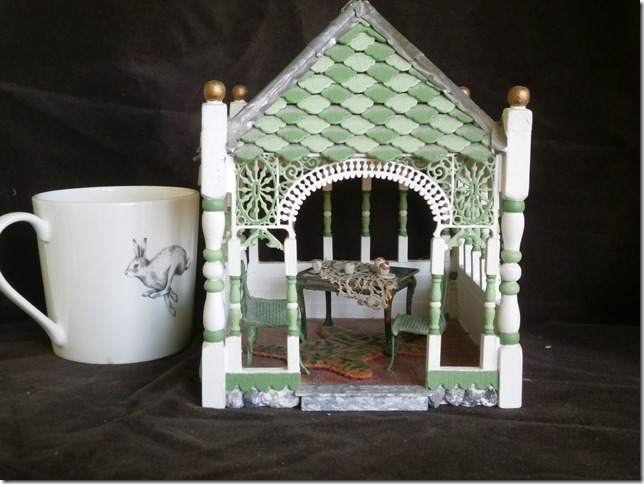 It’s a gazebo, and, as you can see from my tea cup, not terribly dissimilar in size to the 48th scale house.  I have used it, however for 24th scale children.  Like this, 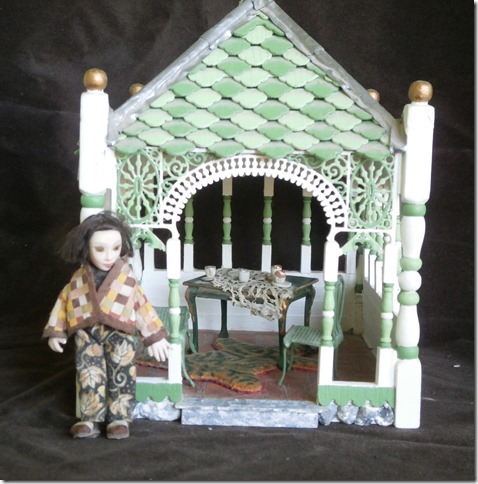 And for a two inch girl, a doll’s doll just over 48th scale like this, 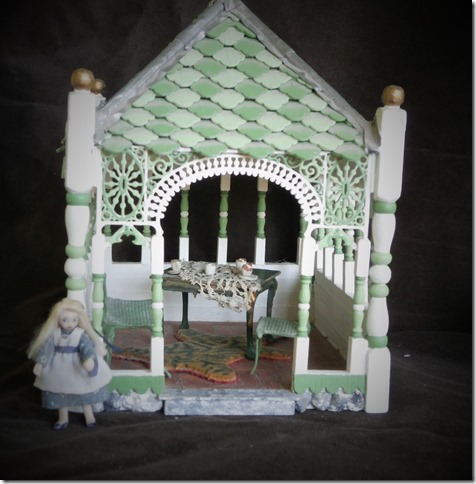 And they both look OK, I think.  The components are turned miniature wooden pieces, dolls’ house shingles and wine bottle lead.

But the contents were scratch built from nothing much by me, early doors. 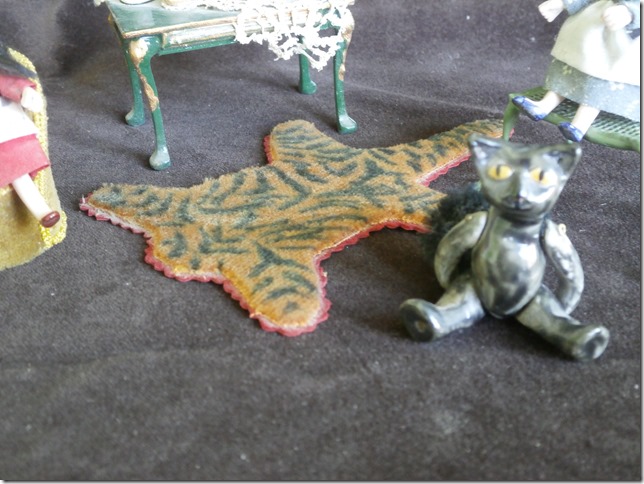 The tiger skin rug is a piece of velvet, marker pen and a felt backing. 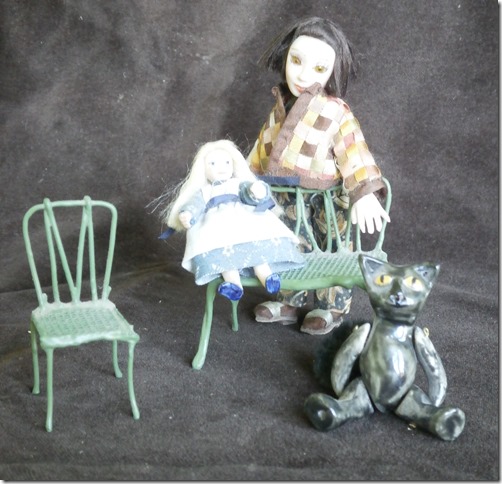 The chairs, which don’t look silly with either size doll, are garden wire, tapestry canvas and glue. 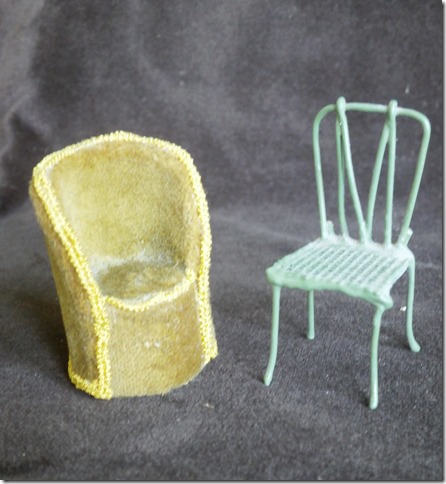 Any guesses about the upholstered chair?  What could be under that, I wonder? 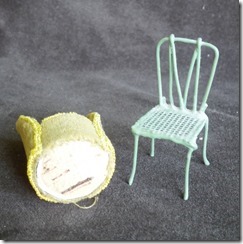 How are you getting on with box selection?

I decided the egg box was the strongest.  I cut my gingerbread men, here they are. 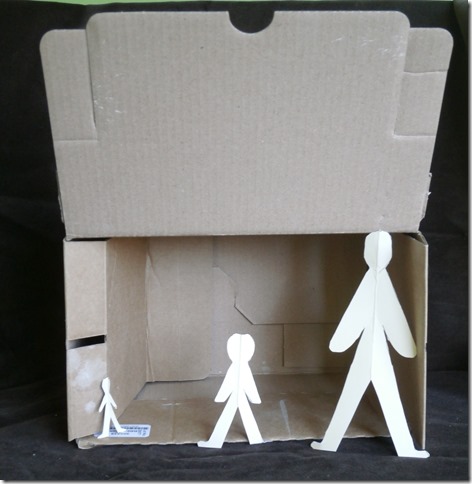 On the right is the six inch man.  You don’t need to be any sort of miniaturist to see he is just too big.  The three inch man in the middle looks pretty good, size wise, but the one and a half inch chap is lost in there.

If we zoom in you can see the clear winner 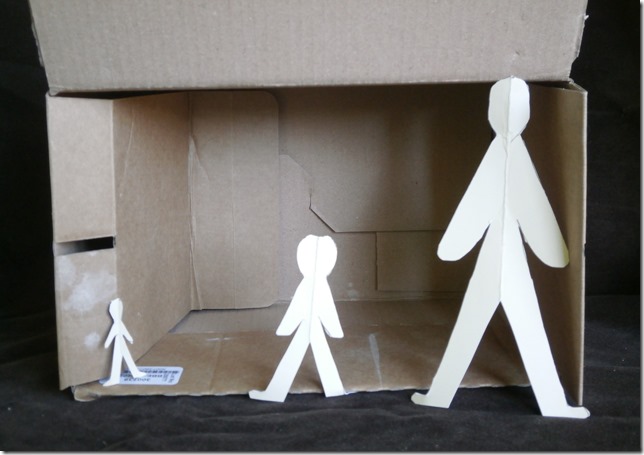 If you can’t think in gingerbread men I can show you with actual dolls. 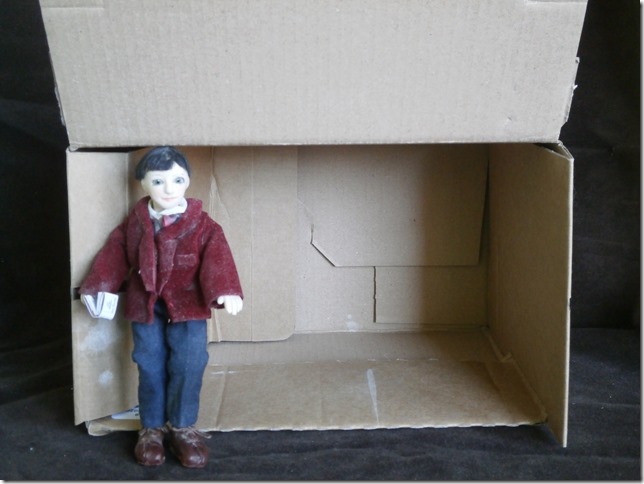 Too big, he’s having to bend his knees.  (I must clean the dust off him, poor bloke.) 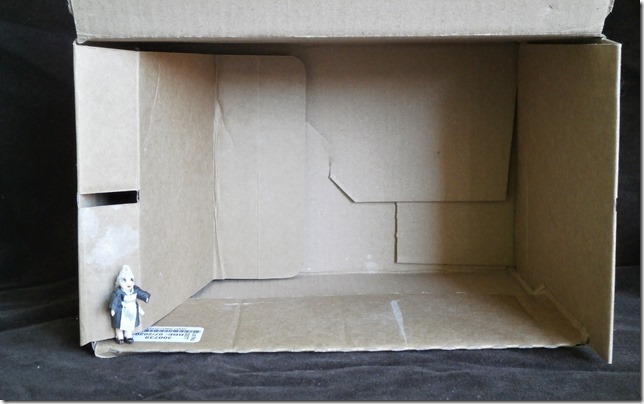 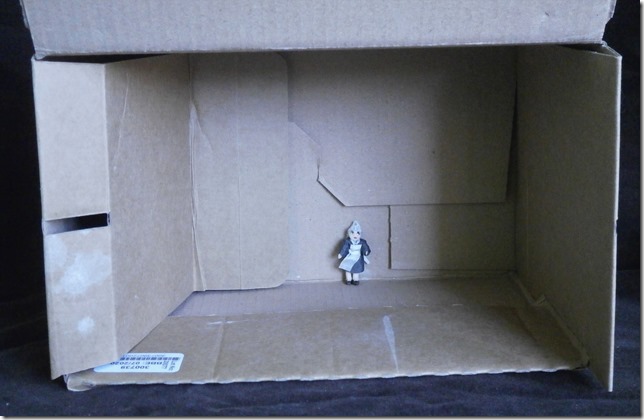 And here is the winner, the 24th scale articulated man. 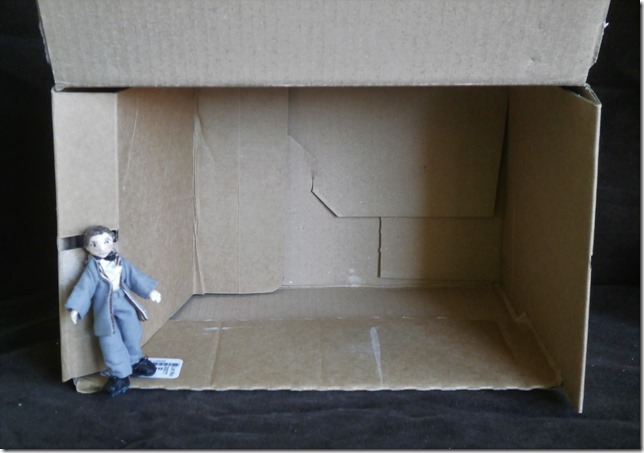 Oh yes, even up at the back he looks alright, 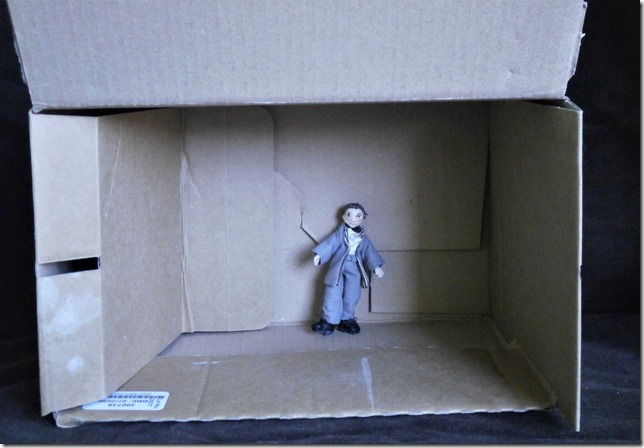 twenty fourth it is.  It’s still not too big to make and finish before lockdown is lifted 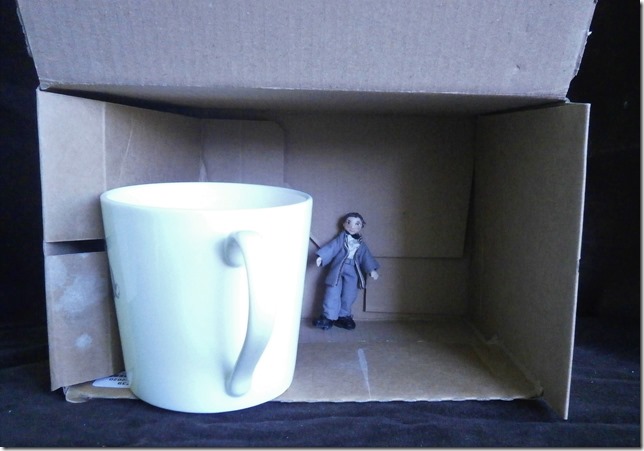 Or my cup of tea.

Before we meet again, you may wish to decide the story of your structure, now you have decided the scale. Is it a castle, a shoe shop, a house in the woods?  Somewhere you have really lived?  A place of fantasy?

This is the thing that got me through long dark nights.  In my head I replaced worry with a story.  The story of my house.  Who lived there?  Why were they there? What was their story and how could I tell it?

Incidentally dolls are not obligatory.  Queen Mary’s dolls’ house at Windsor Castle has no dolls at all.  She probably had had enough of people, if you have shaken as many hands as the average Queen, you would probably love a house with no pesky people in it.

But you could have cats, or teddy bears, or ghosts, or aliens.

Or people, but just not in the room right then.

This is your piece of art.  You are the creator of it.

What you say goes, because you are just about to discover one of the most treasured and brilliant aspects of miniaturising.

Unlike life, you cannot be wrong.

This entry was posted in Things to make and do. and tagged making a dolls' house from nothing much. Bookmark the permalink.