One of my favourite television comedy series was Rising Damp. Rigsby, Miss Jones, Alan and Philip were characters you could easily love, they were wonderfully third rate, all of them dead ringers for somebody you knew at the time, which was the mid seventies, when we all had tank tops, afro haircuts, wide trousers and, to go with our lack of style, absolutely no sense of direction.  For me in my mid twenties, I not only knew people like all of the characters; all those I knew like them, also lived in seedy bedsits in huge old Victorian houses.  I was working in a language college, similarly populated, conducted in a Victorian pile with hardboard internal walls, intermittent electricity and unexpected fire escapes that we used to have lessons on when it was sunny.  Everyone I knew had dreams of greater things that were only ever going to be dreams.  Prevalent colour schemes were orange, brown and mouldy.

In the nineties, nostalgia being what it is and all my friends then having proper jobs and real houses, the Rising Damp sets had added charm.  Since becoming a miniaturist, a Rising Damp house was on my list of buildings to miniaturise but at the time the need for school uniforms overtook the need for dolls’ houses.  Accordingly, answering a call from the magazine I was writing for at the time, I scratch-built a room box.  I never finished the outside and may do so now, so you can see that the room is constructed of foam board, which is two card outer layers enclosing foam.  This is easy to cut with a craft knife, thick enough to cut into from one surface to hinge doors and windows but light and easy to handle. 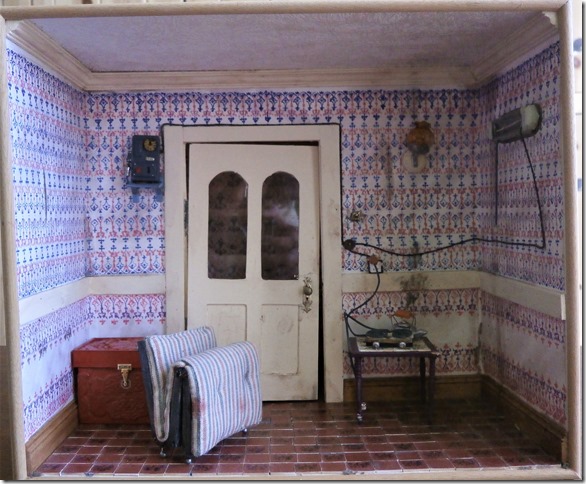 I appear to have made the wallpaper myself with a stencil, patience and felt tip pens.  The architrave, skirting and dado rail are all commercially available bought and painted or stained wood.  The door is a DIY layers of cardboard job because I couldn’t find the exact doors from any dolls’ house manufacturer.  Although the building is referred to as Victorian in Wikipedia and other resources, architecturally it is leaning towards Edwardian, though of course, the great glory of the sets was the way they depicted so accurately the tendency of old unloved houses to be patched up with all-era leftovers.  I had such fun designing the electrics.  All the appliances plug in, the sockets are layers of cardboard. 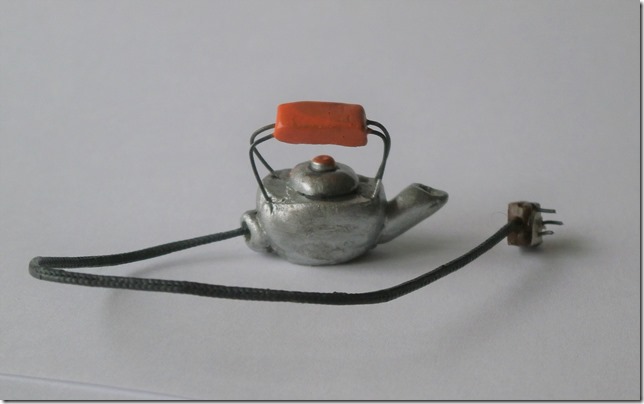 One of the main difficulties with a room box. where you can see the outside edges, is suspending your disbelief.  This can be overcome by a fake wall at the back. 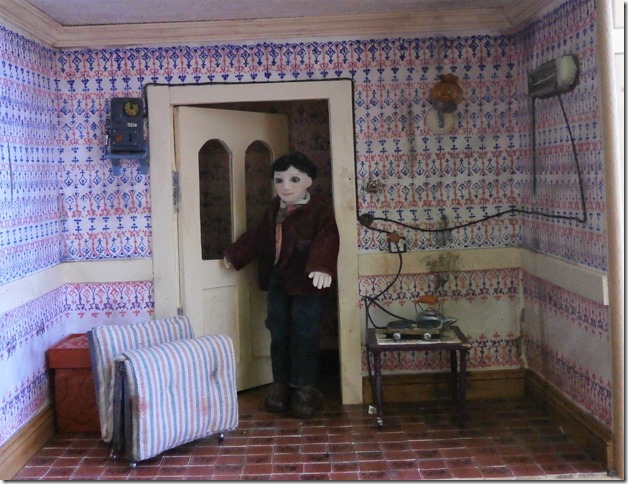 There is sufficient room for a doll to be standing in the hall. 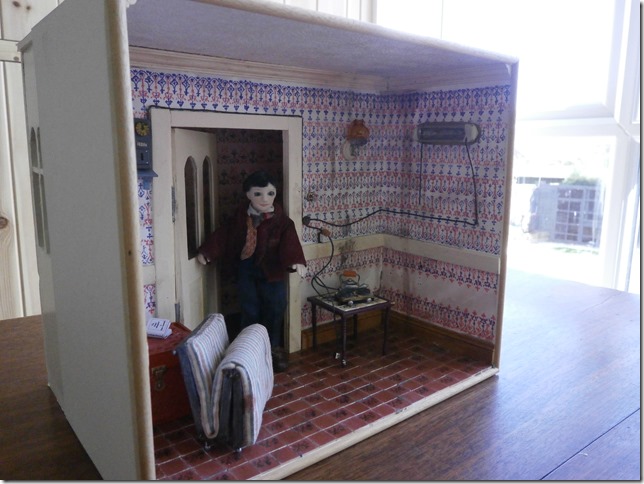 and I put a window at the side to illuminate the hall space, as the room is not actually electrified, despite the appalling appliances. 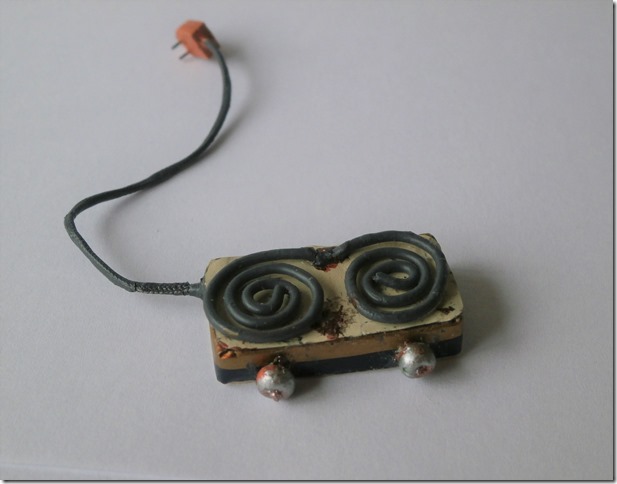 I had friends who owned items such as these and no other means of heating food, because this is what we had prior to microwaves.  This is a posh one because it has two rings and knobs to make the heat go both up and down.  Theoretically.

Here is the room from the side. 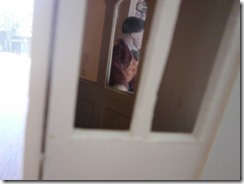 You can see through to the hall door. 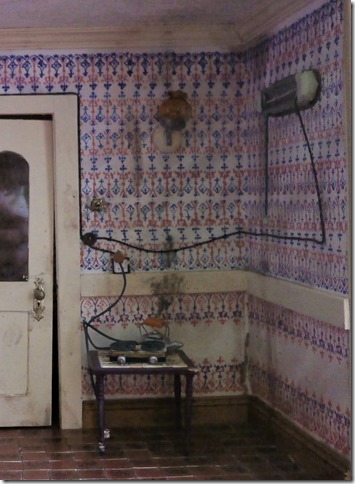 If you are distressing a building you have to be careful not to overdo it.  The golden rule is to make a good one and then destroy it creatively.

I never actually slept on what were known at the time as Zed beds.  Though this is the way some friends acquired bad backs. 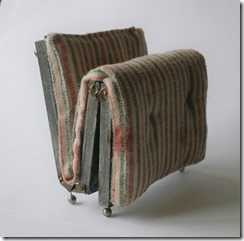 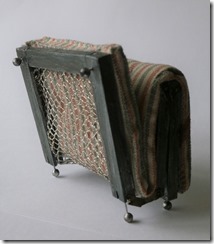 I sewed a proper mattress, buttoned it, made a frame, attached it, folded it, glued it and then distressed it.

If you look there are only six items in the room, all scratch-built and all cardboard, Milliput and wire, so the entire effort was very low cost.  I don’t think the red box was originally made for this room, I think it was for a different article in the magazine, but it has drifted in there and, true to the spirit of this type of building it will stay until visited by a wrecking ball.

Of all the wonderful actors that made Rising Damp such a joy, I only see Don Warrington regularly, playing a police inspector in Death in Paradise.  He was so gorgeous when he was young.  Leonard Rossiter, who played Rigsby, and Richard Beckinsale, who played Alan, have shuffled off this mortal coil.  Frances De La Tour, who was the ever-hopeful Miss Jones, is still acting.

The comedy is still worth watching and still funny. It is timeless, being about the interplay between the characters, all hopeful, all going nowhere. It is a subject close to my heart, the joy of the mediocre, through it we laugh at ourselves.

We all will be rich, famous and whisked off somewhere very nice by someone who will adore us, just as we are. Any day now. 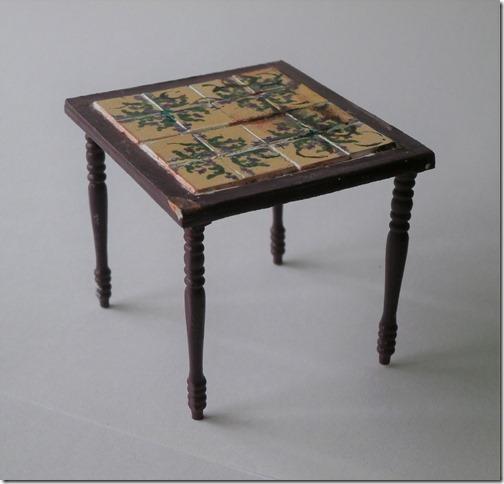 This entry was posted in About artists. and tagged making a room box, roombox. Bookmark the permalink.