I am currently supporting by telephone two people caring for others with dementia.  The idea, after the dementia diaries, that I would have to engage with the effects of this destructive disease again is quite depressing.

Both sufferers are depressed and gloomy.  All one of them could say for several days on the phone was that she just wanted to die.  The effect on family members who are carers is also to depress and remove hope and any joy in being alive that there may be.  As you have read the dementia diaries, which you may have done if you’re a regular (Hello, how are you?  What’s your weather like?  It’s absolutely chucking it down here, in June, I ask you!  Not sufficiently heavily to dislodge the lily beetles currently making holes in the lily leaves.  I went out to squirt them, because if you leave them on the leaves, to leave them to their own devices, they can strip all the leaves, leaving no leaves. just a bare stalk, in a day or two and then, the gits, if left, they leave parcels of digested leaf waste all sticky and ‘orrible down the stems.  I ‘ate lily beetles, they are one of my number one garden pests, closely followed by the slugs, who are very excited the dahlias are on the verge of bursting into bud, because they, the little SH 1 Ts, throw dinner parties in my dahlias, all nighters.  You can practically lean out of the bedroom window and hear the chomping.  Anyway, nice to see you.)

Everyone who I talk to about their dementia, or the dementia of their liked one (you’d be crazy too if you still loved them with a sparkly eyed intensity)  goes away uplifted and cheered.  I, however, need a minute to myself, or an hour.  I have learned not to phone one particular person too close to bedtime, or even late in the afternoon.  I had a dentist’s visit which had to be given over to XRays to determine whether the agonising tooth was an abscess or just the result of grinding my teeth in my sleep, having taken everyone else’s problems to the land of nod. 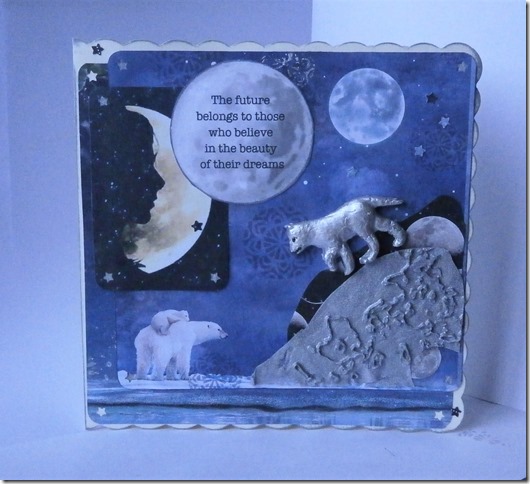 Here is a cheerful card, which someone will receive sometime.  These are largely Stamperia products.  Yes I am still making stuff to stay sane.  I am having difficulty writing comedy because there is nothing comic about people dragging you down.

So why, you well may ask, do you do it, you banana?  Why not stay off the phone and let them help themselves?

As I’m sure I mentioned, a wider family member did take his own life some weeks ago, and I’m not having anymore of that.  And also, I had no one cheering me up through cancer and I wish I had had that.  Actually that is not totally true, a friend did ring and chat about nothing and I was glad she did because I was getting negative support at home.  And I did get ecards from readers, thank you, thank you, and I was glad and cheered up.

It is difficult but it is worth doing.  Stopping someone else going completely bonkers is a very good thing to do.  Sometimes I need a good couple of hours making cards or gardening (when it isn’t raining on the lily beetles) or working out just to get my head in the right place again.

It feels like a massive effort and it doesn’t even burn calories.  You would think after dragging someone’s mood uphill in an hour-long effort, that you would have noticeably slimmer calves, for example, or have dropped a bra size and be sloshing around in your cups like two pints of cider in an empty barrel, but so such luck.

And if you are someone, who, like me, is cheering and supporting by phone, sending random cards, happy emails, or even just smiling at the misery on the supermarket checkout, I salute you!  I salute me, I salute anyone under difficult circumstances keeping their pecker right up and I salute those who cheer them on and help directly.

Remain buoyant (or girlant), keep busy and present a moving target at all times.

And, of course, squirt your beetles when the rain eases off.

This entry was posted in About artists., Dementia diaries. and tagged support for carers. Bookmark the permalink.