One of the more interesting, not to mention frustrating aspects of selling miniature art at exhibitions, is that before you can do so you have to design the display.  I’ve just spent a week designing and building this, which doesn’t look much.  It’s a covered shoe box and two segmented boxes constructed from what is known in antique doll collecting circles as ‘carton’ and everywhere else as cardboard. 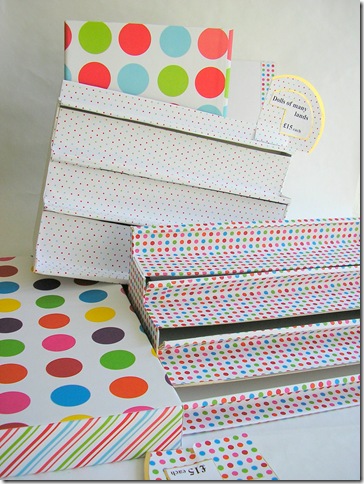 At the outset, when the intrepid exhibitor has worked night and day for months to produce about five things good enough to show, this is not usually a problem and for some categories of exhibitor in the field of mini art, it remains not that difficult by lack of choice.  Set up time at a big fair is often a staggered delight, exhibitors staggering in with heavy trunks and boxes are allowed entrance at times staggered by the amount they have to set out.  Looking at a fair as a visitor you might imagine that as the doll’s houses are the  biggest thing, they have to go in first.  However for the bespoke maker who has one or two houses to show, all he or she has to do is roll up, spread table cloth, erect sign, place house and then wander round with a cup of coffee having a squint at everyone else.  However, as with every category of miniaturist, the more detailed the work, the longer it takes to set up.  A lit and electrified house, has to have all the lights checked, a detailed house with working doors and windows needs further attention and a furnished house (and there have been some brave souls who have exhibited complete, furnished, finished houses, just before they had the breakdown) will take every minute there is before opening time to set up, unless everything is stuck down.

In general, the larger the miniature, the quicker it is to set up.  It’s the small stuff that causes the bother.  It’s not just that every single thing has to be placed by hand on the stand, it’s also that it has to be reachable if someone wishes to buy it and not reachable if a child with a melting ice cream wishes to cuddle it.  Some folk invest in glass display cases and I was one of them, once.  I bought a terrific antique revolving, four sided case with opening glass doors on every side and little boxes within.  I think it had been designed as a jewellery show case.  It held little dolls where you could see them, visible but protected.  It only took about three shows for me to see that visitors were utterly terrified of opening the glass doors in case they broke them.  After two shows of opening the doors a million times in a day to take all the dolls out for everyone who wanted to look and putting all the dolls back in for everyone who didn’t want to buy, which was most of them, the wonderful glass case was retired to the base of the spare bedroom wardrobe.  I remember a show, years ago, when the original Glasscraft had invested in one of those little revolving display stands with the mirrors round the base.  It was successful in that shoppers did indeed wish to buy the items so well shown, in the round and going round, however picking the item up was more like one of those fairground games where the giant grabber comes in, erratically propelled by a would-be buyer with their tongue poking out in concentration.  It was a hit and miss affair for one fair only.

The other consideration is the cost of tables, not only does it definitely not get cheaper the more table space you hire, some of the best fairs are so well subscribed, you can’t have more space, even if you approached the organiser with serious gold bars.  Haberdashers and people selling jewellery findings, and tiny stuff such as mini door handles, brads and so on, by the yard, in quantity, for pennies, have to be very ingenious with things such as tall ribbon displays clamped to the edge of the stand, behind compartment boxes on the table.  They have an extra problem; such enterprises are usually staff heavy – if twenty people all want a bit of ribbon at once, they will only wait so long to get served before they wander off.  At most fairs haberdashers and small parts purveyors are always busy, because while every visitor cannot afford the several thousand pound house they really want, every miniaturist can stretch to a couple of cupboard latches or half a yard of fringing in three different colours for the edge of the miniature cushions they might make any day now.  Such traders have a huge crowd in front of the stand and a huge crowd behind the stand, all falling over each other laden with bags of pennies, scissors, rolls of fabric and ribbon and several identical baskets with individual shopper’s choices of terrifically similar ‘bits’. I have not yet seen a mini haberdasher run amok with a measuring tape, but I’m sure it’s only a matter of time.

What most exhibitors eventually settle for is steps.  A set of wooden steps that sits on a table, is strong, heavy and provides tiered shelves for display to the visitor.  This solution, that can have anything fragile nearer to the exhibitor than the sticky fingered junior visitor, also has a reducing space at the back, like the space under the stairs at home.  Here is the place for bags, spare stock, price lists, in short, the checkout.  I had huge steps at first, carefully designed to go exactly in a much larger car we had 17 years ago.  There was a big flat velvet covered step, so that I had the entire space of the table to lose the bags under and two stepped, velvet covered corners, each the weight of a small child.  This ensemble now takes up most of the space in my wardrobe and has sufficient wood in it to build a modest dining table.  There are many exhibitors who go the wooden steps route; you can easily pick them out by their massive muscles.  Other, air travelling exhibitors do the same with steps made of foam board and other light weight, fit-in-a-suitcase versions.

Always a cheapskate, I have now descended to the level of cardboard.  When properly stuck with PVA, card is durable, cheap and doesn’t clog up your wardrobe when you get a better idea.  I have designed mine so that the display also transports the dolls. 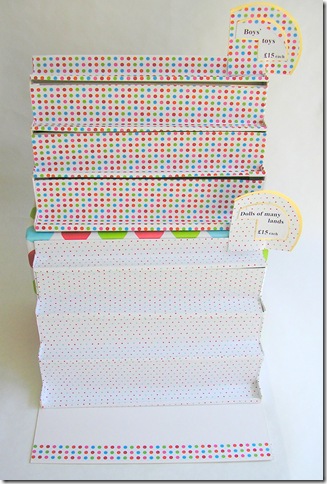 Each little step is a box with a hinged lid.  The dolls nearly slide in on their stands, or will do tomorrow, I have to shave millimetres off each doll stand so it will go in the stand and still support the doll.  There are two stands that lie together head to tail and fit in the covered shoe box the upper stand stands upon. 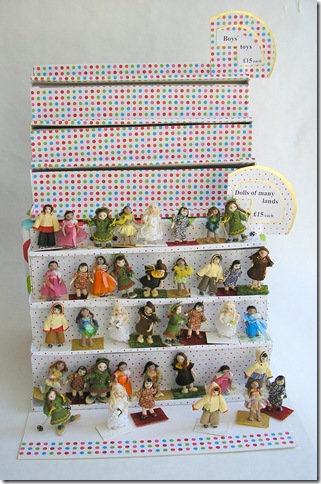 On the lower stand stand the dolls of many lands.  (There are some of each kind for sale in the virtual shop, if you have just found me.)  In the upper stand, eventually, will be the boys version, which have to be thought of, designed, made, perfected, dressed and so on.  Only.)  Would you like a grandstand view at the dolls standing on the stand of dolls on their doll stands? 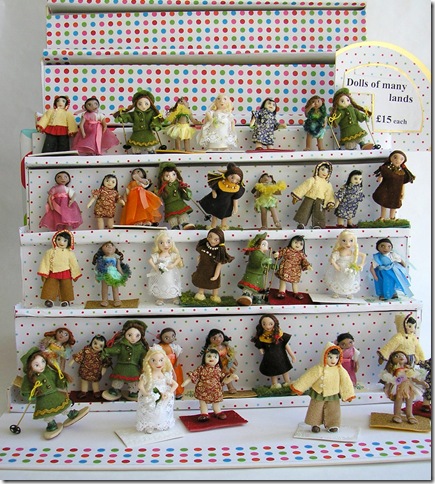 There you are, a mere six months to invent the dolls and a week to do the display.

Either it’s a symbol of my life in general, starting out with varnished, velvet covered solid wood and descending to cardboard and old shoe boxes, or I’m becoming more pragmatic in my old age.  Any artist can get like that, I bet after the Sistine Chapel Michelangelo did his own kitchen with whitewash or a cheap roll of wallpaper from the DIY store because you can get ‘been there, done that’ syndrome at any level of art from International Masterpiece to 2 inch collectable.  Well that’s enough standing around with stands, I don’t think I can stand any more.  This is the earliest Autumn Miniatura preview you’re going to get, but if you are Northern hemisphere and lying around in the sun trying to pass the twelve weeks you have to wait until the Min., spare a thought for the exhibitors, especially the once a year in Autumn brigade, all round the world they’ll be up to their elbows in art. (Or wrists if it’s smaller scales.)  Awesome, isn’t it?

JaneLaverick.com – fingers to the bone for art, dear heart.

This entry was posted in Miniatura and tagged display, Dolls, exhibitors, Miniatura preview. Bookmark the permalink.