Revenge of the Triffid.

I was an idiot.  (You may have worked this out.)

I foolishly labelled my lush and magnificent tomato plant ‘A Triffid’.

It did not like it and got its own back.

The last two posts have been about the garden because I have been having my cataracts done.  This is a thing which is both less and more bother than you would think, though on present evidence, by gum is it worth it.**  I have not been reporting on this for the theoretical learning wot I have got in the way the world works. As in: crow about something and the wheel will fall off, be modest and get on with it and yours will be the earth and everything that’s in it and what is more, you’ll be a man my son.  Rudyard Kipling, Margaret Thatcher and me, we all support this view of things. So I have carefully not been mentioning my eye in case it exploded.

However, it is still surgery and no matter how trouble-free modern surgery may be, it is nevertheless a bit of an insult to the body and should be treated with respect.

After surgery on the first eye, I came a cropper ten days later shifting massive pots full of soil and carrying statues round the garden, like you do.  Well I do, and I believe they do it in the Iron Man competition too, though they may not have had a cataract done just ten days previously.  My done eye, which had been fine, developed a white ring round it which was just like a contact lens about to drop out and becoming detached in a way that garrulous neighbours do not when you have left the last of the milk and sugar on high while you just pop out to the bin.

I lay flat, put the antibiotic drops in and crossed my fingers and toes, while cursing myself roundly and, indeed in other geometric terms too, I was quite annoyed with myself.  The day after the day after, all was well and it was a check up.

Having got away with stupidity you would think I would be more sensible for the second eye, wouldn’t you? (Welcome new reader!)

Yesterday, the day after the surgery on Tuesday, I realised the tomato plant had not been watered.  A plant 12 feet high requires a couple of gallons a day, at least.

As I (hereinafter referred to as ‘The Fool’) had not watered it, I thought I would do it by can with feed in the watering can.

This requires me to crawl into the jungle with the can, under the canopy, far from civilisation, 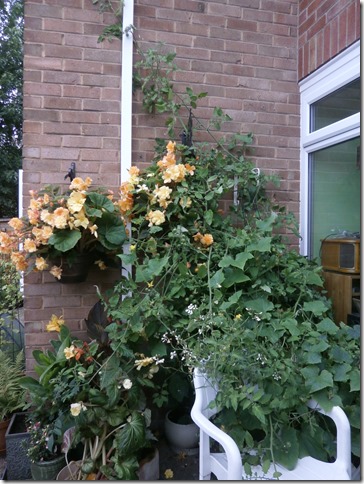 Some jungle resident, thinking I had come to nick its tomatoes, bit me.

Indoors I asked the OH to check my hair for signs of life.  This was my mistake.  I should have got fully undressed and hosed myself down with disinfectant.

During the evening the bites all down my arm became itchy, rapidly followed by everything else.  By midnight I could not lie still and had an itchy rash everywhere like this one on my arm.*

Everything swelled.  Do you remember Suellen, the poisoned dwarf who lived at Southfork by the pool in a howling gale?  Categorised as Swellin’ by Terry Wogan.  I was more swollen than Swellin’.  My swellin’ was swellin’ until I was swole, as a whole.

Thankfully the OH, who has medication for things you haven’t even heard of, crikey we designed the kitchen around the need for drawers for his pills, had very powerful anti-histamine, of the light blue touch paper and retire variety.

By three in the morning it had begun to take effect and today I just have a rash round my middle like a jammed lifebelt.

I am going to vouchsafe you a thingy that may help you in the future.

It is: after surgery, rest up.

Today I shall simply perpetrate art, but only if the pencil is not too heavy.

* I did not take the photograph of my arm for this blog, the OH took it on his phone so he could say to the ambulance people ‘But it was only like this an hour ago.’

This entry was posted in About artists. and tagged rashes anti histamine. Bookmark the permalink.