I am making my Christmas cards.

Last year, as you may remember, because of lockdown, I made a theatre and wrote the play to go with it, so folk could entertain themselves. 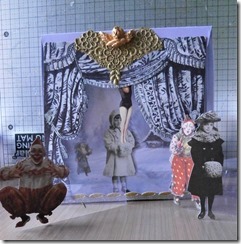 This was very popular.  People who are normally just recipients got in touch to say that they liked it.

This year I have to outdo myself.

This is the thing about life, isn’t it?  The only person you are ever in competition with, is yourself.

Before the building began, during the huge tidy up, I found some of the first Christmas cards I made, well over thirty years ago. They were scenes that I arranged with the dolls I had just started making.  I photographed them, with a camera, with film in it.  Then I picked the best one, returned from the chemist, got it photocopied on to the bottom corner of a sheet of A4, which I folded twice to make a card.

There was a fireplace with a boy hanging his stocking.  A snowy hill in town with people sliding along and so on.

For Christmas 2000 I made and sent out a porcelain manger and a porcelain flocked sheep. The next year it was a pantomime horse.  The third year was going to be the three wise men on a camel.  In porcelain, pull-along.  I started in March but reality kept getting in the way and I never fired the men.  I still do have a box of about fifty camels with axels and wheels somewhere.

In the year I fell in love with heat shrink plastic it was a slot-together tree and the decorations, that all fitted in an envelope.

Next there were a few years of arty stuff with cards done by different techniques.

Then my mother’s illness took over.  I made my cards from commercial components, stuck together and hers from similar but different.

Then I had broken arms and cancer and did simple arty ones.

Then it was the lockdown; I decided it was my job to cheer everyone up.

I have always felt the major component of Christmas to be the expectation.

As opposed to the expectoration of a row of elderly uncles on the settee with pipes and pints.

Or the conflagration of the cook setting fire to the gravy.

Or the determination that everyone should have a present, even for the unexpected guest that ends up with the three year old unbranded box of chocolates.

Or the railway station that the last person out of the office is going to spend two days at until the trains start running again.

Yes, actual Christmas can be a bit of a let-down, can’t it? All that hope and effort loaded on to making one day perfect.  Just after you have made the house perfect and all the presents perfect (especially the ones that cost a lot, ensuring we will all have to live on fresh air during the coldest months of the year.)

If you supermarket shop late on Christmas eve you can watch them wheeling the giant trolleys of baked beans into the loading bay.  Ready.

So Christmas is all about the expectation, which is why I like to make a very nice card.

I expect I will if I stop chatting to you and get on with it.

This entry was posted in About artists. and tagged making Christmas cards. Bookmark the permalink.