To go to the show.

I had forgotten how long it takes to get ready for a show.  Not the making, which takes a lifetime of practise and the practical six months from one show to the next, but the actual packing.

When I began doing this, thirty years ago, I had few dolls to display but still a six foot table to fill. So I designed a big wooden stand and covered it in velvet. The velvet pile helped the dolls to stand up and the stand raised them up from the table. The stand fitted nicely in the boot of the large car we had at the time and not in any subsequent boot, which is why it has lived for quarter of a century in the attic.  Given the petrol situation, cars are only likely to get smaller, so the subsequent quarter century has been one of continuing efforts to fit a quart into a pint pot but put a gallon on the table when you get there.  I have just bought another wheeled craft case, because two previously broken arms do not encourage hefting big bags.

I have a vast amount of stuff but it’s tiny, so I have to devise ways of getting it up near your eyes without it falling to its doom on the very hard floor.  I have already dropped two boxes of dolls in the last week, tripping over all the boxes of stuff on the floor, and broken two twelfth scale dolls.

In the midst of all this Andy Hopwood, show organiser, asked me to update the pictures in the Miniatura online brochure.  I have always been too flipping busy helping other artists, to update my own output anywhere but here. So I made time. 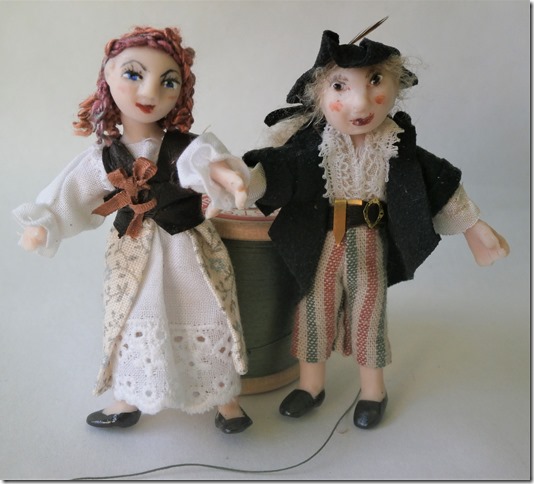 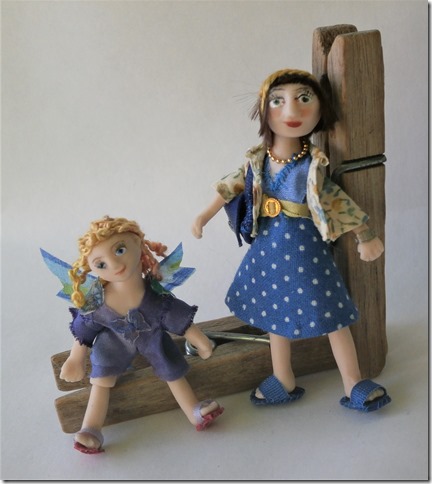 and you can see these under Miniatura Online at www.miniatura.co.uk  and the works of all the other exhibitors at the show, so you can plan your visit.

Andy informs me there are just a few tickets left for Saturday.  Sunday is pay at the door. Visitors have debated the merits of going for the Saturday show.  Visitor numbers tend to be fairly consistent and the show has always been designed with very wide aisles and limited exhibitor numbers, so there’s never a horrible crush, though you may have to wait to get to the front of popular stands and queue for lunch, if you haven’t brought it with you.  The main reason, I believe, for going on the earlier day, is if you are a keen collector and you want to get the one-offs or the bargains, which do tend to sell out.  I would like to remind anyone who has been shopping on craft shopping channels and big websites in the interim, that the glory of Miniatura is that it is mostly the exhibition of miniature items hand-made and sold by the craftsperson who made them.  The only things mass-produced in factories, unlike the goods on shopping TV, or many retailing websites, are tools on the tool stands, or some haberdashery supplies.  Many of the items sold to make miniatures, such as wooden mouldings and turnings are also individually hand-made. There is also plenty of inspiration in the form of exhibits by individuals and clubs and there are charity stands recycling pre-loved minis.  Anyone who bought a ticket for the show that was cancelled for Covid, still has entry on that ticket, bring it with you, please.

I thoroughly recommend buying the brochure at the door if you don’t want to miss anything.  Organised visitors bring a pencil and scribble on the brochure as they go round.  If you come with a friend I would also suggest arranging a meeting point because one of you will wander off into the magical forest  and get lost and it could be you.  There will be hand sanitiser, I’d use that a lot and your hand cream when you get home with the tiny packets.

Safety guidelines for the virus are on the first page of the show guide.  Mask wearing will be welcomed.  I’ll be wearing one and/or a visor as I could not do the last show for health reasons and would like to do this one without worrying afterwards that I’ve brought something home that I didn’t want.  There will be six hand sanitiser stations around the show.  I sell dolls and have always encouraged people to pick them up, so please do your mitts before you handle the dolls; if everyone does that we’ll all be OK.  The last request is for space, the final frontier.  All of Miniatura is great, if there are a lot of people at the stand you wish to view, go and visit elsewhere and return later.  I have interviewed many experienced show visitors who told me they start at the back and work forwards, or go round the wall stands first.  Stand holders with many little kits, or supplies, know how to do it and have enough stock to last the weekend.  The show guide is your friend, it has contact details of the exhibitors, who are there to sell stuff.  So, if something you fancied had been bought while you had a cup of tea and thought about it, ask if they can make you one and send it.  I did once, about twenty five years ago, make something overnight for a show visitor but I was younger then and obviously, slightly insane.  When I was a magazine writer I used to take kits home to review, make them in the evening and bring them back for the magazine to photograph on Sunday, and write the review on Monday.  Over quarter of a century later I still love the show and everything about it, I just need a bit more sleep.

It’s Miniatura! It’s back!  It’s at the NEC!  It’s the R&R day we all need away from the troubles of the world!  I’ve run out of exclamation marks…….no, I’ve found one.

This entry was posted in About artists., Miniatura and tagged spring MIniatura. Bookmark the permalink.