Do you recall a song sung by Flanders and Swan called ‘The gasman cometh?’ They started with a gas tap that wouldn’t turn on and ended by calling out every type of tradesman there is. The chorus went: Oh it all makes work for the working man to do.

It’s been like that round here.  Yesterday Ric, demolishing a bit of my wall to expose the toilet soil pipe, in the course of his investigations to discover the reason for all the silverfish I found when chiselling the carpet tiles off the floor, revealed that some previous kitchen improver had plastered over the damp proof course, causing wicking, like you do.  So he removed a lot of the wall, as you would.

The real cause for concern was that I couldn’t find the ladder last night to give the ceiling two coats before the electricians made holes for the down lighters this morning. How can you lose a ladder?  It was tricky looking in the garage which temporarily had no light, which I blithely had agreed to at teatime.  ‘You won’t be needing light in your garage over night will you?’ asserted the electrician.  ‘Well of course not’, I agreed cheerfully because by then I’d had enough anyway.

The having enough anyway had started early.  I’d got up at crack of dawn, thrown clothes on, opened the doors and done the early stuff, such as locating the kettle, then, when I went back to get changed to go  and give Thomas, who was 7, his present, for lo!  I had no floorboards.  Not that that was as much of a worry as not having transport to get there, as the insurers had decided to write off the car, so the courtesy car had to go back.  Then there was the thing about all the workers needing every door in the house left open, which is fine if you’re there, not so good if you’re ten miles away and they’ve gone off for lunch.

Oh it all makes work for the working man to do.  I realised that the ladder may have been moved by Roger, subcontracted by Ric when he realised that he had no idea where the water was going, hence the war zone scenario I photographed on Wednesday.  Roger had moved everything in the garage in order to take two water pipes out into the garage and back in again.  Everything that isn’t piled on top of my kilns, such as the oven, was piled on top of the other half’s golf clubs, though some is piled on the make-your-own-arcade-games- machine abandoned by the web manager when he got a proper job. And, to be fair, some of the piles are piled on pre existing piles of other stuff, as it is a garage.

I looked at the bank account balance online today.  If you’re inclined to visit the shop and buy a doll I may deliver the package personally and kiss you.  If you’ve got fifty friends I’ll do the same for them, possibly, after I’ve finished the painting.  And the tiling.  And the cupboard doors.  We’re re-using the cupboards, for reasons of greenness and poverty.  I’d be happier if the cupboards hadn’t been standing on the drive in the storms for five days, you never think of cupboards as absorbent but they are.

I keep trying to remember that it will all be better when it’s done.  It’s always better to know what’s in your house and who has perpetrated what and where.

I found the ladder with a torch.  It was behind the third pile I had to climb over to see where it was.  So then I got two coats of paint on the ceiling and fell into bed, which was why I had to get dressed in a rush to let Steamy in to do the window this morning.

Here he is considering how to remove the lethal ancient glass: 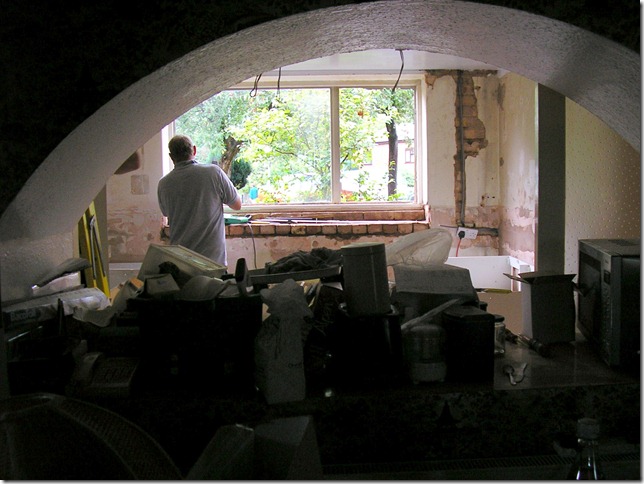 While the younger electrician installs the ceiling lights: 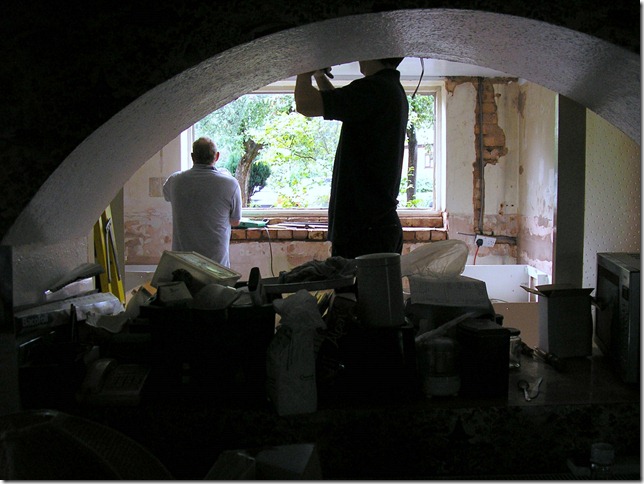 Oh I am so tired.  It would be better if I wasn’t looking after next door’s budgie as well.

It would be better if I was sleeping and not jumping out of bed with crash flashbacks.

It would be better if I didn’t have to start working when they stopped.

It would be better if it wasn’t running. leaping and cavorting away with so much money.

It would be better if this, being Friday, wasn’t the day they’ll all knock off early when I’ve paid them, so that I’ll have to start painting earlier.

It would be better if the other half hadn’t buzzed off to golf leaving me to deal with it all.  Though if he goes off to the pub tonight early, I can crack on with the third coat and start painting the walls, if we have some by then.

It would be better if I was doing all this not on painkillers.

Will it all get better? 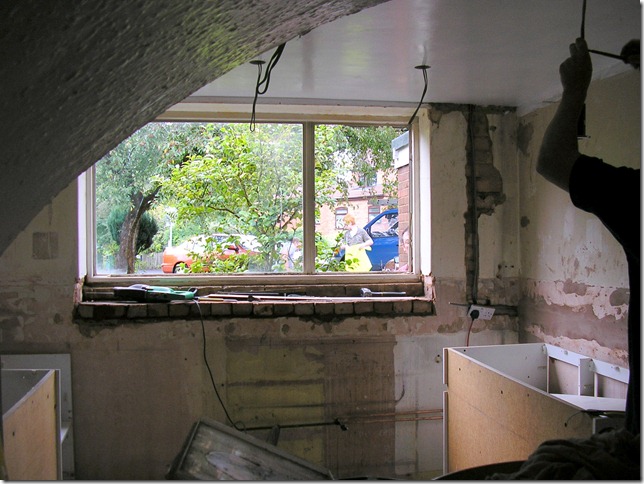 Tune in next week to see where we’re up to, if we are. (I’ll be interested to know myself.)

JaneLaverick.com – thrilling reports from the edge.  And the corner.  And half an inch above the DPC.  Plumber ho!

This entry was posted in The parrot has landed. and tagged builders, electricians, painters, plumbers. Bookmark the permalink.