I hope you can forgive the lack of postings.  I’ve been working twelve hour days.  This morning I was rung from a lorry near Bedford to say kitchen wall units would be here before eight, so I had the fastest shower ever and was downstairs, nearly dressed by five to eight, in time to clear the stuff for the charity shop from the porch to make room for the boxes.

Yesterday I painted until half past night and I’m running out of Ibuprofen gel to put on my painting and varnishing arm.

Progress, however is being made.  Before the long Bank holiday weekend, which certainly wasn’t a holiday here, this is where we were: 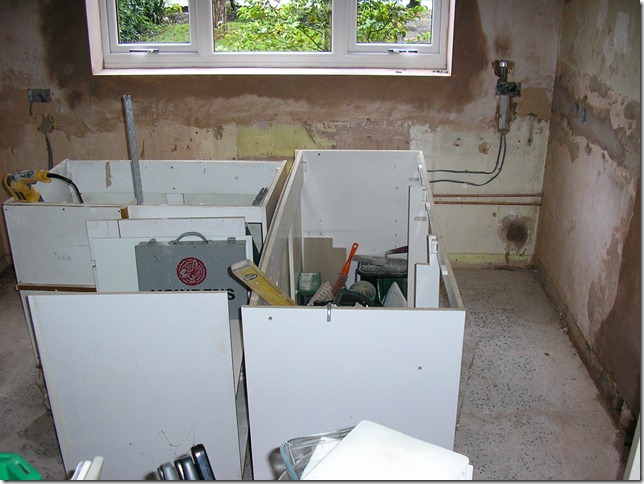 and before yesterday we were here: 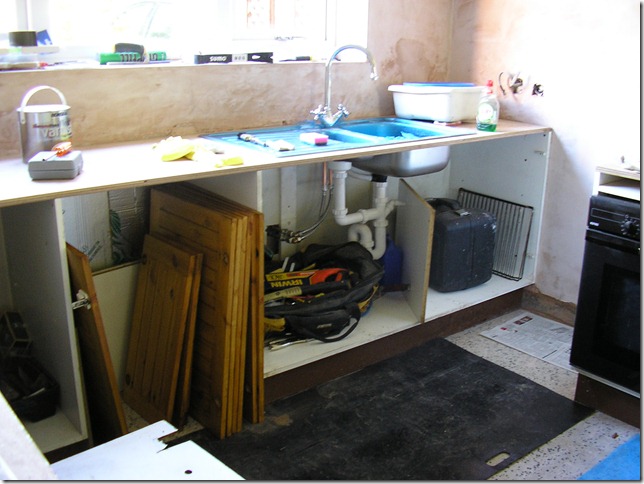 those cupboard doors have all been planed, sanded and given two coats of varnish.  Hopefully they will tone with the wall cupboards, if not match.

Since these pictures I’ve done three coats on the ceiling and one on the walls.  Some genius (me) re-sited the oven so you have to lie on the floor to clean it; it may be impossible get food in or out, that should be slimming.

Ahead of us seven square feet of tiling.

I have also, in between, just to stave off boredom, got two coats of varnish on the inside of the shed.  Today I’ll do the third coat on the floor and move in.  Finally, after several years of construction one bit of wood at a time, I’ll have a place to write in peace.

I shall end up with arms like Popeye but I won’t need to do any of this again (I sincerely hope) for twenty five years by which time I’ll have written a prize-winning novel in the shed and I can pay for someone else to do the lot or move into a very luxurious old folks home.

If there’s time I have an ambition to have a day off before I start work for Miniatura, about which, after this, I shall never complain again.

Later this week I may show you some of the extraordinary things I found in my drawers, so that’s something to look forward to.

JaneLaverick.com – the column with painter’s elbow.

This entry was posted in The parrot has landed. and tagged kitchen makeover. Bookmark the permalink.