The Queen who had to be seen to be believed.

I have filed this post under the category of ‘About artists’ because no artist ever designed their entire life of public service with as much attention to detail as the Queen.

She herself said she had to be seen to be believed, in my life I had contact with the Queen five times and believed in her as I believed the sun would rise every day.

I was born in 1951 and can very vaguely remember the family getting their first black and white television to watch the coronation when I was two, but I was nine when I actually saw the Queen.  We were on holiday in Wales when she came past in a motorcade.  As I was little I was pushed to the front.  I vividly recall the Queen, who was sitting on my side of her car, dressed in very shiny pale blue with a very upmarket version of the sort of hat my aunties were wearing at the time, like a round cushion with a hole for your head.  The Queen had a bunch of little white flowers that moved, on her hat, her eyes were very blue and she waved to me with a white gloved hand.  There was a photograph of the Queen in the car, which I have spent all morning trying to find, unsuccessfully, though I only have to shut my eyes to be there again. 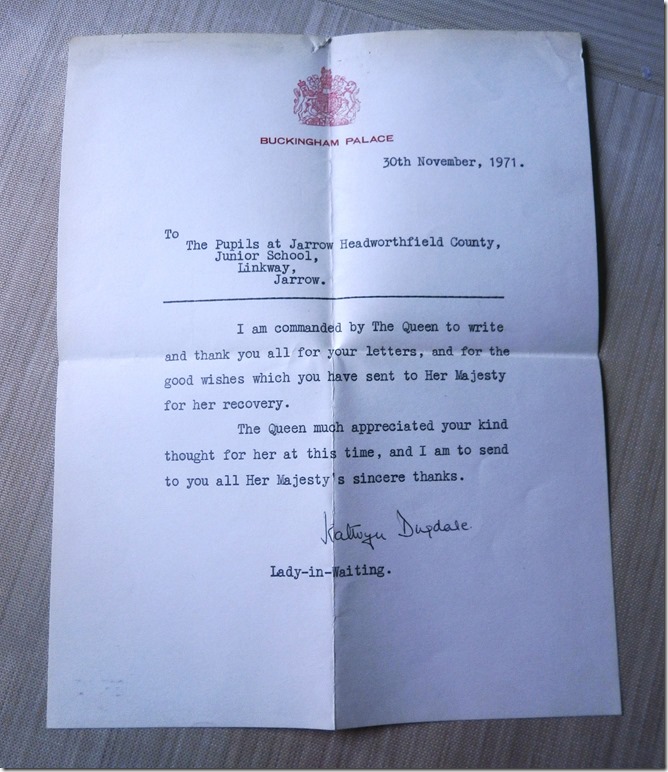 Here is my second contact with the Queen.  I was doing teaching practise in my last year of teacher training, when the Queen, unusually, cancelled some engagements as she had flu.  I seized on the opportunity to give the children some letter writing experience and the Queen some comfort from the children.  The letters from the children, who were seven years old, varied between very accomplished and very hilarious.  The letter from Buckingham Palace went into my college folder until I rescued it.

For the third contact we were in Nottingham.  The OH had followed me down to that city and found a job in quite an old hospital as a medical microbiologist.  He was so gifted with a microscope that when the six year research post into Legionnaires Disease became available it was unquestionably his.  The work was based at the brand new Queen’s Medical Centre.  As he was an employee we were in the front row at the edge of the red carpet when the Queen opened the hospital.  We waited some time.  First a minion rushed out of the new plate glass doors with a vacuum cleaner and vacuumed the red carpet within an inch of its life.  Then she beetled off, and the Queen emerged from the big glass doors, having opened the hospital, and we waved and cheered and she waved and smiled.  She was wearing a shot silk coat and a hat in matching material, brilliant blue eyes and white gloves, and she had a handbag.

The fourth contact, in the late Nineties, was the OH on his own.  He was County Emergency Planning Officer by then and was invited to a ‘thank you’ evening do for Emergency Service workers at the Palace.  Drinks and nibbles were served.  The OH was standing in a group of four emergency planning officers when an equerry stepped up, enquired who they were, murmured to the Queen as she arrived and  she talked to the group generally.  The OH, who is used to standing next to me, was surprised to discover the Queen coming up to exactly the same place on his shoulder.  The Queen and I were the same height, which proves that good things come in small packages.  Ever since that evening, I have stopped referring to myself as short; I now refer to myself as this height by Royal Appointment.

If you are a regular reader (hello again) you know about the fifth contact this spring.  Here it is again.

When the Queen had Covid and continued to work regardless, I was so worried that she would contract Long Covid, as my neighbour and hairdresser had done, by continuing to work, that I got my best water coloured card I’d made and wrote and told her about my worries.  Two days later on the news, we heard that the Queen had stopped working and was resting.  This was good but the letter from Windsor Castle, a few weeks later was an amazement, though I should not have been surprised – she was the Queen who believed she had to be seen to be believed.

It is now so hard to believe she is gone.  It is incredible to think of her meeting her fifteenth Prime Minister just two days before she died.  Working until the very end.  Being there, doing the job, being seen.

We are so lucky to have been alive at the time of this extraordinary woman.  Just a little person with a work ethic, a compassion and a presence that encompassed the world.  In our lifetimes we have known the most photographed, most famous woman in the world, who cared for the world and was always there for us.

How much we loved the Queen!  How much the Queen loved us!

Our luck is almost unbelievable, but has been seen, over the course of seventy years, to be true.

This entry was posted in About artists. and tagged the death of the Queen. Bookmark the permalink.