This column never has been and never will be anything to do with politics.  It’s about artists like you and me and what we do when life in general and relatives in particular, go a bit manky.

However, the current situation of Polly ticks, which still makes as much sense as a parrot that has swallowed a watch, is causing the UK to be a laughing stock around the world.  This, therefore, qualifies for an entry under the Parrot has Landed and other absurdities.

The OH watches the news on the BBC with great regularity, mainly because, otherwise, he would run out of things to despair of, be indignant at and generally tut over.  As we are both home at lunchtime and knocking on, we aim to be sitting at one o’ clock with soup at the ready and the TV on loudness 30, until he starts searching for his finger napkin, when it goes down as surreptitiously as possible to 25, or less if the napkin is on the floor behind his chair.  It may go back up to 30 or louder if he catches me altering it, because sitting in a pub on ‘your’ chair next to the juke box for 34 years can cause unexplained deafness in later life.

So it was that we were both in place for the extended broadcast which covered the surprise resignation of Liz Truss, Prime Minister of Great Britain and Northern Ireland for a good five minutes, as appointed by the late Queen, Queen of the same realm for seventy years and two hundred and fourteen days.  Am I alone in thinking no one has any sticking power these days?  The OH, as you might expect, had a great deal to say about it, and was torn between watching all the opinions late into the afternoon and rushing to the pub to spread his considered and lengthy views, starting with ‘WELL!’ and working up.

We are now searching for our fifth PM in six years, causing you to think, oh I don’t know, that no one has any sticking power these days.

However, the great thing that makes Britain great, is, of course, the seventeenth century.  After the Civil war in the middle of that century we settled for a system whereby we have elected politicians and an unelected monarch and they both keep a beady eye on each other.  In politics, permanence is power.  Margaret Thatcher was PM for nearly twelve years, a length of time which meant that she had been in post for longer than many of the Civil servants, who really run the country, round her.  She knew who to speak to and how to get things done.  Only one official in recent times has been in Downing Street for a similar time. 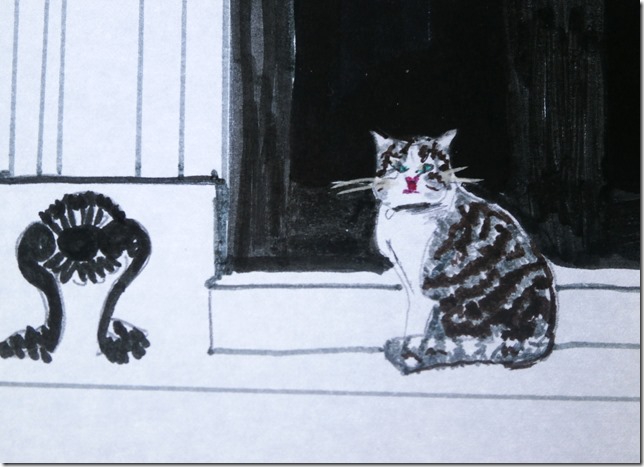 Here he is.  It’s Larry, the Downing Street cat.  He came from Battersea Dogs and Cats home in 2011 and is a civil servant.  His title is Chief Mouser to the Cabinet Office and he has met plenty of politicians and had time to form a considered opinion of them.  He really liked Barak Obama, apparently.  Wise cat.  Mr. Obama had some very good ideas for helping people but never had time to put them into practice in the four year revolving door that is American politics.

Larry knows all the ins and outs and we have plenty of time to watch him.  Out comes the podium and sooner or later Larry will be waiting by the door to be let in.  He has seen off a fox, assorted dogs and a variety of rodents.  He has been seen marching up and down the cabinet table and probably makes more sense than anyone sitting at it.

It has already been suggested elsewhere that Larry would make a great PM, the only problem being that he would have to resign as a civil servant before seeking election, and who then would sort out the mice and rats which are a real problem in central London?  Now the corgis have left Buckingham Palace, perhaps they could get a cat, or two (it’s a large building).  The Queen Mother used to use the rats as target practice, with a handgun, during the blitz.  When the OH went to the palace, at the end of the evening the royal family disappeared into the furniture (behind a bookcase that was really a door), in a building riddled with hidden passageways, inefficient plumbing and massive catering.  Pretty much a holiday home for rats.

Talking of rats, who will be the next Prime Minister?  Any ideas?

The only things worse than a leader on the repeat election button is a dictator.  There have been quite a few of them in history, sooner or later they go bananas and end up hanging, hiding or thoroughly disappeared, having managed in the interim to make vast swathes of humanity either deeply unhappy or seriously dead.

It just makes you glad not to be a politician.  Being an artist will not make you rich in your lifetime (though you are likely to enrich dealers the minute you are dead.)  It won’t give you any sort of power and only the freedom to starve in the traditional garret, or the freedom to block the sink with plaster of Paris.  It won’t give you those hand-out-the-sunglasses teeth or the carefully managed hairstyle, or the need to go jogging in public to prove you haven’t got any health concerns.

All it will give you is the time to care for your relatives, the time to stand at the sink scrubbing the paint from under your fingernails and absolute gratitude for the knowledge that you are not a politician and therefore, most of the people who know you, like you.

This entry was posted in The parrot has landed. and tagged humour. Bookmark the permalink.