One of the joys of Miniatura is meeting miniaturists for the first time.  I love to hear of people’s houses, what they are doing with them, and, sometimes,  be invited to provide the residents.

At Autumn Miniatura I was delighted to meet Mat, having a lovely day out with his daughter, and hear all about the house they were embarked upon to represent the famous book by Charles Dickens, A Christmas Carol.  Mat thinks this is the perfect Christmas story, that it is perfectly formed and still resonates today nearly 180 years after publication.  He reads the book every Christmas, sometimes aloud to his family.

I am always impressed by anyone reading to their children and was happy to be commissioned to make Scrooge and The Ghost of Christmas Present, in twenty-fourth scale.

After the show I set to work, I had a doll in mind which you have already seen in pieces.  It is the fourteen part, internally jointed doll that has been on the drawing board for so long.  Part of the brief was that Scrooge had to be reacting to the ghost, this doll was just the job – with independently moving hands and two part limbs he could really take the pose.  I made several heads and emailed photos of them for interview by Christmas Carol committee.

Here are the finished dolls. 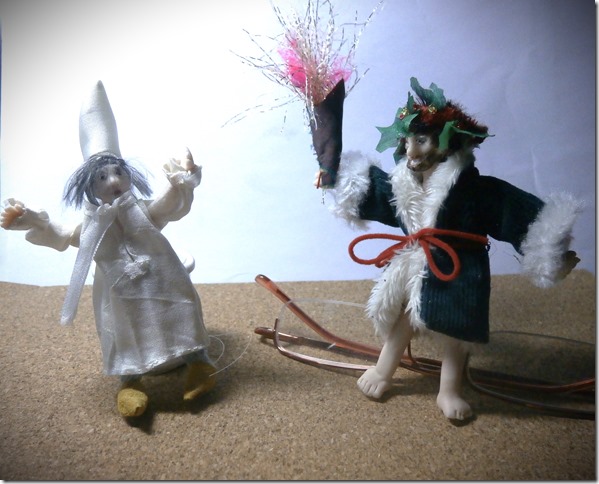 Scrooge is horrified, maybe the flaming torch is alarming, maybe it’s the size of my specs or maybe he’s just seen a ghost.

Mat has a great advantage which I’m sure would be envied by most miniaturists; his brother makes dolls’ houses, how very helpful is that? The house was completely made by hand, with a beautiful staircase, lovely doors and invisibly fitted lighting.  You can see more of these houses at www.creativedollshouses.co.uk.

Mat’s idea was to create a series of vignettes of the book within rooms of the house.  Like any furnisher he spent a lot of time mulling over what to include. He says having Scrooge in the bedroom was an obvious choice.  He is seen sitting with his bowl of gruel looking shocked as he hears the bells ringing around the house just before the ghost of Jacob Marley appears. 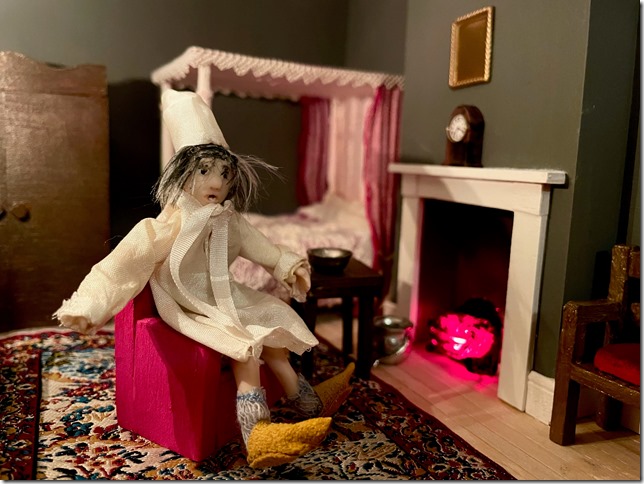 Then there is a bright and jolly room that is dressed for Christmas with a feast, where the Ghost of Christmas Present awaits to show Scrooge the error of his ways. 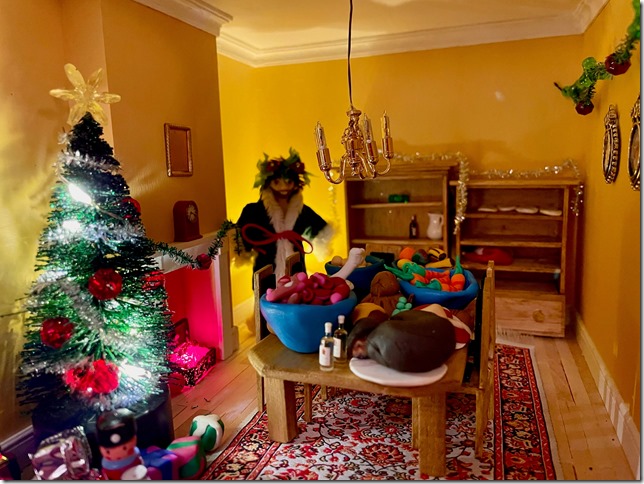 Downstairs is a room that is much more basic and functional as it is the home of Bob Cratchit and family.  It is poorer but still ready for Christmas and a figure of Bob and Tiny Tim can be seen entering. 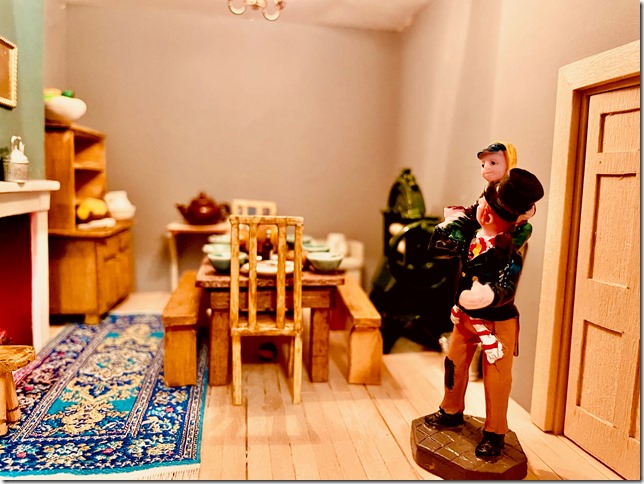 Finally there is a street diorama.  Here the counting house of Scrooge and Marley is lit up, opposite the inn and near the church.  Outside is a Carol singer.  Peering down the lane it is easy to imagine this being a gloomy Dickensian vista. 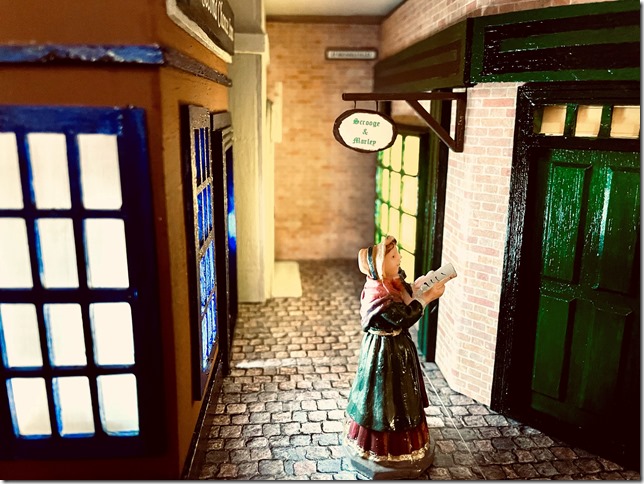 The beautiful house was modelled on a house in Shrewsbury where a film of A Christmas Carol was made.  Mat and his family made most of the furniture and the food, very well indeed, don’t you think?

I think Mat, inspired, has captured all our Christmases, encapsulated in this wonderful house that Charles Dickens would be so thrilled to see has faithfully represented his story.

This house reminds me how happy I am to be a miniaturist, happy to be part of a tribe that is willing to take the time to gift themselves to their children in houses that represent the past, are made as a present and will be heirlooms in the future.

This entry was posted in About artists. and tagged dolls house of a Christmas Carol. Bookmark the permalink.