This posting may be rather more brief than I’d have liked, I’ve only just got possession of the computer, late at night.  My husband, who is doing an OU degree in Astronomy, is behaving like a student.  All through the fine weather he lay in the garden with a glass of wine and all the time in the world to swat.  Suddenly there’s a completely unsuspected essay deadline of the day after tomorrow, so next door’s budgie, having his Easter holidays here, and I, have to sit in silence while the great scholar does difficult sums and woe betide either of us if we rattle the bars or chirp at the wrong time.

Back in the little house we’re up to the doors.  I’ve decided to make a separate bathroom and toilet.  Although the house is Victorian, the time frame in which I’m occupying it is the early 1950s.  To replicate a house in any size you need to know which era you’re depicting.  New miniaturists sometimes make houses occupied at the time they were built, which all houses were, but not for long.  Very few people living in a Georgian house will still be using the original Georgian kitchen.  In my house I’m going to pretend the internal Victorian doors have been replaced with the sort of mock Edwardian panelled doors so popular in the thirties and, because of wartime restrictions, continuing right into the fifties, until the first of the TV DIY men, Barry Bucknell, turned them all into modern flush doors with the application of hardboard and paint.

Having decided to install a bathroom at the back that will only be seen through the window, the first thing I needed to do was to move the window along.  In card this is just a matter of cutting a longer hole, moving the window unit and back filling the hole with card. 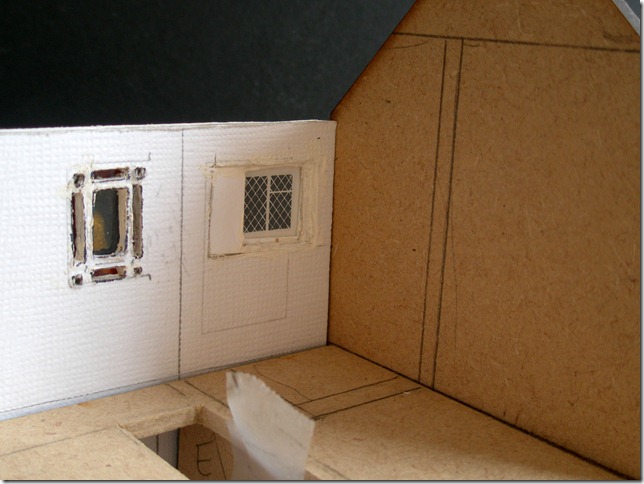 I mocked up the wall dividing the bathroom from the toilet with thin card before cutting in artist’s board.  Scoring the board with a half cut enables it to bend to give me the attic floor; a double wall with the tops scored and bent at right angles will support the top attic flooring for me. 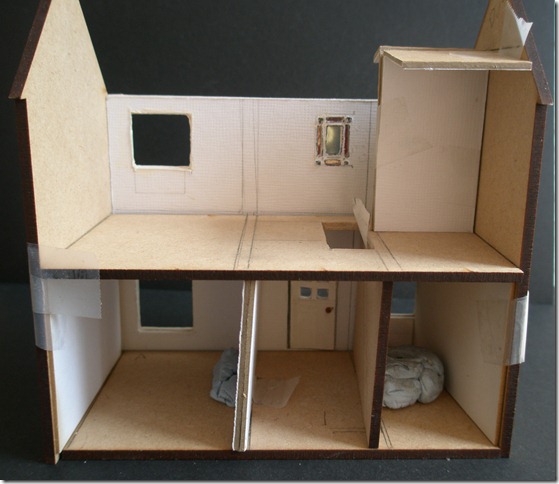 While fiddling about like this it’s a good idea to use a set square so the walls will not lean.  Keep checking that the house is firmly together, I have mine taped. Use low tack tape or stick the tape to your clothes before applying it to the house, which has the same effect, and is, obviously, why fluff was invented.  When making new rooms it’s a good idea to make sure they are big enough to contain the furniture they need to contain.  I’m using the plastic furniture until I’ve made some in porcelain for us all.  The plastic sizes are by no means exact.  The bath is big enough to seat the doll but the sink is far too high. 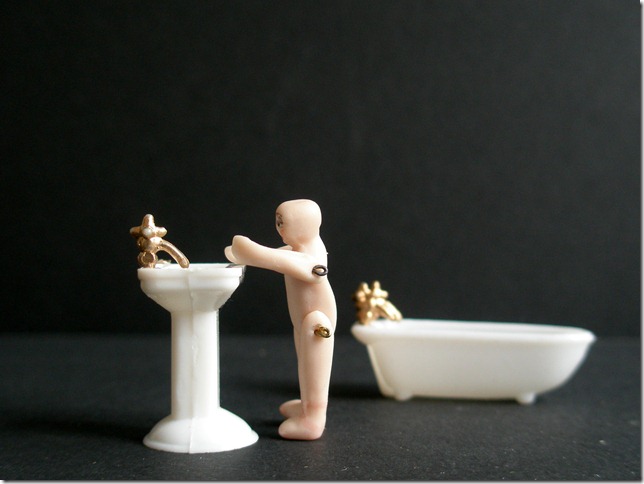 Many dolls’ houses are treated as theatre sets, the furniture is arranged for the benefit of the viewer.  I, however, am going to continue to pretend a giant ripped the wall off and site the fixtures as if the wall was there. 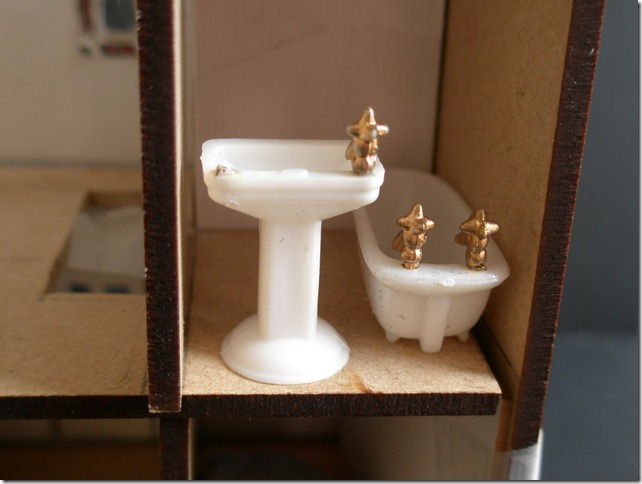 I’ve drilled holes under the sink and the bath to install water pipes.  This plastic furniture is not strong, as you can see, one of the taps detached itself. If you do want to use this and you’re trial fitting, it’s a good idea to keep it in a bag or a box because bits will get lost forever, or until you’ve bought a new set.  I also need to check that there is room for the loo 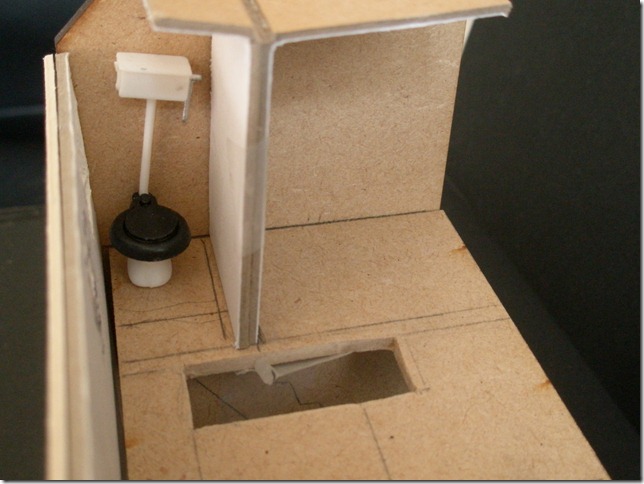 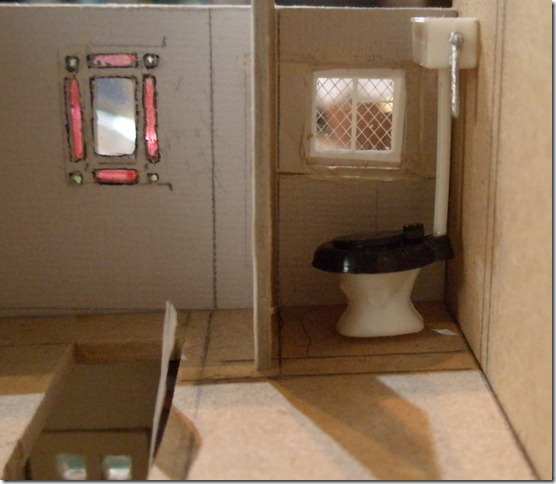 and then draw the position of the walls after checking with a set square.  I’ve also recut the archway because I’m putting the ceiling, which was not supplied, up into the roof space to give a cottagey feel to the upstairs.  Whether original or a forties ‘improvement’ the exposed beam that this will become is just right for the time. 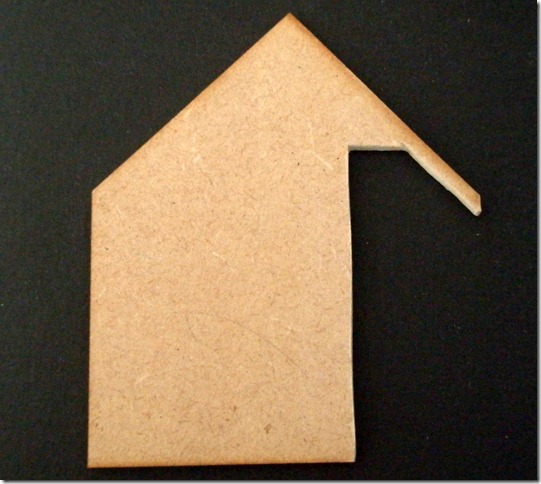 There is a theory that all architecture since the twenties has been architectural pastiche; everything from Poundbury to Sainsbury’s has bits of everything else in it.  Could be, of course, that future ages will regard sixties brutalist concrete blocks as a golden age of something or other.  Golden age of planning blight, do you think?  Maybe.

Meanwhile we now have a wall to stick a fake door either side of.  To plan in tiny scales we need tiny help.  Graph paper is your friend.  Measure some real doors and divide by forty eight, which brings you out at just over an inch and a half high and half an inch wide.  I’m going for the panelled doors, that thought they were Edwardian revival but actually have Forties proportions.  You could measure exactly but it’s much more sensible to go for the look and cut on the graph paper lines. 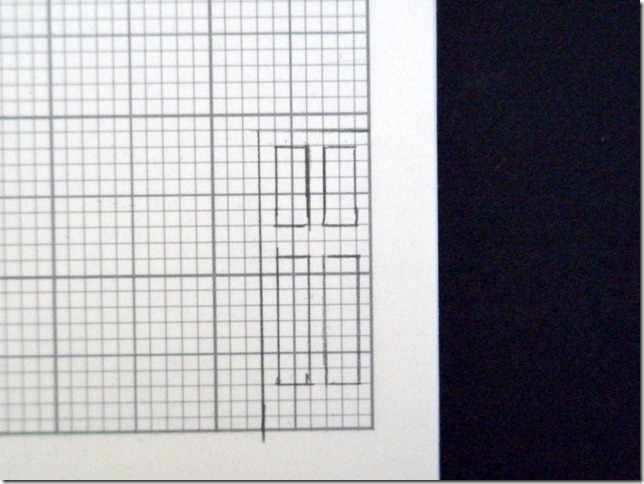 Here’s my design.  I’m going to cut this out to use as a template for drawing on to the weight of card you would have in a post card or greetings card. 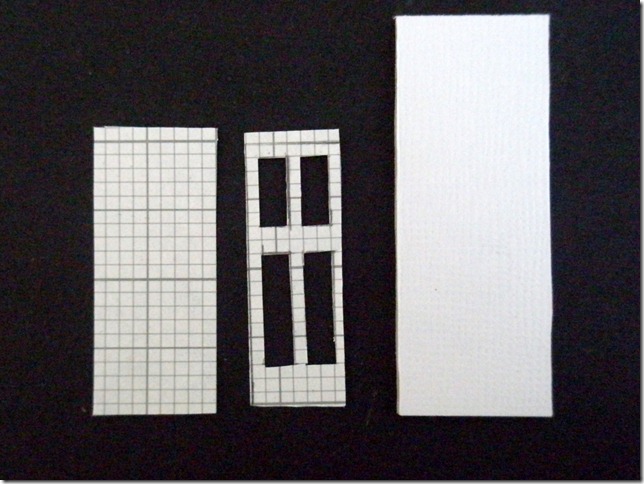 Here it is and a surround just one square bigger and another one square bigger than that to simulate the wooden moulding.  Here’s the wall too, I shall make sure it fits.  Now I need to cut some card doors and surrounds. 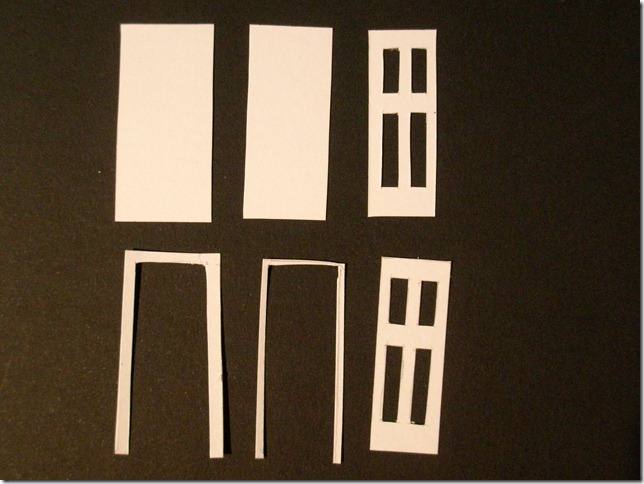 I’m gluing with PVA for strength.  Dry paper crafting adhesives just won’t cut the mustard in something we want to last.  My new real kitchen floor is stuck together with PVA.  I’m using the variant known as high speed tacky glue.  To cut I’m using a scalpel, a small metal ruler and a self-healing cutting mat.  I am going to glue the whole door to grey card. 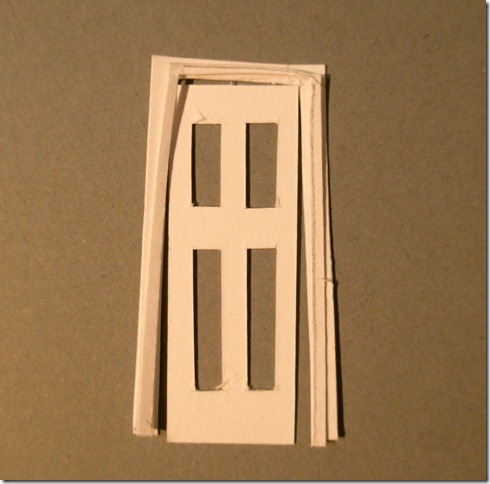 Here it is stacked up 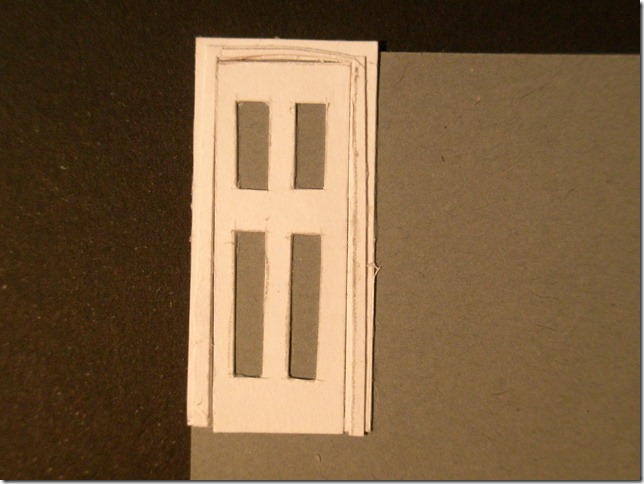 and glued.  The gaps are deliberate and, with the grey card, simulate the gap round the edge of even the best fitting door.  When it’s painted the grey on the panels will emphasise their depth and the gap, left unpainted, will just ‘feel’ like a gap.  If this looks very coarse remember it’s all quite small and because of time constraints, I’ve done this first door for photography in a rush but the little details like the gap, will help us to believe.  I’m using Chinese White watercolour in a tube because it has the right period ‘off white’ look.  As it’s matt I’m varnishing with clear varnish for the areas that would be gloss paint. 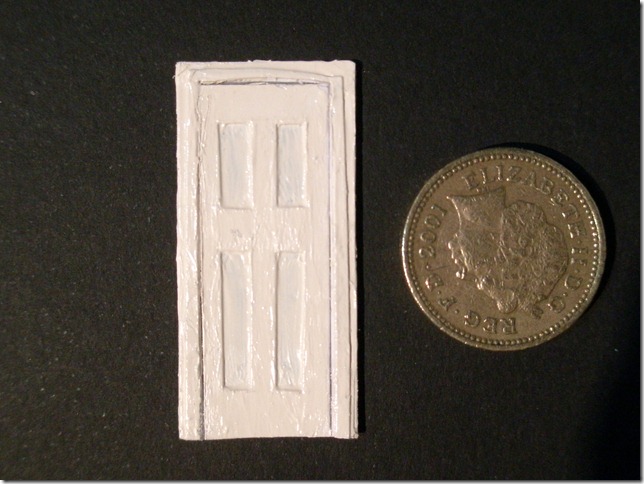 All I need now is a handle and then we can shut that door!  I’m making 14 doors, some of which will open.  If you’re copying this, don’t assemble and paint the opening doors yet.  I have cut extras and saved the templates in a little plastic bag in case it all goes horribly wrong so I won’t have to start again from scratch.  The best doors will go in the most visible places; any that came out a bit naff will be in places where they can only be seen by squinting through a window.

The next posting in 48th may be short or long, depending on the state of the universe and whether or not we’ve managed to work out how far the next galaxy is.

‘Listen to this Jane, does this sound sensible to you?  The mass of the sun, which I did last week, used in calculating the distance, can be done by… Jane……are you listening to me or are you cutting little doors out?’