This is going to be a small posting because of the stage I’ve reached.

I have been doing the doors.  If you were waiting from last time to know what to do with the opening doors, here it is. 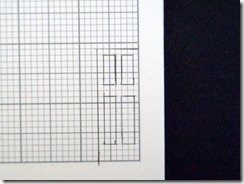 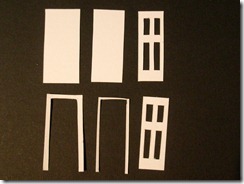 To recap briefly, for all internal doors, opening and fake, I worked them out on graph paper, cut them in thin card and glued them on to darker card to help with the illusion of depth before painting and then varnishing them. 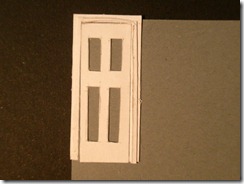 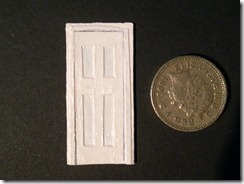 The colour is key in smaller scales to establishing period because you can’t use as many accessories to clue into the era as you can with bigger houses.  The only right white I could find for that ubiquitous post war off-white was a tube of watercolour Chinese white.  I did start using it straight from the tube but it was leaving ridges.  Now you may say that in a door the size of a small coin, who cares?  Everyone will, because going downscale always magnifies the faults.  You do enter into the imagined house and see it as a house.  Remember when we were standing on the landing? 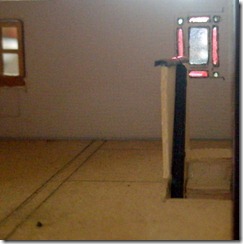 I can barely fit the end of my nose on that landing but because we know it’s a house and we know how big houses are, we’re in there, wanting to go and look through the window.

So I watered the paint down very slightly.  This is a bit of a trade off between thin paint and wet paint.  I am currently eating supermarket salad bowls because they come with a small plastic pot of salad dressing (which I wash down the sink) with a clip on lid that keeps paint, glue and plaster of Paris wet for a while.  So after three thin coats and varnish I cut the door surround free of the door on the opening doors and afterwards painted the edges.  You can see how much better the finish is.

I also realised that I had no surround on the inside for the back door. 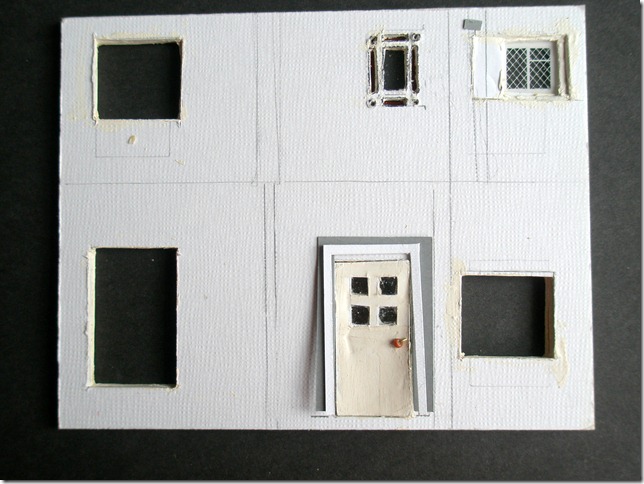 So now I have.  If you are following this in practice, do not glue any door surrounds on yet because we’ll wallpaper or paint first and glue the surrounds on afterwards as we will with cornices and skirting boards.  In larger scales if you’re after realism, you can do it in the correct order; you can even cut the wallpaper into 12th scale roll sized strips.  Downscale we’ll have to sacrifice realism for pragmatism; big houses typically have an unfinished room or two, quarter and below mostly do not.

The thing keeping me awake at nights is the lack of pieces.  In much smaller scales it is not possible to construct the room or the house first and then get your head inside and decorate.  There are several ways of addressing this; the one I’m using with this house is to do each room on each floor as I go so that each floor is complete before you stick the ceiling on.  This means that you have to have everything ready before you get to the glue.  In 12th scale and 24th you can develop the story as you go, you can put all the wallpaper on first and then shop around for the right fireplace whilst having a little go at the bedroom. Or even, perish the thought, a day off. In 48th scale everything has to be in the box before you put the lid on.  You need to tell yourself the story of the room quite early on and do all the shopping first.  Things that can be added later must be strong enough to be manipulated with tweezers and highly susceptible to glue.  Once I have made a whole lot of things in porcelain we’ll be laughing, until then I need to invent fixtures and fittings to glue as we go.

I think I may need to break off and make some dolls to size things and then make the things to size.  Whilst houses are variable in any scale and more so as you get smaller, people are available within a fairly narrow range of sizes.  So whilst I do measure, I really size things up by comparing them to how they look against a person.  This is easy for everyone to do because we all know how big people are. People have been a bit thin on the ground in smaller scales so as this is what I do, I had better get my finger out and get on with it.  Meanwhile fitted doors will be up next in another posting this week.  I already know the answer to the question: can a small scale house be as absorbing as a 12th scale house?  I’ve just been to the supermarket and filled the fridge with ready meals and I was up at three, thinking about cornices: do I want the cornice stuck to the front removable wall or dangling off the underneath of the floor above?

So yes.  The answer is yes.  You can live in your head in a house you can fit on your hand, moreover I have been talking to manufacturers and makers and hobbyists who are going to help to make it a reality for everyone easily, hopefully by Autumn Miniatura.

More later in the week.

JaneLaverick.com – nosing around on the landing.