How to win a house.

Following hot on the heels of news in the papers about a staggeringly huge lottery win, I thought you might like to know how to win a house.  It doesn’t require any special knowledge, other than that which I shall convey here, the financial outlay could be minimal and the house will be lovely.  I should inform you that, contrary to your possible expectations, this is not a once-off opportunity.  There has been a chance to win a house in the way I shall tell you about – any minute now – twice a year since about 2007.  The houses up for grabs, whilst differing in style, all have one thing in common.  They don’t come ready-built but will require slight input from the house owner.

At this stage, if you regularly watch the same sort of television programmes as I do, you may be feeling apprehensive.  I love those programmes in which people who have bitten off considerably more than they can chew and have been living, sometimes for years, in building sites, are rescued by a television team. The cheerful TV team steam in, breeze blocks and RSJs at the ready and in five days run through a massive budget and gallons of unlikely coloured paint to produce a lovely abode for the abiders to walk into and burst into tears.  I find those programmes very entertaining and when they are well done it seems obvious to me that they are genuinely helping people.

Am I letting the lucky house winner in for a lifetime of living on a building site?  Is it going to turn out to be more trouble than a lottery win, creating envy and hatred among the neighbours and former friends?  Will it be extra work for the owner of two domiciles endlessly condemned to ferrying back and forth and actually living nowhere but in a suitcase?  Will it attract additional taxes?  Is it like time share where you get the third week in November somewhere chilly with a view of a railway yard?

Perhaps at this stage it might be helpful to show you a picture of the sort of house you could win.  What are you hoping for?  Georgian town house?  Seaside villa?  Victorian terrace?  It could be any of these. Or even something else entirely.  But it will be a bit like these. 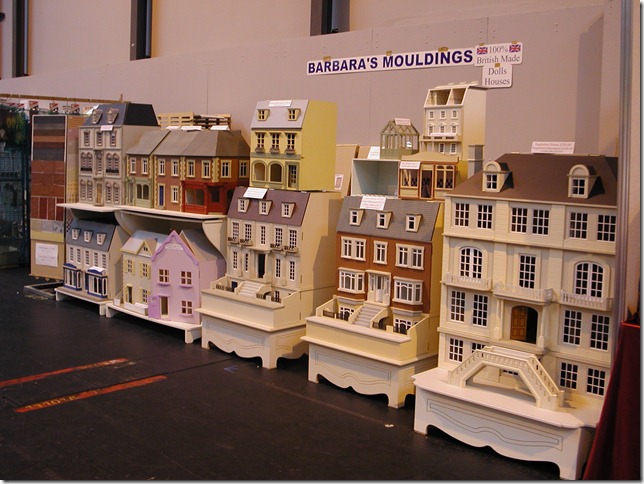 These lovely houses, photographed courtesy of Miniatura, are from UK dolls’ house manufacturer, Barbara’s Mouldings.  Yes the house you could win is a dolls’ house!  Specifically a dolls’ house kit.  And what houses they are.

Barbara’s Mouldings, run by Barbara and Graham, has been going at least 15 years.  If you are a miniaturist who likes visiting dolls’ house shops you will probably recognise these houses because they are widely available in  shops in the UK and abroad.  For new hobbyists I should point out that, in the main, these are the types of houses referred to as box backs.  The front is hinged to give access to a completely enclosed back, usually with different floor levels and room partitions.  This is a very traditional British configuration of house, ideal for standing against a wall and very good for keeping the dust off the contents.  Barbara’s Mouldings houses include basic stairs, which is a bonus you will appreciate if you have ever tried to find stairs to fit any other house.  The houses, made of MDF, are strong enough for many years of use.  They are mostly in 12th scale, though there is one 24th scale house which you can see standing right at the top in the picture next to the greenhouse.

The houses are designed by Barbara and Graham in a joint effort of designing and making, in styles that reflect British architecture with a slight fantasy element.  Usually available to trade buyers, the houses  visit just one public show, which is Miniatura, probably the only place you could see them all together and certainly the only place you would have a chance to win one, each and every show.

A different house kit at every show is donated to the Cancer Research UK stand, which is run by Pat Cutforth, the stand itself being provided by Miniatura.  Everything on the stand is a donation; space is at such a premium that gaps are refilled throughout the weekend as items are sold.  The winnable house now has a special space where an assembled version stands over the weekend.  Tickets are sold by voluntary donation; those who can afford a small amount have just as much chance of winning as visitors with deeper pockets.  Graham and Barbara enjoy deciding which house they should give, though they are somewhat constrained by the space available to display the prize.  The Barbara’s Mouldings way of giving, inspired by family and friends who had cancer, is much appreciated by the show visitors, one of whom will go back home with a wonderful surprise house.

Pat Cutforth raised £10,500 last year for Cancer Research through sales at her farm and on the stand at Miniatura.  Some show visitors bring donations of anything dolls’ house with them, other items are donated by exhibitors and some are miniature kits made by Pat and her team.  Throughout the year Pat runs very popular courses on how to make dolls’ houses and miniaturise life in general.  Pat is having a fantastic sale at her home on November 5th, entry to which is free.  There are houses, room boxes and shops in many scales and just everything dolls’ house you can think of.  Every penny raised will go to Cancer Research UK.  The sale takes place from 10.30 – 2.30 at Shaw House, Lockeridge, Marlborough, Wiltshire on November 5th 2011; there’s a map on Pat’s website.

Details are on their website, which is still under construction but does have some pictures and names of houses and their interiors to dream about and, maybe, even, fingers crossed, win at the next Miniatura.

This entry was posted in Miniatura and tagged Cancer Research Uk, Charity donations, how to win a house, Miniatura charities, Pat Cutforth. Bookmark the permalink.

One Response to How to win a house.