I am not a great fan of some garden creepy crawlies.   At this time of year when I’m clearing out old compost from pots I’m not thrilled to discover minute snails, hoping to over-winter in a cosy pot to be ready to breakfast on whatever spring bedding I supply when the frost is over.  These pests, while annoying, are fairly easy to pick out by hand, tedious though it is to sift through the soil.

I’m very keen on ladybirds.  Ladybirds eat many of the garden pests I can’t catch, such as aphids and assorted mites.  I try my best to be ecologically sound and chemical free in the garden and, assisted by my ladybird friends and some organised companion planting, I mostly succeed.  Nature is good at balancing out the forces of good and evil; a glut of aphids is swiftly followed by an increase in hungry ladybirds. 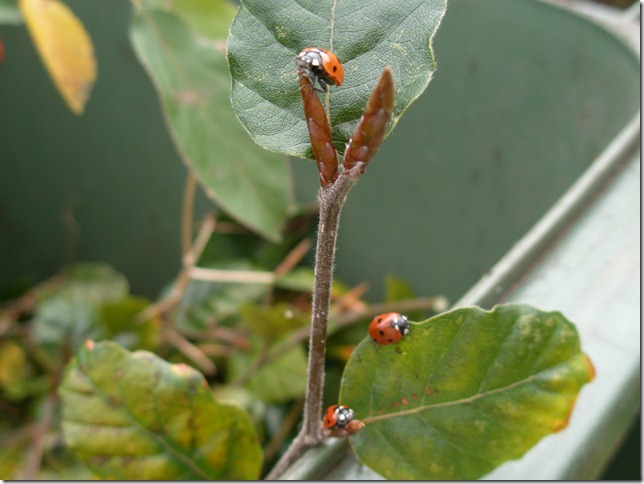 In the 70s when I was teaching at a language college, I accompanied a group of students on a trip to the English seaside.  In that year there was a plague of greenflies.  They were everywhere.  Early in the trip three new students decided to practise their English by buying ice cream.  They went into the shop, at their insistence accompanied by me in case it all went wrong.  I wasn’t needed at all, they all managed to buy vanilla ice cream cones and were very pleased with themselves and the ice cream.  Their triumph was short lived, however.  As they opened the door to leave the shop the greenfly descended and instantly the white ice cream turned pale green.  It took a great deal of pantomime assisted by dictionaries to explain that this was not a phenomenon normally associated with the British seaside.  As we stood in the doorway chattering multi-lingually, other ice cream purchasers, not of our party, emerged from the shop to find their ice creams suddenly green. What had been  tragedy when personal, in happening to others, accompanied by the horrified facial expressions of people about to lick greenfly, was wonderfully funny.  The students insisted on standing outside the shop for some time to laugh at emerging cone bearers before being persuaded indoors to eat ice cream without the bugs.

I didn’t go the following year but was regaled with tales of ladybirds in such numbers on car windscreens as to make driving hazardous.

This autumn when pruning the hedge and old flowering cherry tree, ladybirds were much in evidence.  Every time I put the branches in the green bin I was putting in ladybirds with them.  Here are three trundling around one twig. 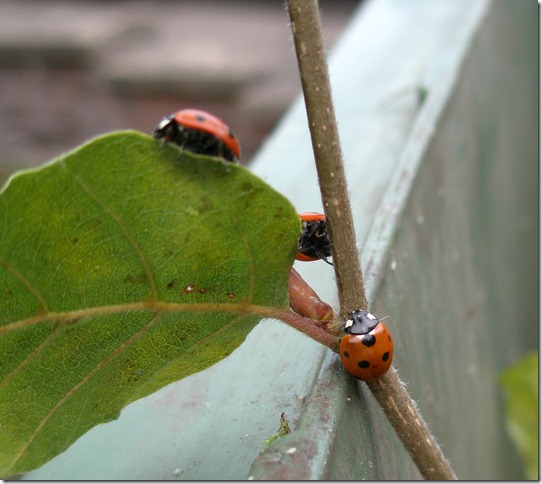 Seen in close-up they’re like miniature tanks, all shiny and armoured on the outside with a pair of comical knees underneath. 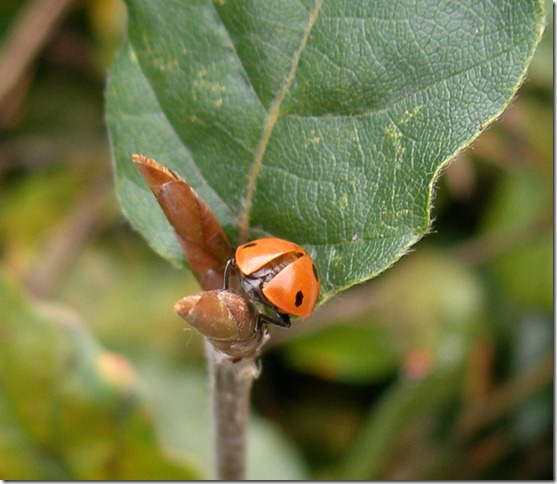 I think they were probably present to eat the whitefly that mass on the hedge.  I never do anything about the whitefly, they can’t hurt the beech hedge which is strongly established; as it is a boundary we just have to disturb it twice a year when it is cut.  The only action I need to take is to make sure my friends the ladybirds have all trundled out of the green bin before I close the lid.

Look out next week for a final round up of this Autumn’s Miniatura.

This entry was posted in Nostalgia and tagged gardening, ladybirds. Bookmark the permalink.