Keen readers will already be aware of my extreme enthusiasm for the fantastic threads that I bought at the last Miniatura, without which I could not have done the 48th scale doll dressing I’ve been busy with for the last few months.

Many years ago I was given a piece of experimental silk gauze in, I think, 120 count, meaning 120 threads to the inch.  I had entered a Miniatura competition to do some miniature sewing.  This competition, sponsored by Miniatura and David Kilpatrick, led to the foundation of the Miniature needlework society, who have been exhibiting virtuoso needle skills at most subsequent shows.  I did not win, being easily beaten into a cocked hat by almost everyone else.  My entry was based on the front of a Stuart casket in St John’s museum in Warwick. 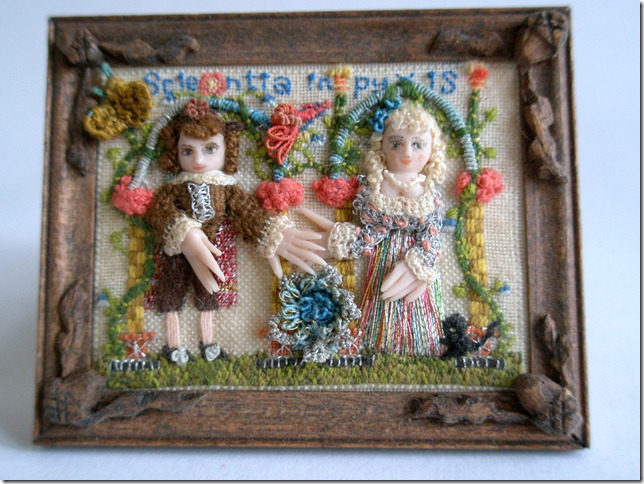 After the competition, having been given the silk gauze to do tapestry upon, I searched and searched for any silk fine enough to go through the holes.  At the time I was helping in the library at my son’s junior school and actually collected hair from the children to sew a sepia picture, having determined that this was the only substance fine enough to do the job.

Would that I had met John Cunningham, the owner of Langley Threads and Pearsall’s Embroidery, then!  However, cometh the hour, cometh the man, which, finally, he hath, (accompanied by Carol), enabling me to spend the last few months dressing these quarter scale dolls.

Do you remember last summer when I was searching for the most typical man of our time, finally alighting upon TV remote control man?

Bless him, I still think this is hilarious.  Want a closer look? 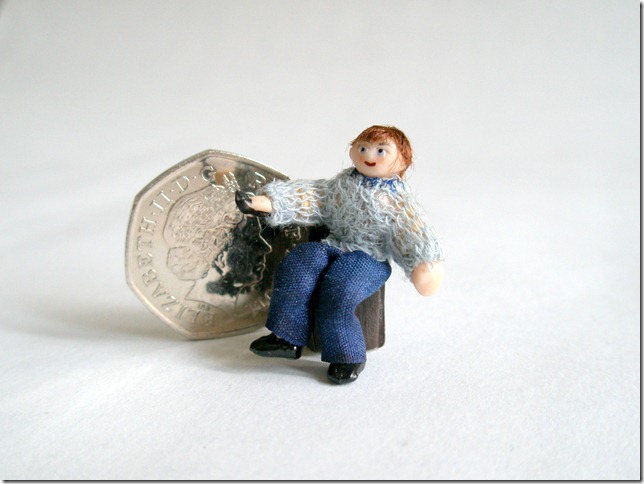 Ho, ho, ho, ha, ha, ha, it’s the most typical pose of a man of the twenty first century, (well round here it is).  I just love the power crazed little zapper. 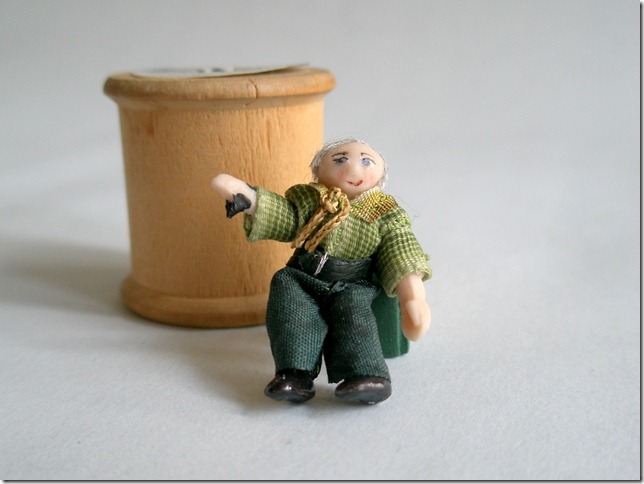 In Victorian Times, apparently, men used to wield the poker (for the fire) with similar enthusiasm, perhaps I should do Poker Man for grandma’s house?

I have dressed other times.  You can now have a terrific Tudor  whispering sweet nothings to his mini wench, less than an inch and a half tall. 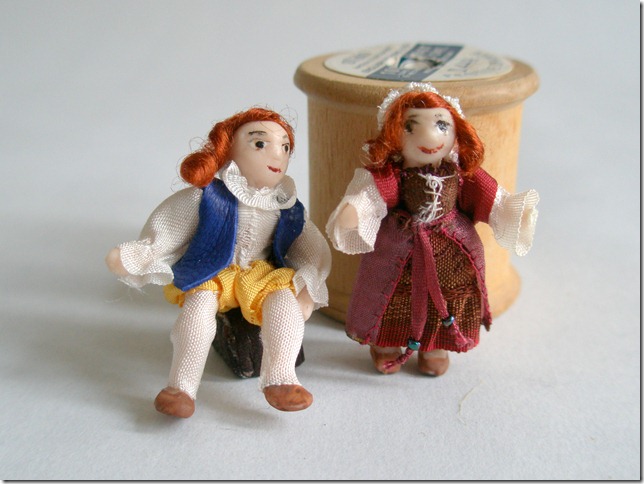 You could revisit little Mr Darcy and tiny Miss Bennett 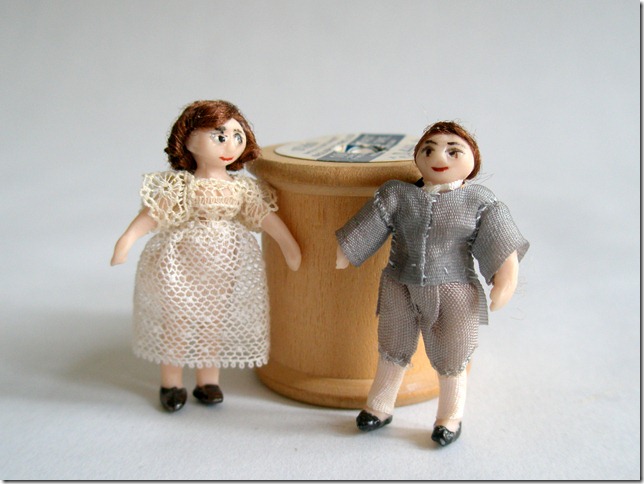 or have a heart throb 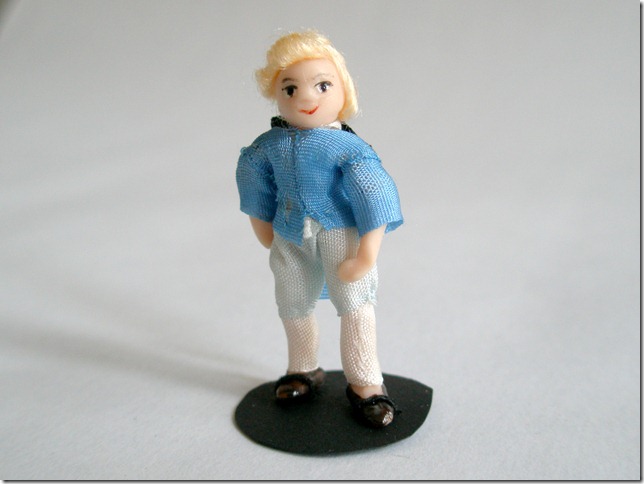 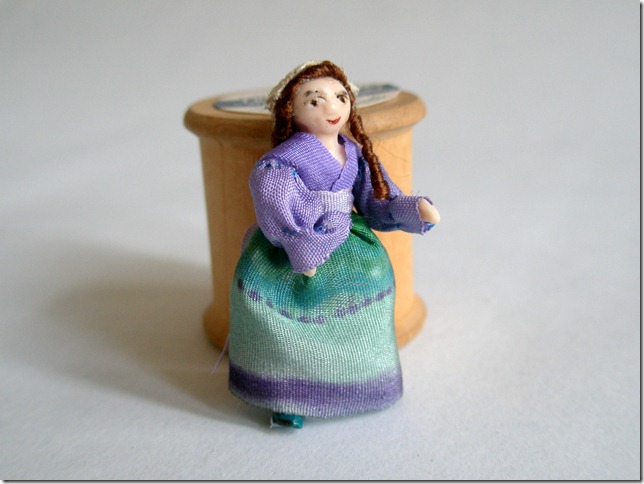 in all the usual eras but just very small and not one stitch of it would have been possible without these fantastic silk threads; if you can see any threads here, it’s because I didn’t have the exact match for the silk ribbon in which the dolls are dressed.  I have a list of colours I want to buy this time.

The threads are a fine continuous filament which doesn’t: twist, fray, tie itself in knots, do stupid loops, catch on rough places on your hands, break, ravel, twizzle or any of that stuff which thread of all thicknesses is prone to do.  It has to be one of the best behaved threads I have ever sewn with.  The colours are beautiful and, at the show, you can pick your own and fill a dear little box with the colours of your choice.  Here is one of the boxes I’ve been using all winter with my choice of colours 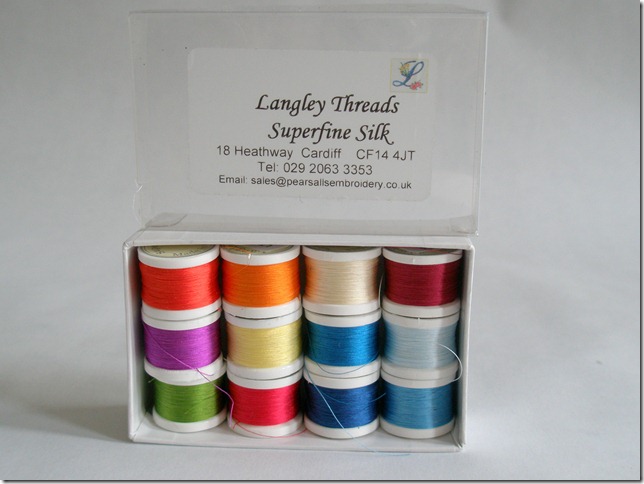 but if you’d like to see a different box, rush off to the Miniatura website to see the beautiful box of threads you could win (yes, win!) at the show simply by buying the show guide as you enter.  How fantastic is that!  Visitors on  each day will find, as they open their brochure and gaze at page 1, that there are spot prizes one of which, each day, is a box of these fantastic threads.  There are other prizes too, which will be revealed in time, on the Miniatura website.  All you have to do to be a winner, is purchase a show brochure.

To be fair, the show brochure is a must-purchase in its own right. I have an archive of brochures from twenty five years of visiting and exhibiting.  The information, which is updated every time, comprises the status of the exhibitor, whether supplier, craftsman, or retailer, full contact details, including website and a brief description of the exhibit.  There’s also a floor plan, which the very organised mark as they walk round so they can find the table with the item they wanted to buy, before they got distracted, again.  (You will find Langley Threads on stand L13.  You’ll have to excuse me banging on about these: occasionally, over the course of the last quarter of a century of miniaturising, I have found something which I think miniaturists will just love, in which case, as you might have noticed, you cannot shut me up.  Get some, they’re brilliant; I have not found a needle yet that you cannot thread with these easily, John says you can even use them for machine sewing, which is amazing, though I haven’t tried this in case I might waste some. I am so mean with these, if John stops making them I cannot imagine who could replicate the feat.)

At this show there’s a bit of a coup.  For some time the organisers have been encouraging the full size examples of the architecture which we miniaturise with such enthusiasm, to exhibit.  Whilst it’s a bit tricky to get an entire antique building into the hall, what they have got, not just one but four of, are organisations that promote and conserve Britain’s wonderful heritage.  At the show for the first time will be exhibits by Wightwick Manor arts and crafts house, The Black Country Living Museum, The Ironbridge Gorge Museum Trust and the Avoncroft Museum of Buildings.

Any one of these would make a wonderful day out for a miniaturist engaged in reproducing the past but it’s a first time, very rare treat, to get all four of these formidable museums in the same place at the same time.  You can have the utter luxury of researching the miniature and the full size all under one roof, in one day.  If you are in the early planning stages of an new build, I cannot imagine a more auspicious start to the project.  Years ago I spent a day at the Avoncroft museum and was utterly inspired.  This museum set about rescuing historic buildings and rebuilding them onsite in 1967 and now has 25 buildings of all eras from mediaeval to a post war prefab to visit.  Over my years of interviewing miniaturists for magazines, I found large numbers of professionals who owed a debt of accuracy and atmosphere to the Avoncroft museum.

As I promised last time, here is a snippet about Willow Models.  Martin has produced quantities of these wonderful 48th scale stairs. 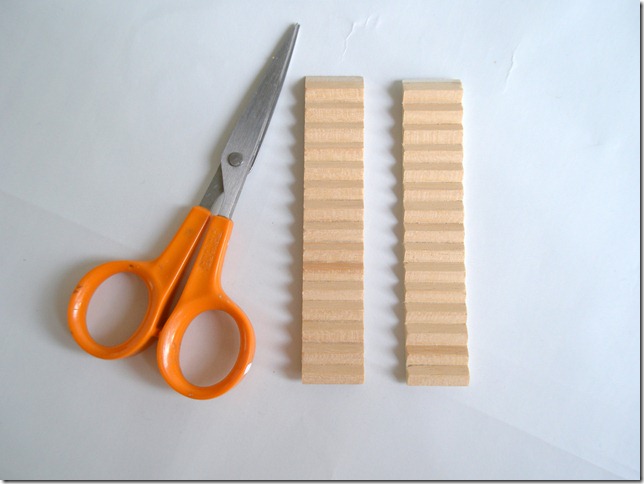 Last show, having struggled with the stairs in my 48th scale house, I thought it might be time to call in a proper woodworker, so I asked Martin if he could have a go, I also asked if he could make the result easily alterable for miniaturists like me, who do possess a small saw but are happier with a craft knife.  If I turn the stairs sideways 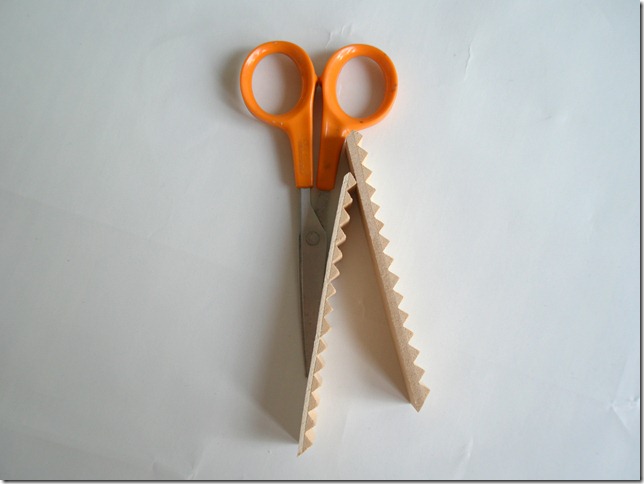 you may be able to see that the stairs on the left of the picture have a card backing, which can easily be trimmed to fit your floor level with a craft knife, whereas the ones on the right are wood all the way through.  Martin will have both at the show, either stair costs £3-25, which I consider a very well priced solution to a long standing (on the landing) problem.  Martin is such an accomplished modeller; he works in 1/12th, 1/16th, 1/24thand 1/48th and on a good close-up photograph I’m convinced you couldn’t tell which scale was which, he’s a miniaturist’s miniaturist.

As you read this, all over the world the craftsman exhibitors at Miniatura International are very busy.  Carol Smith emailed at the end of February to say she had spent three days making cheese, three days making ham in muslin, two days making salami, a day making lemons and two days making open flat mushrooms.  Was she planning to go in for Masterchef?  No, she was making all the produce for her delicatessen. 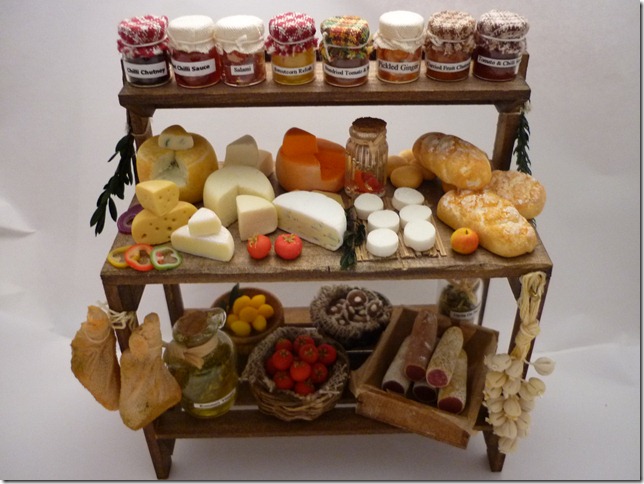 Carol reports that her kitchen and middle room are like a tip with no room on her worktop, a situation which I feel confident is being replicated in full size homes all over the place as artisan miniaturists struggle to come to terms with the awful (for them) and wonderful (for you) realisation that it’s less than two weeks to the world’s favourite miniature show.

Full details, museum websites, news of more competitions throughout the week at www.Miniatura.co.uk

JaneLaverick.com –it’s the Miniatura Madness that keeps me sane!

This entry was posted in Miniatura and tagged museums, silk thread to win, spring MIniatura. Bookmark the permalink.