A writer’s house, to be conducive to writing, would, you hope, be calm and ordered.

So it was, until my grown up son and heir to all my debts came back to stay for a while, bringing with him two cats.  I am of the firm opinion that in the case of animals living with humans, the humans should always outnumber the animals at least three to one.  Four if the animals have claws.

For the first three weeks while the cats were kept indoors, life was a turmoil but a contained turmoil.  I did produce a lead which my son placed on one reluctant cat who then took him for a flee and sit down suddenly among my newly arising spring bulbs.  Astonished at the agility of the S&H whose knowledge of my fondness for my plants was at odds with his desire not to let go of his cat, I omitted to have my camera in hand and merely laughed hysterically.

The laugh was on us once the cats started going out through their expensively installed cat door.  It took a while for them to get the hang of this and they would still prefer it if you opened a door for them so they could sit there and think about whether they would like to go out today or not. 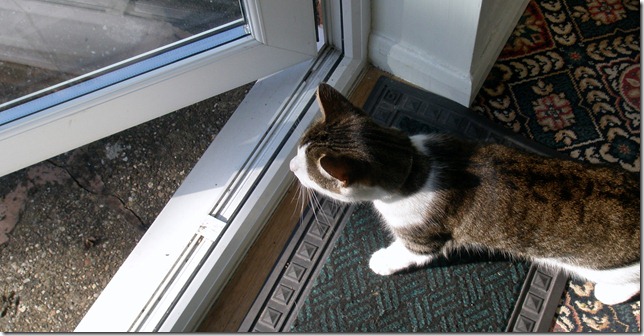 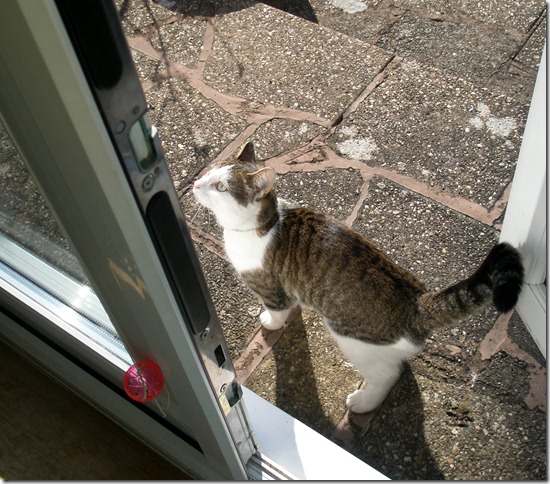 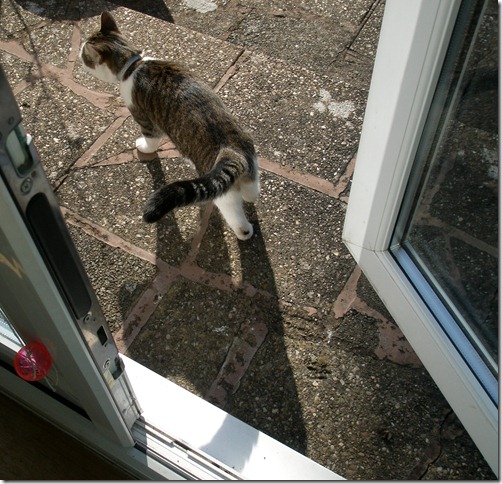 do what she did on this occasion which was to stalk off, belt back in through the cat door, rush into the lounge and sit mewing sadly by the door, waiting for some gullible human to open the newly shut door for her.

However she has mastered the cat door sufficiently to drag anything she likes back through it.  She has brought several small twigs.  Yesterday I found a wasp, halved, on the mat.  Apparently she catches them in mid air with a leap but is not supposed to as she is allergic to the stings.  She got all the way into the hall with the butterfly she was torturing.  I rescued it, as my son rescued the mouse her son brought in.

So, alerted to the various spoils that just one week of a cat door and freedom had enabled, last night when I saw the little fur shape running through the hall with something in her mouth and on up the stairs, I was out of my chair and screaming for my son who was at the head of the stairs to cut her off in no time flat. Heart pounding, I popped my head round the stairs to ask my son what poor little creature had been snatched untimely from its nest to be the plaything of an evil fur genius.

He rescued the mouthful and had a look.

And so it was.  She has done this several times apparently, because she likes cake sometimes and so does he.

I’m not that fussed but if we can send her out for chocolate bars……..

This entry was posted in The parrot has landed. and tagged cake, cats. Bookmark the permalink.