It’s getting to be a habit.  Through the glass door I glimpse the little cat dashing upstairs, squeaking, her jaws clamped firmly round something unsuitable.  I scream for the S&H* who is either getting up eventually, not getting up yet or programming (or all three) and he intercepts her to remove the contraband.

Yesterday it was a sausage.

And he said: You know that’s clever.  Where would you go to get a sausage at this time of day, with no money?

Whereupon we launched into a fantasy of survival tactics, a television programme that would pit the best TV survivalist against the S&H* and his cat.

The television survivalist you can easily imagine, they are a breed spread fairly well world wide, who will go and rub sticks together any where else in the world at the drop of a twelve week programme budget heftily supported by survival-ish Day Glo training shoes, or survivalish oven baked potato snacks or survivalish mobile phone apps or some such indispensible money generator.

The cat you can see here on the open plan stairs, installed to simulate carpeted tree branches for the sole benefit of cats and to provide easy access to bedrooms into which they are not allowed. 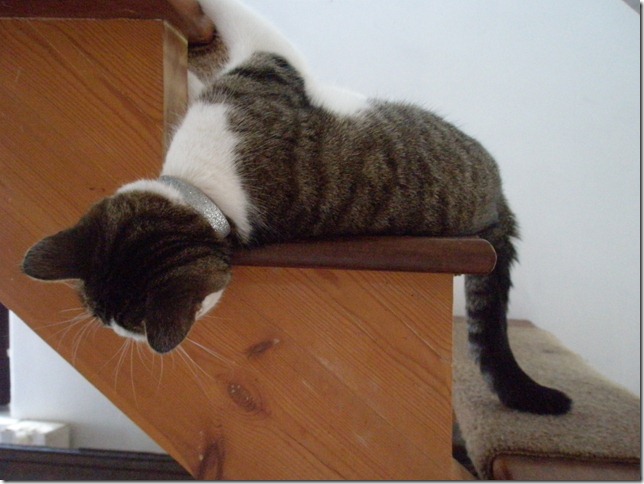 The programme opens in some slight clearing in the dense, impenetrable, leafy and, above all things, wet rainforest.

The TV survival expert, having assessed the terrain, chooses a lightening struck tree and, perspiring, fells the lightening cloven leaning half with the machete stuck down his sock.  The cat (see above) runs up the other half of the tree and watches with interest.  The S&H unfolds a camp chair and a laptop.

The survival expert rips off a bit of trunk and begins to fashion a spade from the wood utilising his penknife. 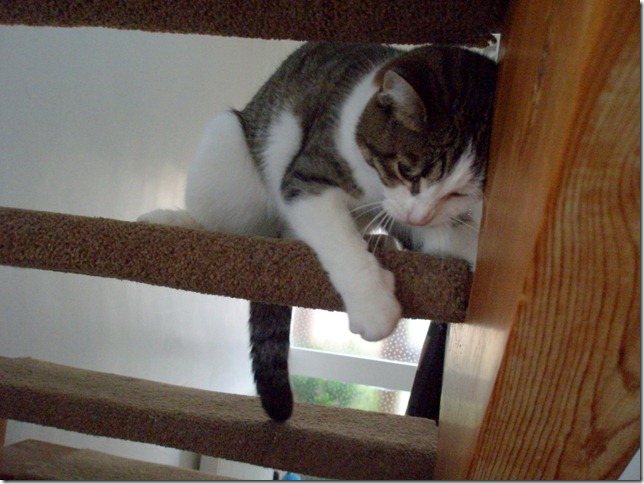 plays with a twig.

The survival expert listens to the ground in various locations.

The S&H* consults a guide to a programming language he hasn’t learned yet, which will encrypt the invention he’s just thought of.

The TV survival expert, having located a nest, begins to dig up an assortment of wriggling grubs which he puts in his hat suspended from a branch by a fishing line.

The cat wakes up and runs down the tree and off into the jungle.

The TV survivalist begins to whittle a lump of tree into a cooking pot and line it with the hobnails out of his boots, beaten into a flat sheet of metal.  He takes a fistful of dryish tinder from inside his vest and, rubbing two sticks together expending more energy than he can possibly get from the grubs makes a fire.  He places the grubs in the pot on top of the fire.

The cat returns with a Big Mac bacon cheeseburger, which she shares with the S&H*.

The grubs having fried until their spindly legs are all crispy, the TV survival expert looks around for a source of water to make gravy.  In a lengthy piece to camera, he explains how, this being the rainforest, there is water everywhere.  He cuts the ends of lianas and lets the milky, poisonous-looking water run out.  He pulls up roots and cuts them to show how blackly wet they are.  He takes off his vest and wrings it out into the wooden cup. 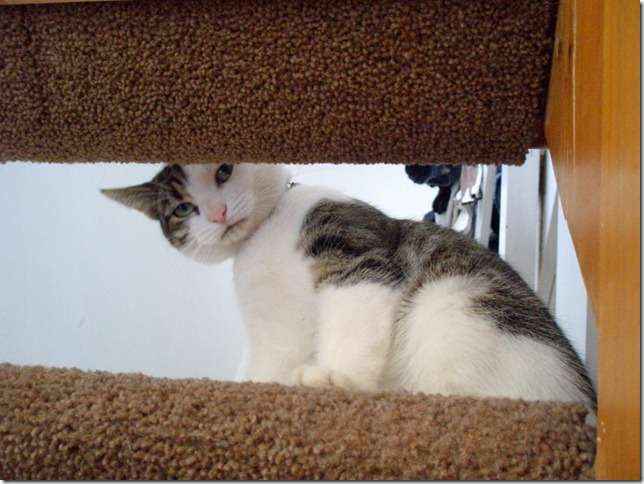 The S&H* finishes the cheeseburger and the first bit of programming, which is a cartoon and sends it to the mobile phones of the camera crew, who all play with it while the TV survivalist waits for his NATO rations water tablets to make the meagre drops of muddy water in his cup potable.

The cat returns with a bottle of Cola.

The TV survivalist crunches his grub stew thoughtfully against a background of retching noises by the camera crew.

The S&H* produces a packet of mints from his pocket and shares them round.  The TV survivalist declines and sucks a wasp instead.

The cat runs off, returning with sultana cake and hot cross buns for everyone, meanwhile, the camera crew having used their mobiles to summon a local catering van, they all have cups of tea and ice creams, and, finished for the day, decamp to the nearest five star hotel where the S&H* finally has a shower and gets dressed.

The survivalist slings his hammock between two trees in the clearing and gets into it just as the downpour gets started.

The cat crawls under a chair in the nice warm hotel 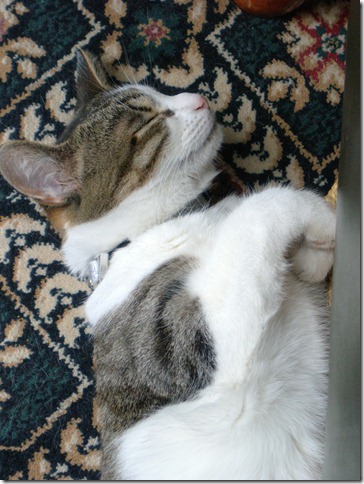 and goes to sleep.

* Son and Heir to all my debts.

This entry was posted in The parrot has landed. and tagged cats, TV survivalists. Bookmark the permalink.