Over the last two and a half years here and twenty years of writing for magazines, you may have noticed me stand up and wave a flag for family firms that put people first.

I’ve talked to people employing factories in the Far East, firms using outworkers in the UK, artisans who have turned their entire families into factories spread over a number of homes, families running shows, publishing and media firms and every type of craft business you can imagine.

Without exception those that really go the distance are those that put the people first.  Goodwill within the company and without is the one commodity you cannot buy but need, to make a long term success in business.

Two of the firms I’ve had dealings with are, in my opinion, outstanding in this regard and have earned a reputation for being best in their field by putting in the work, by not letting anything slide and by truly caring about the people who work with them and for them.  One, you know, if you’ve been reading longer than a few months, is Miniatura.  This is the best miniature art show in the world because they care about every exhibitor, every visitor, the venue, the organisation, the car parking, the publicity, the hired furniture, the brochure, the tickets, the lot.  Every single aspect attended to carefully, never losing sight of the original intention to provide a place for artists and collectors to meet in the Midlands.

The second is QVC, the shopping channel.  I’ve already told you about the questions I asked before I began shopping.  As a customer of over ten years I find their service excellent.  I once ordered a garment which went astray in the Christmas post.  Even though it was a sale item it was replaced promptly with the minimum of fuss and I still got to wear it for Christmas.  The service is good, if you’ve visited the corporate section of the website you’ll know the goods can’t be anything but good or they’d be rejected – but what is it like on the inside? 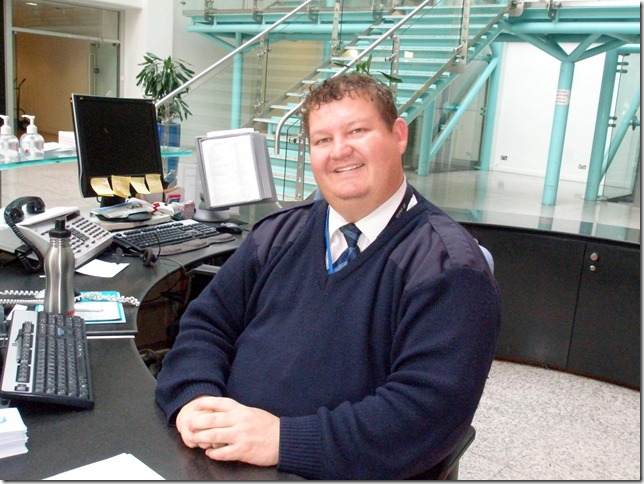 Here is Heston, manning the reception desk.  On my way in he checked me off on his list and handed me a visitor badge which I thought I had clipped to my jacket before setting off through the swing door in search of the Ladies’ room.

I threaded my way down convoluted corridors in which not one inch of space was wasted.  Anywhere there was a clear foot of floor space someone was sitting in it at a computer terminal.  Everywhere else there were trolleys full of products.  In the website corporate information there are dire warnings for any seller leaving anything at all in the building once they’ve left and you can see, in every corridor, exactly why they say so.  It wasn’t chaotic, there was order and method but there was tons and tons of stuff.  (I felt right at home.)  There would have to be when you think about it.  Twelve to fourteen products on air in every hour, with two or three of each whether they are frying pan sets, garden rakes or finger rings.

In the Ladies, trying to salvage my rain soaked hair, I discovered I’d lost my visitor badge, which I’d only just been given.  I returned to the reception area, marvelling again at all the space there wasn’t, to find Heston had rescued the badge and put it on his desk for me.

We were taken upstairs a few at a time in the lifts and set off again down slightly less populous corridors to an outer area dedicated to the event and an inner, beautifully decorated room in which the jewellery had been displayed.

Who should be meeting and greeting but two of my favourite models! 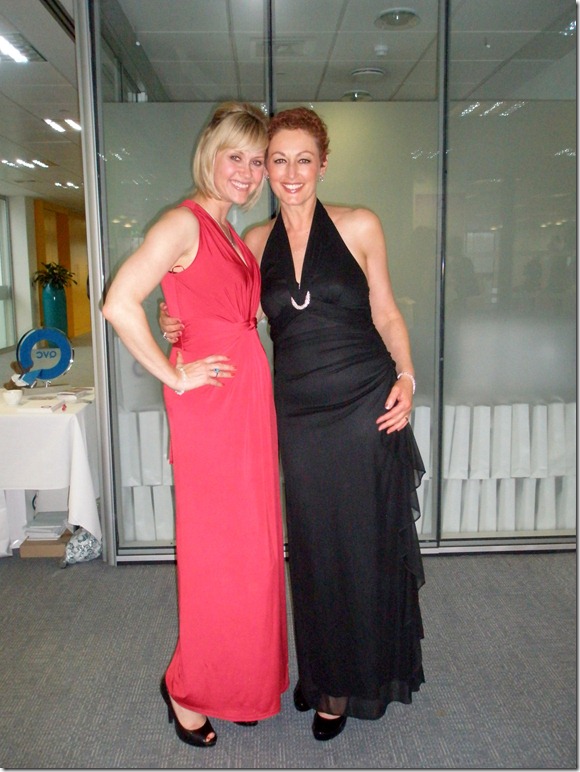 They are super tall, with vertiginously heeled shoes I couldn’t even stand up in.  They are uber slender, slimmer than you’re thinking and they radiate gorgeousness.  We’re always hearing how beauty comes from within; having met Amica and Beth I’d have to say it does.  They both do give off waves of actual beauty in the same way as I can give off waves of annoyance, or waves of bossy and short but wide.  And they did it every second we were there to everyone.

What is more, they are lovely people.

I couldn’t wait to tell Beth how much my husband loves her. He does, you know.  This is all the stranger because he hates QVC with a passion.  This may be my fault.  In my early days of QVC watching when I used to tune in as he left for the pub, I was conspicuously clutching our credit card.  I didn’t necessarily plan to buy anything,  I just wanted him to come home early.  With my previous teacher training I should have realised I was eliciting in him a conditioned response; as QVC appeared, his fear took flight. (Like Pavlov’s dogs but with wings.)

Some years into my studious watching, Beth started modelling for the channel; my husband brightened up considerably.  He began to make remarks: That Beth is very pretty, isn’t she?  I’m not keen on QVC but I do like Beth.  I’m sure if Beth met me she would like me.  Oh look, there’s my friend Beth, in a Kim and Co outfit, I hate knowing the brands but I do like Beth.  Etcetera.

When I received the invitation, he said, grudgingly: Well I suppose I could come with you, it’s only an hour and a half, I could stand it for that length of time.

Not, I replied, on your nelly.  No chance.

Because there is no way you can live a dream if someone beside you can’t wait to wake up.

So when I waddled through the doors and saw Beth, willowingly exuding loveliness, I couldn’t stop laughing.  Beth, to her immense credit, offered to phone him and speak to him but I couldn’t put her through it.  Amica very kindly took a photograph of me and Beth, sideways, because Beth had to fold herself up to get anywhere in range.  I may give it to my husband for his birthday tomorrow and he may cut me off it if he wishes.

I asked Amica how she was. As you may be aware, if you are a regular QVC viewer, Breast Cancer Care, the charity which QVC supports, came home to roost in a terrible way last year when presenter Alison Keenan and model Amica were each diagnosed with this awful disease.  The day before my visit Alison had surgery for the second time, which with a bit of luck will sort things out.  Amica, I was sad to learn, is having further difficulties.  Please put Amica on your prayer list.

Amica is as beautiful in person as she is on screen.  It was some years ago, when she was modelling a range of cosmetics and leant forwards to put eyeliner on, that I realised she has the same face shape and construction as Nefertiti, reputedly the most beautiful woman in the ancient world.  Twenty years of sculpting dolls has left me staring at faces and bone structure more than most; I’ve become good at spotting facial similarities.  Find a picture of the famous sculpture of Nefertiti in the tall black crown, next time Amica is on QVC have a look and see what you think.  The face shapes especially around the cheek bones, the eyes and the zygotic arch are identical.  I’m not the only fan, did you know there are mannequins in shop windows everywhere modelled on Amica?  No, neither did I until Amica told me, if you put ‘mannequin of Amica Pavey’ into a search engine, you’ll find her.  I cast a doll maker’s eye over them and they’re jolly good.  Not as good as the real thing, though.

I asked Amica how QVC had been through her illness so far.  She said they’d been very good and asked which other firm, in London, would continue to employ someone with cancer?  Absolutely right, though, to be fair, if you had Amica Pavey working for you and you let her go, you’d be crackers.

Other visitors were milling round the refreshments  but I whizzed straight in to see the jewellery.  Julia gave a short talk and introduced two of the jewellery suppliers who were present. 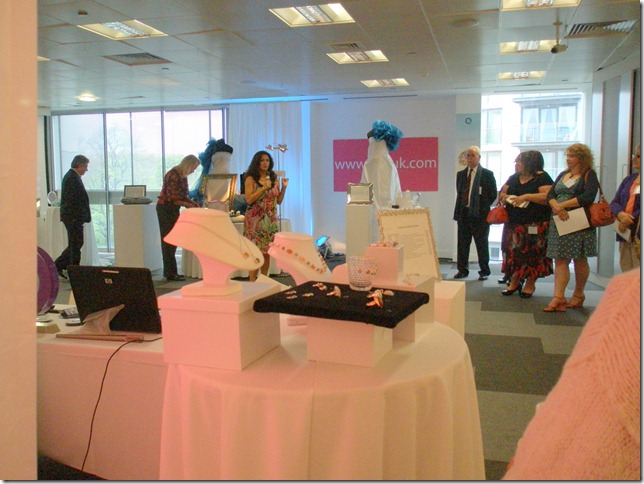 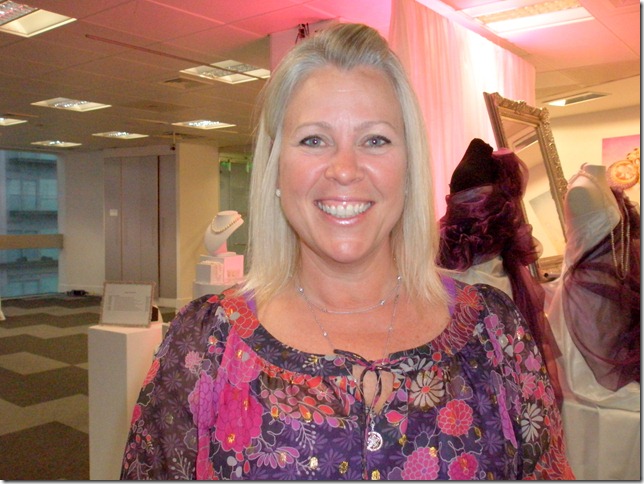 Though when I trotted up Laurie was presiding over the very impressive tanzanite display, with a great deal of knowledge.  I’ll tell you more about the jewellery tomorrow.  There is going to be something for everyone in the day.

Meanwhile Laurie took a picture of me, short with a silly face and her tall and glamorous.

QVC people who are on air allow for the horrible fact that television does appear to put at least half a stone on everyone.  These are the beautiful people folks.

Back in the foyer waiting for the taxi which Heston had kindly summoned for me, I saw presenter Dale Franklin on the hoof.  Presenters do talk about having to run from one studio to another between shows.  They are not joking. Dale entered at a lick, stage right, practically slid down the bannisters, made a sharp left and hared off down a corridor.  Dale complains on air about his large fingers but he’s not doing himself a favour, he is actually quite slim and considerably better looking than he is on screen.

In the foyer I talked to one of the jewellery suppliers.  His name is Larry Pareg.  I’ll tell you more about the utter rarity Larry has sourced for QVC tomorrow but I did ask him what QVC were like to work with and he had many good words to say about them.

As did everyone I talked to.

It was lovely to know that my faith in QVC for the last ten years or so has not been misplaced.  Everyone I met seemed happy to work there.

It was a great hour and a half, with lovely people but that isn’t why I was there.  I was there for the jewellery.

And that’s what I’ll tell you about tomorrow.

This entry was posted in About artists. and tagged QVC personalities. Bookmark the permalink.