Gem day on QVC. Report 3 from the preview.

The jewellery is marvellous.

To see the entire day, 17 hours of jewellery, set out in one room was absolutely fantastic.  The effort to source everything and get it made and ready in sufficient quantities to bring to air, remembering that popular items can sell out in minutes and that there are potentially twenty two million viewers after the same item, is just mind boggling.

Julia warned the visitors at the preview that some of the items might not be on the website until nearer to Tuesday, and she was right.  With everything to choose from, and I would have to say there was everything to choose from, I didn’t look at a single item and think it undesirable, I wanted one particular thing.  It was not there when I looked at midnight when I got home.  It was not there on Friday, or Friday evening, or three times on Saturday when I looked.  Eventually on Sunday I rang the ever helpful customer services and it hadn’t appeared on their system either, which means that it wasn’t yet in the warehouse.  A couple of hours ago it appeared on the website and after an hour of agonies (because it costs more money then I’ve ever spent on one piece of jewellery in my life before) I ordered it.  What is it? It’s a work of art.  A genuine work of art masquerading as a piece of jewellery.  More later.

Meanwhile, in retrospect what struck me most about the assembled treasure, is how focussed the buyers and planners have been.  They do understand collectors very well and the collecting journey.  Rather than just ‘having a lot of jewellery’  which they could have done and, I’m sure, found some bargains and some rarities, the pieces on offer are in themed hours, frequently featuring specific gemstones.  This is a good idea, because it allows every collector, whether you are just at the dabbling, toe in the water stage or, at the other end, looking for the missing piece, to find something.

For example there was a wonderful collection of the prettiest moonstones. 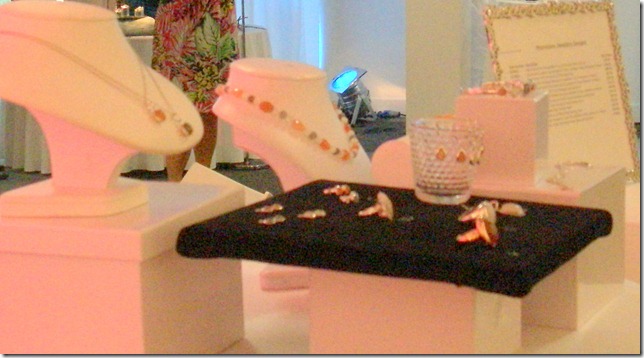 I was going to write that prices start at £20 but I’ve just been to check, there’s been a price reduction of 50p on the earrings in question, which they did not have to do as they were already good value and in a choice of colours.

The pearls are huge.  I don’t know whose arm QVC are twisting but their prices for premium quality Tahitian pearls have dropped considerably since these first made an appearance on our screens.  When I was in Australia, a big market for pearls because of its nearness to Japan, I bought one half drilled Tahitian pearl, no mounting and thought at £45 I’d done rather well.  Remember that when you see the mounted matched pairs in earrings set in 18ct. gold.  There is an endless necklace, some super quality necklaces and bracelets and some wonderful pearl/gem combinations.  Very classy ‘grown up’ jewellery.

Until I saw the item I purchased, it had been my intention, finally, to own some Nepalese Kyanite.  The only reason I do not have Kyanite in my collection yet is the variable quality of this rare gemstone.  Kyanite has the same chemical composition as Sillimanite and Andalusite, the difference is that Kyanite underwent massive pressure during its formation, which is why it is found in Nepal where the bashing together of the tectonic plates has been so violent as to form the highest mountains on the planet.  Kyanite can have striations in it and numerous inclusions and, needless to say, coming from inhospitable regions that are difficult to reach, is not in great supply.  The Kyanite at the preview was out of this world.  The stones were absolutely clear and the most beautiful deep blue.  If you climbed Mount Everest and stared into space, that’s the blue you would see.  I particularly coveted a five stone emerald cut ring in yellow gold which I will go back for when my finances have recovered.  I wanted, but didn’t dare try on, the most beautiful line bracelet with stone after stone of perfectly matched deepest inky blue gems.  I thought I’d never be able to afford it but blow me if they haven’t gone and put it on at a one time only price.  If I were not already committed to my precious (it’s a ring) I’d have been buying the bracelet.

The TSV is a new/old find of incredible Topaz.  This has lain in a vault undiscovered for some years.  The ring which is the TSV would not look out of place in an 18th century portrait.  There is quite a range of Ostro Topaz jewellery.  The colour with the naked eye is startling, the nearest thing to it being perhaps neon Apatite.  I have not the slightest doubt that someone will mention Paraiba Tourmaline in regard to the colour and, having seen it, I’d agree.

As I was galloping round the tables my attention was arrested by one item on a display of Rhodonite.  Rhodonite is a very pretty pink opaque gemstone like the sort of marble fairies would have for their palace floors and walls.  The item that stopped me in my tracks, you can enter into the QVC search engine and see for yourself.  It’s 600600.  I stopped because the gems in question are translucent.  All my rocks and minerals books tell me that Rhodonite is opaque and yet here were three massive cabochons of fuchsia pink see-through gems that fairies could use for palace windows if they wanted to.  And they would want to.  There is a little video of the last on-air appearance of the gem which does not do it justice at all.  The still photo is quite good but really this is one you need to get home and look up at beside a window.  This is a rarity.  This is such a rarity that after the show the only known place to get it will be in the jewellery boxes of the QVC customers.  If you love pink (and this is PIIIINK) and you go somewhere where you can show off with a rarity (such as a cruise where they sell jewellery – trust me, they won’t have this) or you are just assembling the most heirloomy collection you can, this is the one for you.  It’s utterly glorious.

Among the other delights there was some absolutely super Morganite.  There are blue Morganite rings (yes I thought it was just pink too) and the most fabulous bracelet. 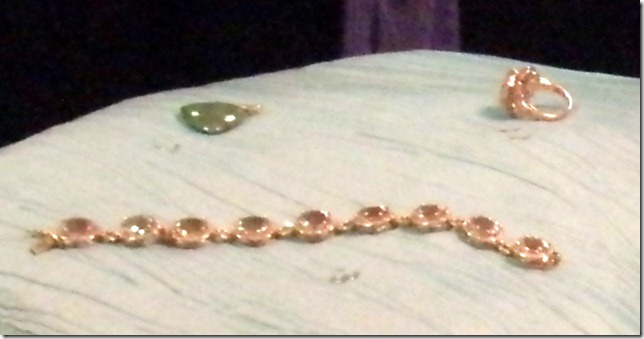 In the background is a huge Russian jade triangle pendant at a modest price for the size.

Here at last is my precious,

actually, I’m not going to show you.  If I do they might sell out.  Whoever designed this is an artist if ever I met one and they deserve to have this item aired, shown and thoroughly appreciated.  I will ring the studio and say why I bought it in the grand finale of the day which starts at ten o clock.  It’s a work of art and I own one.

It’s now four days since I went to the preview and I’m still excited.  From midnight tonight I will be glued to my TV.  I’m sorry my pictures of the gemstones have been such rubbish but in an hour and a half you can see them for yourself.

You can see what got me so excited online at www.qvcuk.com  select ‘Watch QVC live’ to join in, from midnight tonight GMT.  You can order online too, though if you are watching far away from the UK you might want to check with the call centre that they can post to you, as I guarantee there’ll be something you just have to own.

This entry was posted in About artists. and tagged bracelets, earrings, gems, gemset jewellery, jewels, QVC, rings. Bookmark the permalink.