Archaeology down the drain.

Postings may be infrequent at present due to the amount of time spent sitting indoors watching the drought pouring down, causing the absolute need between the downpours to get out there and do something.

I was never very outdoorsy as a child; I mostly had my nose in a book though I did spend time in a pedal car, on a scooter or on roller skates.  The older I get the more I feel the need to get out in the fresh air in the summer and do something.  I do like gardening but prefer building.  Nothing is quite as satisfying as concrete.  The ancient Romans called it Opus Signinum and used it to great effect everywhere, it’s a very macho thing, concrete, which once done, stays put.

Excavating the holes for the three drains utilised the supposedly enormous muscles that the other half goes to the gym three times a week to build.  He opined that the only way through the crazy paving was with a lump hammer and bolster.  I thought a drill would be a good first attempt to break through and was subject to great scorn until he actually tried to hammer and chisel the virgin concrete, after which a drill was produced, not because I’d said so but because he’d suddenly thought of it in one of those amazing coincidences that happens all the time in parallel universes.

Drilled around, each small square of paving proved quite as hard to shift as anyone would wish, necessitating an lengthy explanation as to why five minutes hitting concrete with a hammer was equal to days and days worth of weight lifting in the gym.  I suspect two kinds of muscles are involved; the impressive kind and the useful kind.

Anyway, with a great deal of fuss and bother the concrete was breeched and in twenty minutes with a trowel, I’d excavated the necessary hole to house the drain.  In the course of which I encountered a bit of archaeology.

When we put in the path on the other side of the house we continually found artefacts belonging to the Victorian gardener’s hut which stood here.  All the bottom of the hill was market garden for the Percy estate.  The Victorian gardeners left a legacy of fine tilth and assorted domestic rubbish. 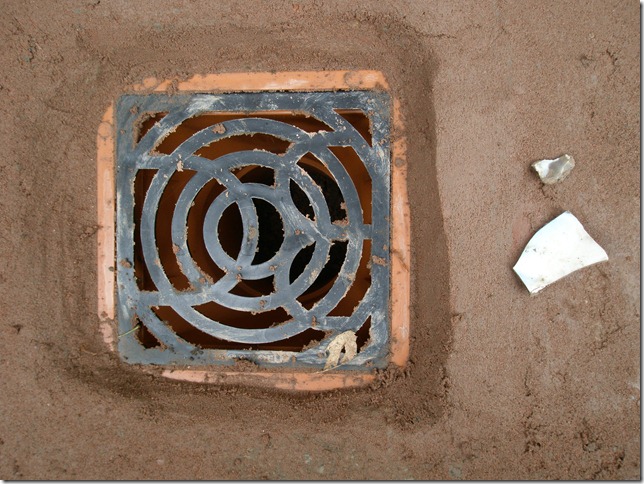 Here you can see a piece of broken saucer and a knapped flint that I found and the hole, down the drain, in which I found them.

At the top of the hill was the largest Neolithic flint factory in this area.  I constantly find flakes of flint and sometimes pieces large enough to qualify as hand axes.

This time it was just a small flake but still sharp. 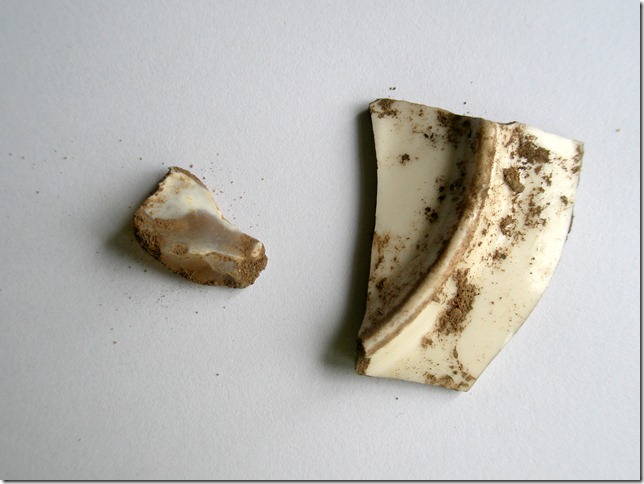 Here’s the back of the saucer and the flint flake. 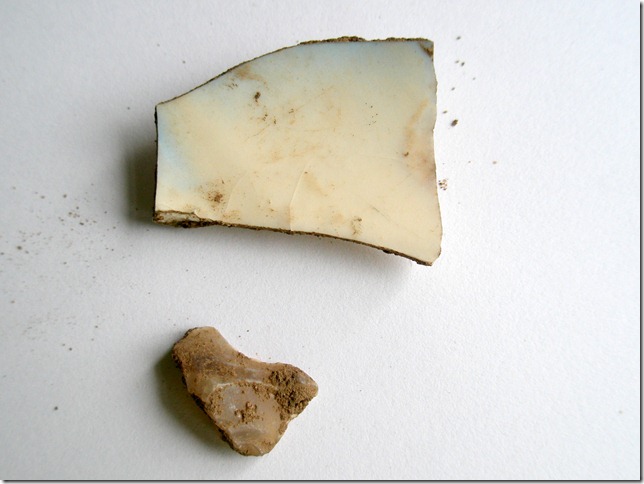 And the front.  How amazing to think that something that someone made has lasted a thousand years here.  I wonder how long the drain will last? 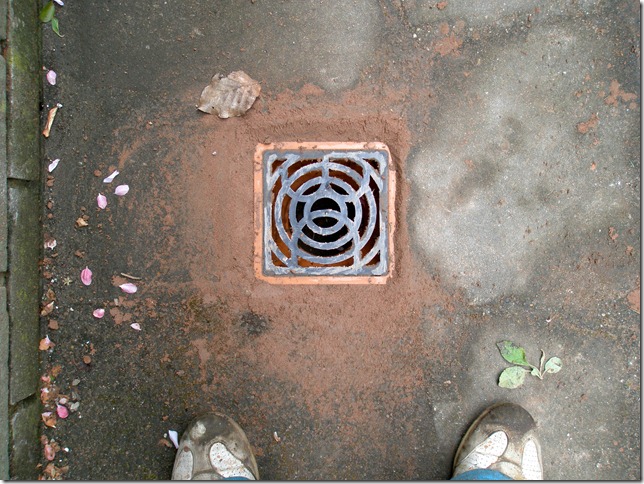 Here’s another beautiful drain and the feet of the woman who concreted it in, not perfectly straight according to the local critic, who was indoors rubbing his shoulders at the time.

See?  Not just some old codger snoring in an armchair, heritage.

This entry was posted in Nostalgia and tagged drains, flints. Bookmark the permalink.