Something ghastly, something cheerful.

Sometimes in life, if it’s not one thing, it’s another.  A platitude that describes my week perfectly, let’s do the ghastly bit first.

I received a phone call from the Community Mental Health nurse for the area that encompasses my mother.  Although it is three weeks since the incident where my mother hit me with a stick, chucked the care worker out physically and generally kicked off, news of this had filtered, via the GP through the NHS until it fetched up at the nurse’s door.  She therefore rang me, mostly it seemed to me, to suggest it would be better for all concerned if my mother were just admitted to a care home where she could be adequately contained, for the safety of all concerned, etcetera and so forth.

I phoned the care agency and wailed at them and, after some reassurance from assorted parties, the manageress got on the phone and arranged to meet me at my mother’s house on the day the nurse was going to turn up with a list of questions, to give all moral assistance and to let the mental health nurse see how competent the care agency was.  Basically to save my mother from being sectioned all over again.

It is bad enough having to be a carer, it’s not very good to be doing it for someone who spent their lives making yours a misery, but it is the utter pits to be doing it whilst fighting off single handed, someone, who having seen my mother twice to my knowledge, then decides she should be locked up.  What on earth is the point of expenditure of time, effort and vast quantities of money if my mother ends up chucking herself round a padded cell? At 90!

Fortunately I was not fighting off the NHS single handed, really, the manageress of the agency had my back, or, more to the point, my mother’s.

Also, thank goodness, thank goodness I had had that talk with my mother.  When the nurse had finished the questions she was asking my mother, my mother volunteered spontaneously that she liked her carers, they were nice people, and she said it twice.

Subsequently, in the kitchen, the nurse and the agency lady seemed to be on the same page and had helpful dialogue.

The whole thing was left up in the air.

When my mother has complained about everything this week, as is her wont, I have so wanted to tell her to enjoy each and every moment in her own home.  I haven’t of course.  She has no need to worry until she has, and even then if we get to that, I’ll try to see that it all proceeds nowhere and the Status Quo is preserved and that we are definitely not going Down Down, deeper ‘n’ down.

What a system.  First you have to work to get good care, costing an arm and a leg, in place and then you have to fight to keep it there, against a bigger older system that would like to replace it with something not as good.

I still don’t know the outcome.

So when, later in the week, I got the opportunity to join in a life drawing class run by an art shop near me, I was absolutely up for a couple of hours off the worries and on the art.

There was no tuition, which is good because I think I’d be very tuition resistant at present.  There were about twenty artists, all doing it large on sugar paper with pastels, and me doing it little on Stampbord with ink. 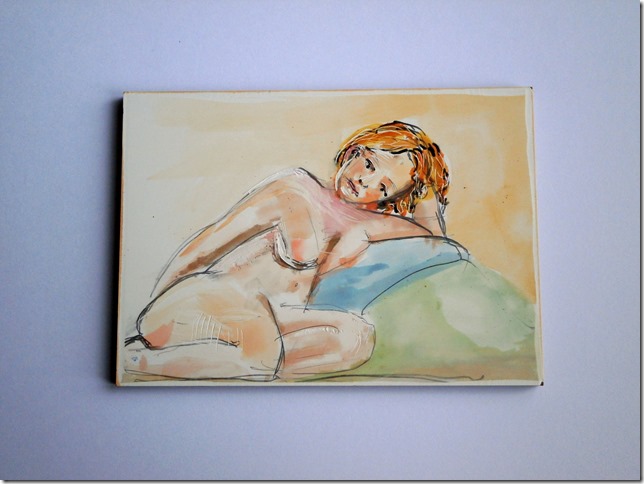 Loved every moment of an antidote to a ghastly week, planning to go back for more art, hoping not to have more threats from the NHS.

Where would we be without art?

This entry was posted in About artists., Dementia diaries. and tagged being sectioned, life drawing. Bookmark the permalink.