I am busy rubbing down the newest six 24th scale dolls.  I am keeping busy, as so often in the last few years.  If the body of someone close to you is affected by disease, once you are sure you have done all you can to help the person, then unless you are going to sit around waiting for them to die or get better and your practical help is not required, then your best bet is to mind your own business and get on with your own concerns.  The OH came out of his liver scan white as a sheet, the situation is grave but still recoverable and with no apparent cancer, which is great.  Having had cancer I wouldn’t wish it on anyone else, it’s terrifying.

So my job now is to get on with my job and, as always with brand new dolls, I am finding out what difficulties I have lumbered myself with.  Even after twenty five years of designing dolls I am still producing things that are tricky to rub down.  I am, however, doing it so far ahead of the show that I can afford the time to go slowly and to stop and rest when I am tired and, so far, this is having a dramatic effect on wastage rates.  I am very glad that I spent so many years interviewing artists working in miniature because it has given me an insight into wastage rates.  Unless a physical item is made by a machine, which can be programmed to repeat the same actions, exactly, hundreds or thousands of times, there will always be wastage.  The more complex and multi stage the  process required to create the item, the higher the wastage rate even if the craftsman is experienced.  Every experienced craftsman allows for wastage rates.  I recall Phil Grenyer, of Glasscraft telling me that: You just don’t want to be walking on too much broken glass.  I also own one of Terry Curran’s vases that had come out of the kiln so perfectly that he didn’t want to sell it.  These people are both master craftsmen who have made thousands of the items they sell and are internationally known and respected for their work.  And I would note, neither of them when they had finished their multi-part task had to segue into a different discipline and put clothes and a wig on it.

Nevertheless it is a pleasure to use skills you have honed over many years of practice.  I have designed a ten part fairy man who will be considerably less than three inches tall and has correspondingly slim limbs.  Upper arms as always are a difficulty.  They are thinner than a thin stick of charcoal and more fragile and they have to have a hole through the middle for two strands of elastic going down to the stringing hook in the hand and back up again.  If these items are left in the mould too long they will crumble when removed but can sometimes be reshaped with wet clay round a wire core.  I always kid myself when pouring that  I won’t be able to tell which ones I’ve reshaped but the fiction only lasts until I’m rubbing down, during which the thought that rises unbidden, with frequency, is : which fool poured this bit of rubbish?  I’ve lost three bodies so far, I should have poured them a millimetre thicker.  If I get one fairy man through all the processes, I’ll show you.

Shrunken Mr Darcy was difficult too.  The original came out so well 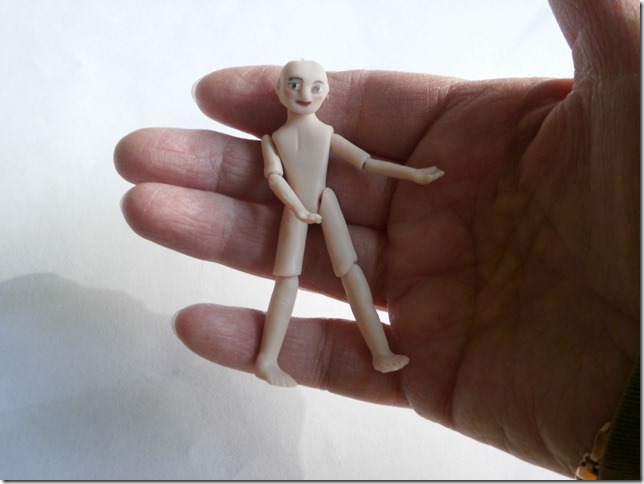 that I thought I would see what happened if I took moulds from the finished body parts and gave him a new head.  You can see how thin his upper arms are.  When I took the mould from them, the liquid clay is poured into a hole exactly the size of the arms in the picture.  Once it has dried out enough to be demoulded it has shrunk by about 12%.  Once dry enough, three days later, to be rubbed down it will be about 18% smaller than the original, though of course, in the rubbing down, the hole in the middle will still be large enough for two strands of elastic, so the porcelain ‘walls’ round the central hole are comparatively thinner.

There is no doubt about it, learning is taking place.  It took me a while to find this picture, that I was so pleased with when I took it.  Now I can make the original sized Darcy much better than the one in the photo.  How I fare with Darcy mark two remains to be seen.

When I’ve finished the fairy man I’ll be starting on a short fat witch with curly toed boots.  I’ve had a few requests for witches recently.  It usually means that someone has designed a 24th scale dolls’ house that looks like a witches cottage to everyone.  I have also done a giant wizard for requests who I am only going to do a few of before I shrink him to a size that  is similar to the witch.

When I’ve finished these I have several items in mind that I want to try in this scale and then I must get on with 48th scale because stocks are running rather low. If you are a mail order collector I’ll be pouring for you soon.

It is a pleasure to be a craftsman, to have skills you yourself have acquired.   It is lovely to be able to be happy creating things that make other people happy too.  Good use of time spent awake, I think.

19 weeks to Miniatura (crikey, is that all?)

This entry was posted in Dolls and tagged 24th scale porcelain dolls. Bookmark the permalink.