There will be no Knickerbocker Glory this Friday, not even a lick of the spoon.  It’s ten at night on Thursday and I’ve just stopped rubbing down porcelain, which I’ve been doing all day.  I’m beyond knackered and need to get to bed so can get up, do some glazing and prep and load the kiln before I turn it on.  I want to do that just after the other half has gone to golf so it will go off before he gets back.  Now the reason for this is that the kiln lives in the garage, along with several dolls houses, the barbecue, the tools, the porcelain slip, the big moulds, the lawnmower, the ladder, wood mouldings, plaster of Paris, spare concrete, four indispensible yellow trugs, a dead garden recliner, a half-made games machine, the gardening tools, seed trays and compost, buckets full of non matching screws and nails, Arthur Mee’s Children’s Encyclopaedia and, most crucially, the golf clubs.  The car?  In the garage?  Don’t be daft!

So the thing is, if the up and over garage door whooshes up for golfing purposes while the kiln is on, you get a blast of icy air and possibly dust up the peepholes.  And I’m not having that.  In the rest of the house I am a slut’s slut.  If there is dust, I take my contact lenses out, which makes it go right away.  A miniaturist once told me that dirty windows were an excellent crime prevention measure because they stopped burglars seeing inside and I thought it was such a good idea I have stuck to it ever since (and the windows, obviously).  But dust near the kiln that might embed itself in the dolls as black specks?  Perish the thought!  The floor under the kiln is so clean you could eat your dinner off that bit of concrete, not that I’d let you. You can march straight into the hall, on what I laughingly call the carpet, in your wellies if you like, all I’ll say is ‘hello’ but breathe dustily near the kiln and I will go berserk.

So time is tight and something has to go.  As it takes about three hours to type and proof read  a pre-written piece and at least a day for an original, I’m not even going to do the thing where I think of words for writing half way through my shower and dash downstairs to the computer in my underwear (which is a strange place to keep a computer but is obviously normal, other wise it would be called a jeanstop and not a laptop.) 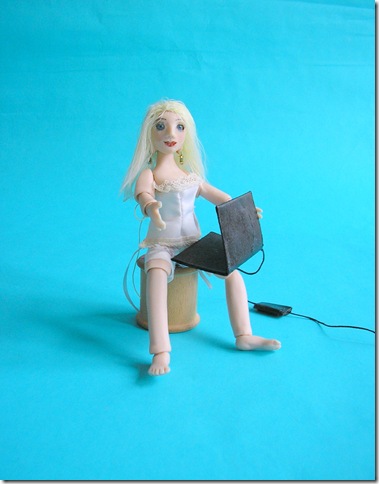 It’s nice to be normal, I hope you agree, if you’ll excuse me I have a garage floor to vacuum and polish before bed.

This entry was posted in Dolls and tagged humour, kiln, porcelain. Bookmark the permalink.