If you are a reader who has worked out that I usually post on a Sunday, (clever you, because I never said so) please scroll down a couple of posts as I am photographing dolls as and when I get another batch done.  The reason I’m doing this is to save you squinting at the show.  I will, as always, have a magnifying glass on the stand.

I am dressing Tudor men, as you can see.  For anyone unsure of the size I have included a cotton reel.  The men are all under an inch and a half tall, there are workers and average blokes but, carried away by the story, I have gone to town on the falconers. 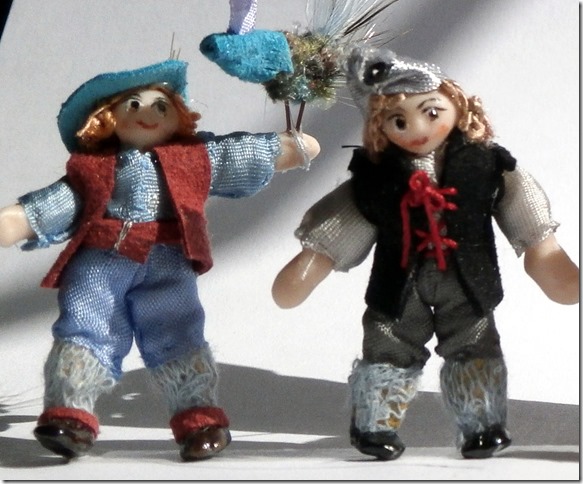 This chap seems happy in his work, but the other falconer is struggling.  Everyone around him looks a bit alarmed.  Is the bird going bananas under the hood?  Is it going to take off with him attached? 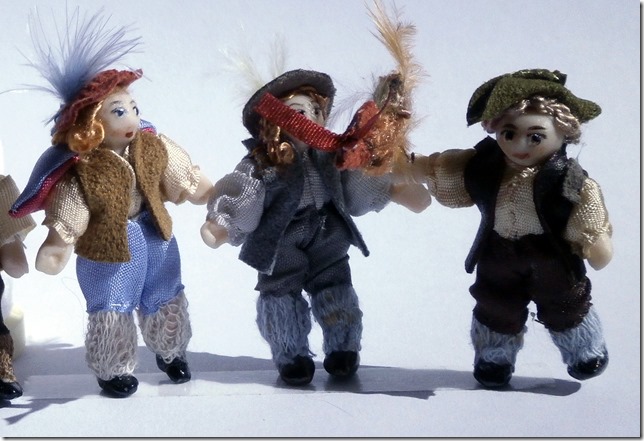 I think I may have inadvertently made a close relative of Hodgesarrgh, Terry Pratchett’s falconer to the castle of Lancre, who was always getting pecked by his charges.  This could be the close relative with another phoenix, in which case I forgot to give him asbestos gloves.  Let’s hope he can keep the hood on until the bird calms down.

One feature of modern cameras is that they can see the tiny threads my scissors have failed to cut which are invisible to the naked eye, which I will have to try to cut, now I know where they are.  On the table beside me as I work currently, there are nine different pairs of scissors.  I search endlessly for scissors that will work in smaller scales and I spend a ludicrous amount of time sharpening them.  They will be needed today when I am dressing ladies in flouncy skirts, with work on three tiers to every skirt and the underskirt, approximately a bajillion little stitches. (This may be an overapproximation but it does feel like a lot when I’m sewing all the frills on.)

People always ask how long it takes to make a doll, which depends on the wastage rate in the rubbing down and the weather at the pouring stage but I do know that dressing each falconer took half a day.  Now if I could only teach the falcons to lay eggs……………

This entry was posted in Miniatura and tagged 48th scale dolls. Bookmark the permalink.