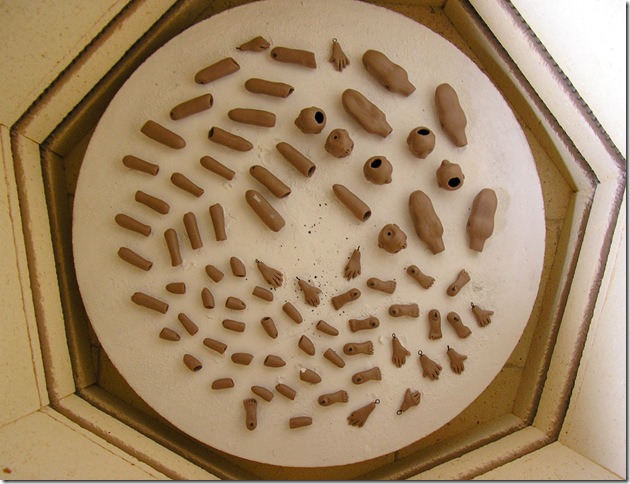 Here is a picture, an interesting picture.  Can you see what it is, yet?

One of the extreme joys of porcelain is opening the kiln on a new doll.  You just don’t know what you’re going to find.  After 17 years you might have a fairly good idea but as soon as you mess around with the basics, such as the slip, the way you make the moulds or the glazes, you’re into unexplored territory.  The interesting thing about a kiln is its uncontrollability.  You can, of course, alter the heating ramp, meaning the rate at which the temperature climbs and the way you load the kiln, how much you put in it and where; however once that lid is shut it’s on the anvil of the kiln god, who would probably be Vulcan, come to think of it.

So as you may have guessed by now, what you’re seeing is what I saw this morning when I opened my kiln on an experiment.  Kilns teach you patience.  No matter how keen you are to see how it turned out, once the kiln has shut off you have to leave it until it is cold before you open it.  This is because of a little trick Vulcan has up his toga called thermal shock.  I remember reading long ago, in what was regarded at the time as an authoritative textbook on dolls, a description of conditions in a Victorian doll factory of kilns being unpacked by child workers when the dolls were still red hot, the doll parts being thrown from hand to hand to the workbench.  This invocation of Dante’s Hell for Child Workers in a Victorian Factory was colourful but inaccurate on two counts. Absolutely nobody who had expended all the effort necessary to make a nice new piece of porcelain would chuck it around and hot porcelain straight from a kiln at 1200 degrees is firstly, unhandleable, unless you have cast iron hands and secondly subject to thermal shock; the minute the hot ceramic hit the cold air it would crack.  Dolls are particularly vulnerable in the thin areas such as the eye sockets, engineered joints and fingers.  Once cold, most forms of pottery are very strong; archaeologists regularly unearth ceramic items three thousand years of age and older all over the world, in remarkably good condition.  Very few man-made artefacts survive as well. However, to bake in the strength you do have to let the pots cool down properly, where ever you fire them. So whether you’re a Neolithic potter leaving your coil pot in the embers overnight, a Roman army lamp maker not unpacking the clamp until your test probe comes out cold, or Jane opening the kiln on a new colour of doll you just jolly well have to wait. If you can accept the gift of patience that Vulcan offers with good grace then you may well have a new cooking pot, a lucrative order from the quartermaster, or a lovely new doll in a great colour that you made by mixing with your fingers crossed.  You could alternatively have a cooking pot with a  hole baked into the side, XVC lamps with wonky handles and a streaky doll that more closely resembles a bit of crispy bacon than any known human being. And you just won’t know until the morning, and even then you have to take the bungs out and hold your hand over the hole and then, if it still feels warm go away for an hour or two and do more waiting.

For anyone paying close attention, there are black specks very clearly visible in the kiln sand.  This is not because I failed to polish the concrete floor adequately, it’s to do with the age of the kiln, which is no longer manufactured. I would go and buy into something with age-affected parts, 17 years before they stop making it and I did.  I have, however, bought a second hand kiln from Terry Curran which has been used less than mine and it will be in service just as soon as I can afford a visit from an expensive itinerant kiln engineer to give it the once over. As you can see I’m avoiding the speck problem slightly by leaving an empty bit in the middle of the bat.  Bat is the Potteries name for a kiln shelf. The Potteries being the area of Britain around Stoke on Trent which has been associated with ceramic manufacture for three hundred years or so.  The Potteries bats, alarmingly, are not flying around as they used to do.

Sadly, as some aspects of mass ceramic manufacture return to the area of the world where they started, the support services for this long term British industry are winding down in many ways, which is causing problems.  One of these is slip supply.  For forty years or more, coloured porcelain slip for doll making has been imported to Britain from the USA where a couple of family firms produced it.  Family firms do not last forever; as the supplies have dwindled for the last few years I have put energy into urging the production of  a British pouring slip.  I contacted every porcelain doll maker I could find in the country, a couple of years ago, to ask what they wanted.   If you’re one and waiting for me, could you please exercise your kiln patience? After Miniatura I’ll take up this cause again, the problem has now spread to all of Continental Europe and needs fixing before everyone gives up and the skills are lost.

Interviewing the Miniatura artisans for the last fifteen years has made me aware of how fragile traditional skills can be.  Ceramics, metalwork, glass blowing, textiles, wood carving and all the traditional skills so resplendent at Miniatura and so sparse and expensive anywhere else in full size, are hard won and totally dependant on the will of the individual to persevere until  the difficulties of training the brain, the hand and the eye to work together are overcome.  There is constant competition from easier, cheaper, less permanent and unskilled ways of making things. Impatience to make a quick buck and have more leisure time to do nothing is going to impoverish our legacy to the future. The challenge to the undervalued craftsman, once his skills are certain, are to source the supplies and store them, adapt the home or work space, get good at it, then sell the results and then when you’ve got all that sorted either some supplies stop being produced, the bottom drops out of the market or your physical abilities dwindle just as your skills hit their peak.

I seem to have all the difficulties at present.  I haven’t sold anything from the shop yet because we’ve hit a world recession and I can’t afford to advertise much, my hoarded slip is drying out, the kiln manufacturers have stopped just as my kiln is packing up, I can’t sit for longer than an hour or so because my hips seize up etcetera and so forth in a great long list.  However, I haven’t spent 17 years acquiring a skill just to chuck it all away because of a little local difficulty.  So the dolls in the kiln were made by sieving and rehydrating the dried up remains of one ancient bottle and combining it with another completely different one in proportions I had to make an experienced guess at because I had too little slip to waste in a variety of mixed, fired blobs till I got the colour  wanted.  I’m going to have to repeat the feat if the dolls sell and do it exactly.  The procedure of porcelain and the high wastage rate mean that you never end up with all the body parts you started out with, you invariably have a number and a half of dolls or a number and six spare feet but no hands. Sometimes I can borrow hands from another doll in my vast odd parts store; if by chance they fit, they do have to be exactly the same colour and a similar standard of sculpting, as I’m hopefully evolving into greater truth and simplicity all the time.  Biodiversity is a wonderful thing but not in the same doll.  I’m keen to make more dolls of different created colours and would have done it sooner except for the fact that many historically biased miniaturists have African child slave dolls in their houses.

The unspeakable fashion of ‘importing’ ‘cute’ African children to keep almost as family pets and later, servants, was part of the vast surge in human traffic that provided the cheap work force in the New World in the eighteenth century. The workers were originally British natives, often straight out of the jails and on to the ships until it became clear that plantations with African workers were doing rather better; the native British tended to die too quickly to be useful. The lucrative and fashionable spin-off of stolen African children never getting as far as America did happen in the houses of the rich all over the country for more than a century; anyone miniaturising a house of that type and era should probably have such a child in it. Miniaturists do strive to tell the story of the house; if it’s a historical house it will be as accurate as possible.  There’s no way I could contemplate my dolls living a life of slavery or even servitude. Of course slavery has happened in practically every country in the world and to every human group and unbelievably is still happening in some places.  However in the history of Dolls’ houses in  twentieth century Britain, a black child doll would be most likely to end up as a servant, so I just wouldn’t make one. I’ve never done servants at all, the only ‘domestic’ I ever produced was the white 24th scale cook, and she’s a free spirit, outwardly all plain uniform but below, lace underwear and the ability to poison the household if they don’t treat her nicely.

I am pleased to say, at last many more forward looking miniaturists here are making and filling modern houses or just having lovely collections, which gives me the chance to follow my inspiration and make a wider range of dolls. As they are porcelain they will outlast their original owners and be free to reach their maximum potential as valuable antiques having lived interesting and full doll lives. Hence the coloured slip kiln experiment.  I’m pleased and surprised by the results, the original slip was a dark hard-looking purple colour which would have been bearable on a big doll but not much good in miniature. When it all comes together into a doll after the next umptynineteen processes, I’ll show you the end result so you can see what you think.  Meanwhile, thanks to Vulcan, I’m in for a bit of grit scrubbing.  Joyfully the weather is warmer so standing in the unheated kitchen for a couple of hours wearing my fingernails off with cold wet sanding sponges is not such a chore and at the end, eventually, new dolls! 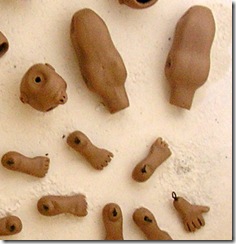 Can you see what it’s going to look like yet?  Me neither, though I’ve got a good idea.  Find some kiln patience and I’ll show you when it’s good and ready and looking really cool.

This entry was posted in Dolls and tagged Dolls, Kilns, porcelain, the Potteries. Bookmark the permalink.

One Response to Bio porcelain diversity.