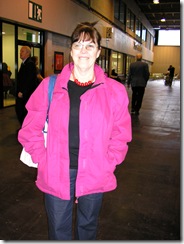 First in the queue and raring to go was Carol Leach who had set out from Leighton Buzzard at quarter past seven.  Carol has been coming to Miniatura for at least ten years, she has twenty two houses and ‘all the room boxes’.  By tonight she probably has a few more.

Leaving Carol patiently waiting, I went round the hall where the exhibitors were setting up and found all those I have featured in the past ten weeks in Midweek Miniatura.  Here they are. 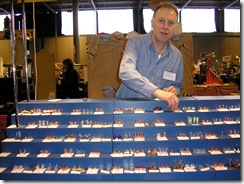 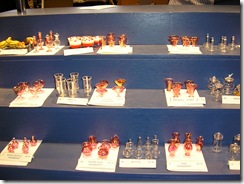 This is Phil from Glasscraft carefully placing vases. 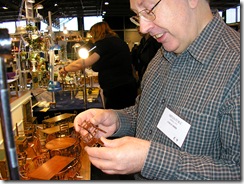 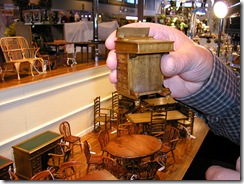 Here’s Colin with that fantastic Davenport.  Now do you see how small it is and how clever he is to make it? 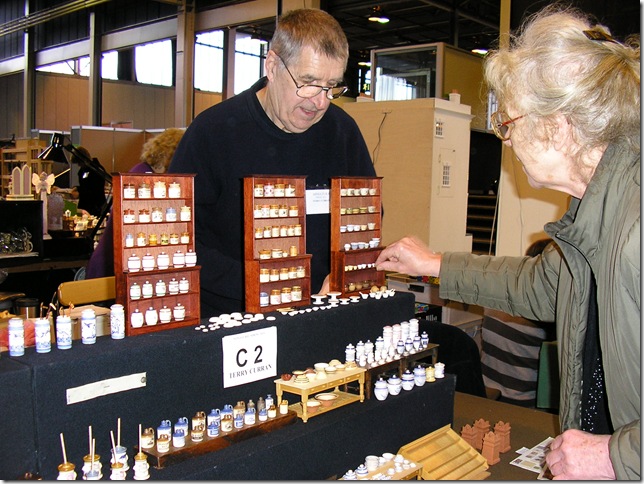 Here are Terry and Kay Curran setting up hundreds of pots, Terry, as I’m sure you remember, made the cockroach trap that mystified readers on at least three continents for a couple of weeks.

Did you guess that Malcolm Hall’s lantern clock was miniature?  Here’s the proof: as you can see, I found Malcolm just as he was lowering it onto its shelf. 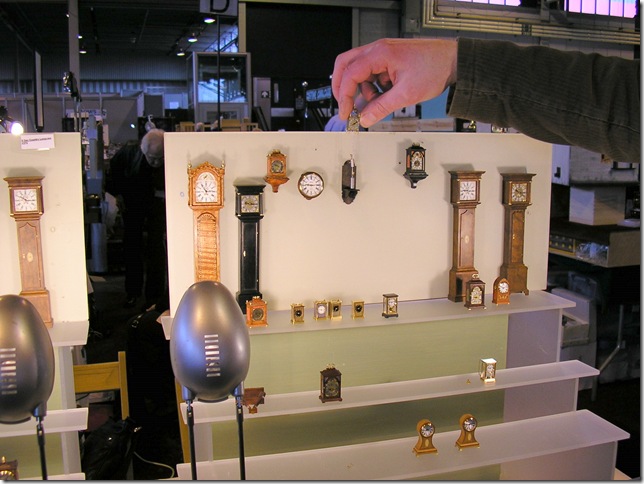 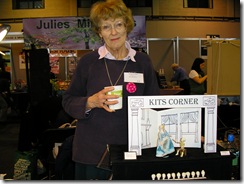 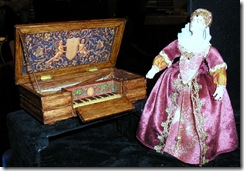 This is Jill Bennett, having a quick cuppa before the queue rushes in demanding a demo.  Next to the kits corner is an early English Virginal, made by Jill’s husband with a doll of the correct era by Jill.

The queue is growing by now and the exhibitors are setting up as fast as their fingers will fly, here’s Sindy laying out Sindikits at a great pace. 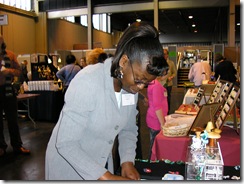 Not bad for a woman with only three hours sleep, though sleep deprivation is the normal state of exhibitors at this stage. Julie at Bella Belle dolls looks as if she is trying to catch up on her feet, which might be something to do with the tired photographer not noticing she had her eyes shut. Julie is bella either way and all the little boxed dolls look wide awake and ready to go. 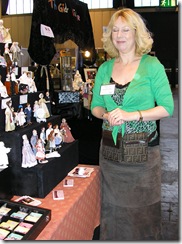 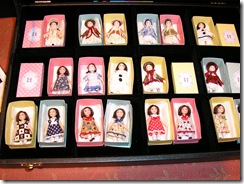 I found new exhibitors Kastle Kelm brimming with enthusiasm, wizards, Frankenstein’s laboratory, pickled babies, assorted creatures and more miniatures generally than you could imagine would fit on just one stand. 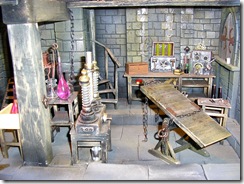 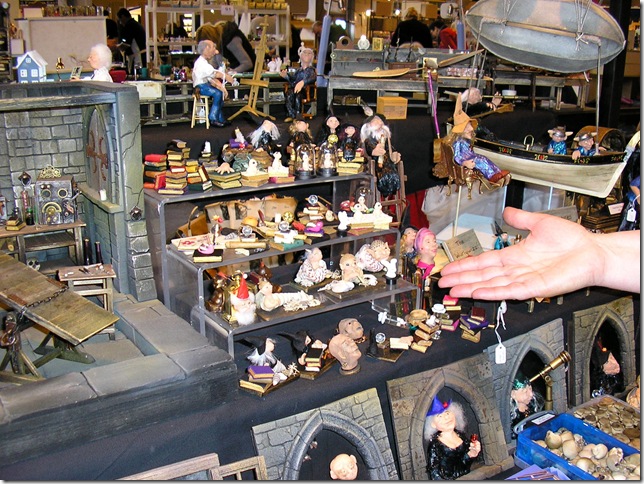 Taa daa!  All placed by the very hand that made them. 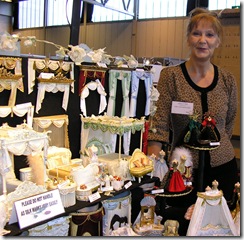 Almost opposite, Linda at Simply Silk was simply ready, which is just as well because it’s ten to and the queue is champing at the bit.  Let’s scuttle to the other side of the hall and see Judith with the small scale houses at In Some Small Way. 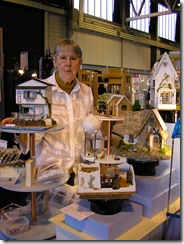 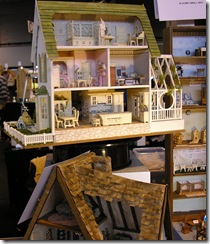 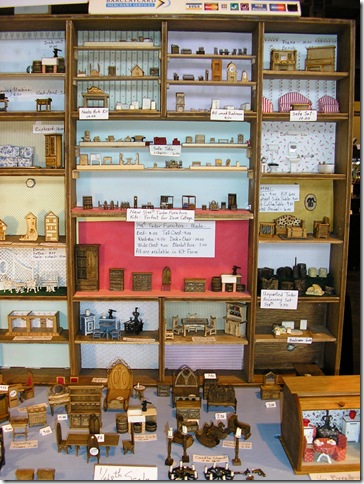 Can you spot a shelf full of 144th scale houses?

It’s nearly opening time, but we must pop over to see lovely Annie Willis 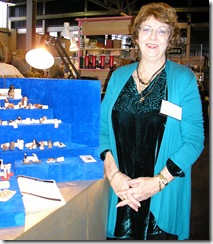 who is set up and ready to go with the help of her husband Lee. 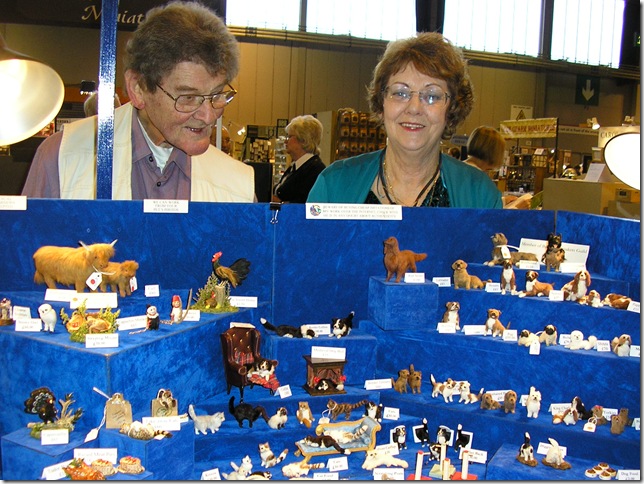 And there is time to meet Tim from Anglia Dolls Houses, who I’d only just met by phone a week ago and what a very nice builder he is, so keen to adapt his houses to the needs of his customers. 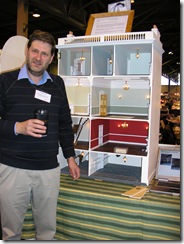 And the show is open!  The first in the queue ran so fast that by the time I got there they were half way round the hall speed shopping, though these marginally later entrants could not be in any way faulted for a remarkable turn of speed. 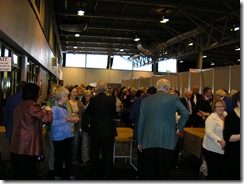 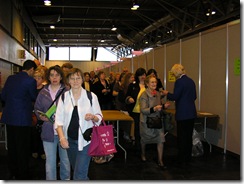 They only slow enough to buy the brochure as they run past and they’re off!

All that remained was to get back to my table and meet my own customers.  I did make time later in the day to catch up with the ever popular demonstrations; here are the Polymer Clay Guild deep in discussion: 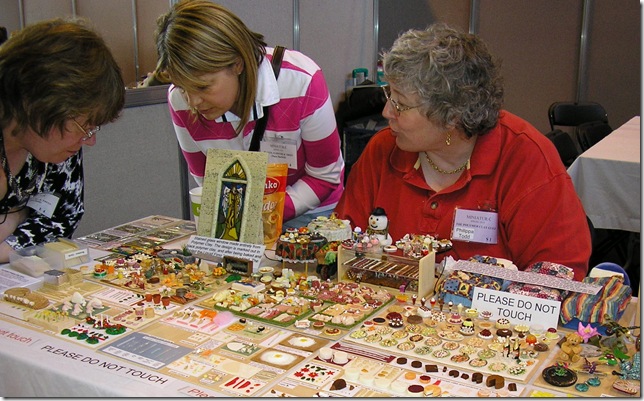 Next door to them on Waddhams display of miniatures in unusual containers I spotted this wonderful photographer’s studio in an old camera by Chris Hollis. 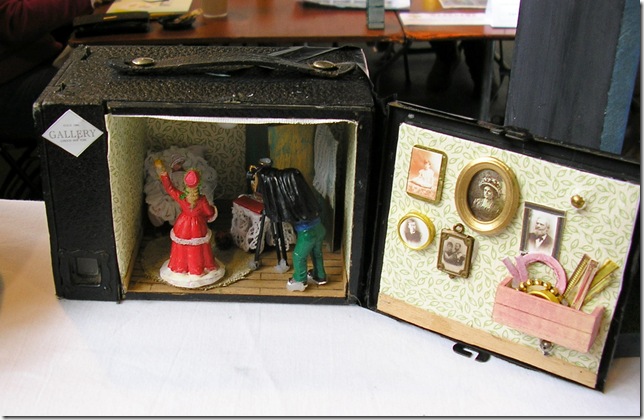 And behind that visitors making lovely Easter goodies in Waddhams workshop, 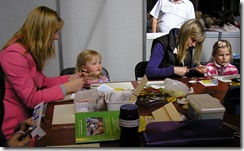 including Catrin Oswald aged four who is enjoying her very first Miniatura. 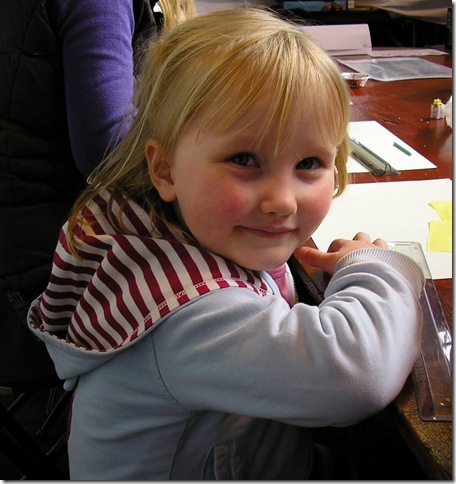 the doors open tomorrow morning at the brand new ten o’ clock after the clocks have gone forward.

I wonder if Malcolm will put all the miniature clocks forward an hour?  (There’s only one way to find out, see you there!)

This entry was posted in Miniatura and tagged exhibitors and visitors, spring MIniatura, the NEC. Bookmark the permalink.

One Response to Spring Miniatura live!