New dolls are on the way. A snippet about modelling in Milliput.

I’m sorry if the postings are suffering from time slippage.  The reason is that new dolls are on the way.  Whilst this website has a representative selection of what I make, it’s not exhaustive. Many items appeared, were sold and vanished because I always have more ideas than time.  Now I have a strong feeling that it’s time for a bit of reinvention.  One of the ranges that will surface are the very small dolls.  These little solid bodied dolls have been popular since I first made them about 14 years ago.  One of the first was Mary, shown here on the right.  She is 2 inches tall and felt like a miracle of miniaturisation when I made her. 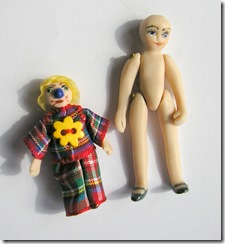 As you can see from the clown beside her I can now make smaller dolls in this way.  Mary and the dolls like her have holes made right through them in the poured clay and also through the arms and legs; once fired they are strung by wire through the holes, which is then twisted into loops so that it won’t come out again.  The disadvantage is that the arms and legs just go up and down so the dolls sit with their legs stuck straight out, also they cannot be bent to dress them:  the clothes have to be sewn on permanently with ways devised of moving the needle round the solid body.  The facial features and usually the shoes are china painted and re-fired so this decoration is permanent.  Hair has to be glued on for these dolls, but because there is little of it has proved durable; examples I made thirteen years ago are still good as new.  However, these dolls, once I got my skills up to speed, are relatively easy to make, the main tricky bit is not snapping the limbs, (which are shorter and in some cases, thinner, than matchsticks,) when I am cleaning the greenware.  Once the porcelain is fired these compact little dolls are very strong.   Another advantage for collectors is that I am still happy to sell these for fifteen pounds each and at that price they make very good dolls’ dolls for most sizes of big dolls.  They also make reasonably priced real porcelain dolls as ‘stock’ for 12th scale toy shops.  And, also, at two inches and under, you can have a large collection in little room, which is always a good thing.  There have been 18th century style dolls in this group. New last year and popular at Miniatura, but yet to appear here for sale have been the clowns, though one featured in the animated Christmas card, which you’ll find archived in December under Happy Christmas. 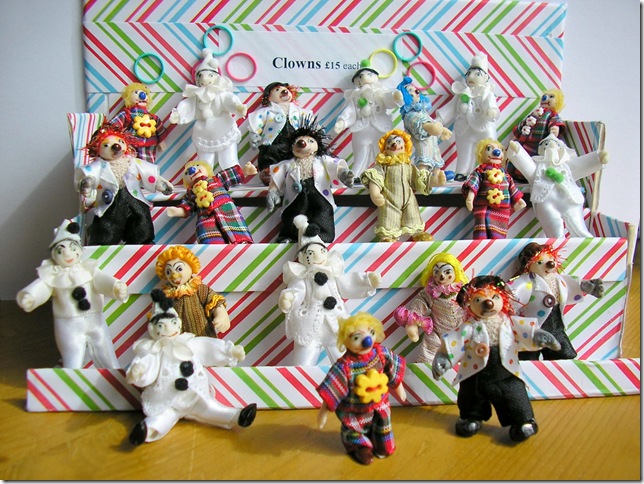 Different styles of clown have their own body and limbs and are poured in different coloured porcelain. Each individual clown has painted variations and variations in costume,  no two are the same.  They will appear here on the site shortly, (probably after the January sale, postponed by the swine flu, but still on the way eventually.)

However, the thing that is occupying every waking minute is an entirely new range of dolls made in this way.  It takes a day to model each one and in the range there will be quite a few, more later if they are popular and I think they might just appear here before Miniatura, possibly, depending on the time, because an entire new range does take at least six months to evolve, even when they’re only two inches tall.  At present they don’t look very inspiring. 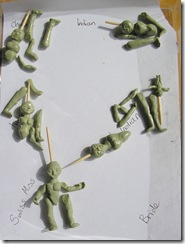 The poor little things are modelled in Milliput, a two part epoxy resin developed for plumbing use.  (Loyal readers will notice the plumber creeping in again.  There is a possibility that there should be a shout, call or catchphrase, one should be required to shout, call or phrase, every time a plumber is spotted in this column.  Plumber ho! springs to mind (and also the lips with alarming ease.).)

Milliput is a wonderful thing, I could not cope without it. Every doll you will see of mine on this website started life as a set of Milliput sculptures. Each porcelain part of the doll shown in the title banner was originally a Milliput shape.  Many years ago I interviewed people at the factory in Wales where it is  made for a magazine article and very lovely they were and no doubt still are; they’re making a great product.  Equal amounts of the two Milliput sticks in each pack are broken off, mixed wearing gloves, as it is an irritant, and, when thoroughly mixed either used to mend a car, a boiler or a drainpipe Plumber ho! even underwater, or a submarine, diving bell, radiator, tank or similar item if you have one, or if not you make a doll.  Or a model army, or whatever else.    For a time a decade so so ago, some doll makers used this as the finished item in  miniatures and even got dolls made this way into  museums.  The disadvantage of this, and the reasons I would not dream of selling dolls or figures made of Milliput are two fold. Whilst the material itself can be used to join two parts or fill a hole, joints made as separate pieces and subsequently bonded, after curing, have a tendency to come apart.  You could overcome this problem, if you were making figures for yourself, by burying wires to join either side, as an armature.  The other huge reason is the surface.  Smoothed with water the surface is shiny, brilliant for taking a mould off but not wonderful for bonding paint.  I have a major objection to dolls that cannot be kissed in case it wears their faces off.  What’s the point of a doll you can’t play with?  The nature of the material is unsuitable for children’s play and most surface coatings to make the colours durable would be child unfriendly too if not actually toxic. If, however, you are into adult modelling, just looking, dioramas and solid sculptures, this could be the thing for you, though for me it is the indispensible means to a durable, handleable finished porcelain artefact.

Milliput takes about three hours to cure at room temperature.  As the finished piece has been formed by a chemical reaction taking place in two mixed substances to form a new substance, the cured item is permanent, solid as a rock and durable.  It is also sandable and drillable.  For novice modellers the problem is one of speed, you only mix all of both sticks once.  The way it preserves all of your ghastly early efforts is very educational.  The speed, of course, is so that you can get on with mending the leak and not have to sit with your hand on a hole in a hot boiler Plumber ho! and charge the customer for just sitting in the airing cupboard for several hours.

The shiny surface property also affects gluing after pieces have cured.  This is noticeable not just in gluing two Milliput shapes together but also in gluing fabric, cords, metal and so on to the cured item.  The surface, once cured, will repel the glue which the fabric will take up.  What you get initially is glue soaked and stained fabric which will fall off as it dries out.  You could consider Milliput as the basis for models which are not required to be coloured or have fabric attached to them.  The product comes in several different colours; in any pack the two sticks, the base and the catalyst, are encased in different coloured plastic bags, providing you always use the contents of a clear bag with the contents of a blue bag in equal amounts, you can achieve several different colours in shades of green, terracotta and white and, of course, marbled variants of those.  For modelling garden pots, tiled floors, fields of battle, multicoloured space monsters and grey boilers Plumber ho! you could not do better.  I have yet to try the new black shade; having experimented with the other colours I boringly stick to the yellow grey, which produces green doll shapes.  I find it easy to think in green and I would say I detect slight handling differences in the colours, though this could just be me.  I would also say that other modellers do not have these problems, or have overcome them in ingenious ways, or are applying the product to models in different scales.

Compared with polymer clay, which I initially used for a couple of years for master models, Milliput is much stronger and more durable. Compared to air drying clay Milliput is not fluffy, stringy or fibrous.  Compared to either of those and any other product which takes its permanent form by drying out, and is therefore not permanent at all because it can be rehydrated, Milliput has superior lasting qualities.  I have dolls parts I modelled fifteen years ago that I could still take a mould off today, were it not that learning has taken place and I would not touch them with a barge pole now.  If you have tried polymer clay and don’t like it you could try this alternative.  In the UK Milliput is available from independent hardware shops, where it it usually half the price that you will also find it in specialist modelling suppliers.  A pack of the standard yellow grey costs £2-50 at my local shop. If you cannot find Milliput elsewhere, I am aware of alternatives; in other countries look for similar products by asking for a two part, quick setting epoxy resin in  mixable sticks at building supplies and plumbers’ wholesalers Plumbers ho! though, of course you’ll have to make your own experiments with them.

The main thing to note is to wear thin rubber gloves for mixing to avoid allergies.  If you find smoothing with water is starting allergies, you can try smoothing with baby powder. You can also use baby powder if you are using it to make moulds, for example when pressing polymer clay into a Milliput mould, a dusting of powder will prevent sticking. Shelf life is not endless.  I try to keep a pack around for when inspiration strikes but packs found at the back of the shelves after several years have formed a strange skin and do not mix well, like elderly indoor spinsters.  The official policy is a two year shelf life, though if this is new to you, I doubt you’ll manage to keep leftovers untouched for longer than three months.  There is more information on the new Milliput website and there may be articles with modelling hints here in future, meanwhile you may wish to take yourself off to  www.milliput.com while I get on with making new dolls. 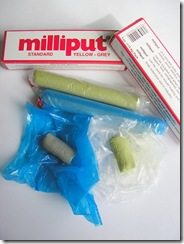 I did make an entire room with Milliput for that magazine article some years ago and have a feeling it may be part of the detritus in the spare room wardrobe, which had a floor, once.  If so it may surface here next week, you can never tell.

This entry was posted in Dolls and tagged clowns, Dolls, Milliput, modelling, plumbers. Bookmark the permalink.

One Response to New dolls are on the way. A snippet about modelling in Milliput.