When the web manager was four years old he was given a plastic retractable trick dagger.  He went round poking things with the blade vanishing into the handle and every time he poked something he said ‘Dag’. It’s obvious when you think about it: daggers go ‘dag’ and they have in this house ever since.  Which was no consolation at all when I dagged myself very thoroughly with a scalpel half way through mould making.  The scalpel dagged into my index finger to half the length of the blade and stayed there, quivering like a cartoon dagger while I dashed, unintelligently, around the kitchen like Road Runner making cartoon noises.  I bled copiously and once I undagged myself and ran the nice warm water over it, even more.  There was blood everywhere, though not, thank goodness, on the moulds, which is what the effort was about.  Annoyingly I had sustained the dag early in the day and had to spend the rest of the time until I finished at half past eleven at night, with one bandaged finger stuck up in the air which is considerably less dextrous than I wished to be.

The cause of the dagging was not the moulds but the method of making them.  If you have been through to the shop and seen the palaver necessary to produce moulds you will see that the mould boxes are made of Lego.  This wonderful toy is engineered to thousands of an inch, which means that Lego mould box walls are nearly watertight.  The boxes can be built to any size on the bases, so that I can make moulds for any doll from 7mm to 18 inches.  For smaller moulds I use regular Lego; for larger dolls Duplo and for the really big ’uns the giant rip off bricks that you find on markets sometimes.  None of it is a hundred percent watertight, as you can see by these boxes yesterday with the moulds still in them and the little puddles of plaster leaking out and threatening to run down the cupboard doors on to the carpet that was already horrible when we arrived 20 something years ago. 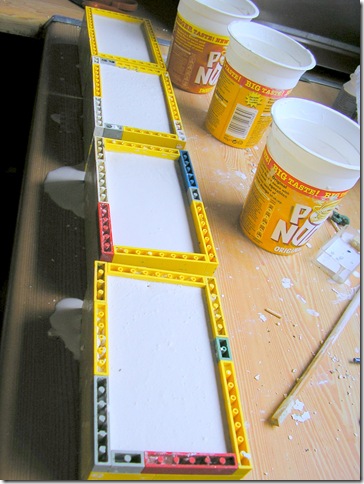 If you are a Lego enthusiast you will see that at this point the bricks are upside down, which means that this is the second half of the mould you are looking at, as the first half, already poured and solid, is upside down on the counter.  If you are a snack enthusiast, no I have not just snarfed down three pots of noodles, I use the washed out pots for mixing plaster because they have the most wonderful smooth interior surface; you can ping set plaster residue off and re use the pots numerous times.  The interior and the capacity make Pot Noodle pots invaluable for many types of art and yes, I have tried supermarket brands and no, they’re not as good.  I also love Pot Noodle pots when home decorating and gardening.  I can’t think why the adverts bang on about the noodles, other than that they are very handy when every inch of the kitchen is covered in plaster except the kettle; they should advertise the pots and fill the interior with something less than 200 calories but only if they want to increase sales exponentially.

The Lego bricks would probably be more watertight if I used four square type bricks rather than those with one row of pips.  Early experimentation with the web manager’s Lego stash showed that one row bricks, although less watertight than the double bricks, were easier to handle.  A double brick, though more secure in the placing, would increase the size of the mould and box to wider than my little dagged hands could easily manoeuvre.  There is also the width of the bases to consider.  Current small bases with a one brick strip round are just the right size for the parts for a solid body two inch doll or the hollow upper or lower limbs of a 12th scale adult.

Some years ago I took a trip to Birmingham to the Lego shop in search of large quantities of long one brick wide strips.  It was not possible merely to buy the bricks you wanted; some jolly fun person had made it into a game.  I was issued with a round plastic box and charged per filled box, the game being to cram as many bricks in as ingenuity would allow.  I hate enforced fun almost as much as I loathe being instructed to ‘enjoy’ and was beetling about, muttering and cramming when another customer kindly demonstrated the most efficient method of box filling.  We fell to talking as we filled.  She and her husband, who soon joined her from shopping elsewhere, were perfectly normal-looking people who had filled their house with Lego models.  Their Lego shopping trip was for roofing bricks for the model factory they were building in their basement.  As they described with shining eyes and obvious love for each other and the Lego, how they sprang from bed each morning suffused with joy at the thought of the progress they would make that day and how many hundreds of bricks they would place and lock before they fell into bed, exhausted, late at night, I smiled the very special smile you smile in the presence of mad people and agreed with everything they said, in order not to annoy them.  In between box filling they frequently held hands, as they enthusiastically described their joy in building problem solving and how heartily they laughed when entire chunks of building fell off, humorously.

Gentle reader, that day I was glad to be only a looney miniaturist.  I so was.

Anyway, back at the factory, the not 100% watertightness of the one brick strips leads to plaster leakage through the walls, which leads in turn to plaster build up inside the bricks, which reduces the efficiency of the grip.  Which leads to having to stop between moulds and dig out the bricked up plaster with a scalpel.  Like this: 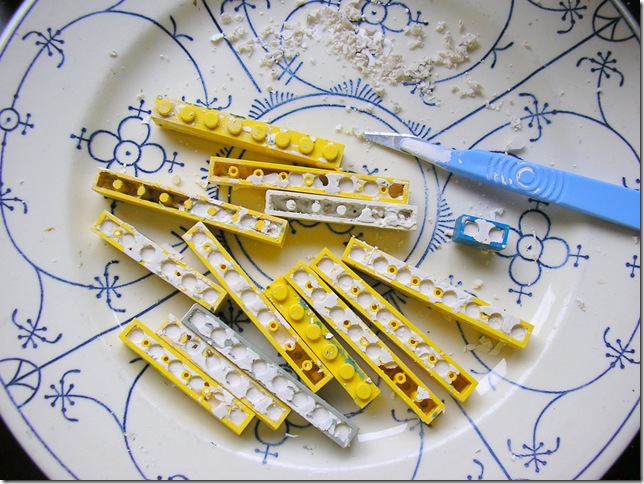 At any one mould making session there are always dozens of bricks to be dug out.  As you can see the plaster comes out mote by mote, usually incurring broken scalpels.  I used to use fresh bricks and do digging, as opposed to dagging, all at the end of the day in a bowl of water but that is slippier and more dangerous.  At least on a plate you can see what you’re doing.  Whether or not I do an interim dig out, I always dig every last flipping brick out at the end of the day and wash them and tidy up.  The only thing worse than digging plaster out of Lego bricks late at night when you’re tired would be to have to start the following morning doing it when the plaster had set hard.

It’s the stuff they never tell you, about creativity.  The boring nuts and bolts bit.  The bit that is so boring that while you are doing it your mind wanders and your fingers slip.  And that is how I came to dag myself, your honour, it was Jane in the kitchen with the scalpel and the Lego.  Dolls are made of blood, sweat and tears, like all art that’s any good.  No suffer, no art, no good.

JaneLaverick.com – hot diggety dag and a ping off a Pot.

This entry was posted in Dolls and tagged Lego, mould making, plaster of Paris, Pot Noodles. Bookmark the permalink.