A view of a room.

I am faffing around, as is my wont, sadly.  Just like everyone on the planet who is sitting the pandemic out I have reached lethargy and beyond.  I am still trying to get rooms sorted out, in the execution of which tedious task I encountered two room boxes which have not seen the light of day since they were returned from photography for a magazine.

One was for an article I wrote for an edition of the magazine about Charles Rennie Mackintosh.  This extremely famous designer arrived on the scene around about the same time as electric lighting.  He revolutionised the appearance of the domestic home which had previously been suffering from all things Victorian and coal powered.  Dingy gas lighting, thick woven curtains, huge heavy furniture and everything in practical shades of dark brown, were swept away to make room for light, space, air, pastel colours and a general feeling of out with the old.  He built Hill House for the publisher, Walter Blackie, finishing in 1904.  Researching the article I visited the house, which is in Helensburgh, Scotland, while I was exhibiting at the Scottish Miniatura. I did a bit of drawing and measuring and finally produced this 12th scale room box of a corner of the bedroom. 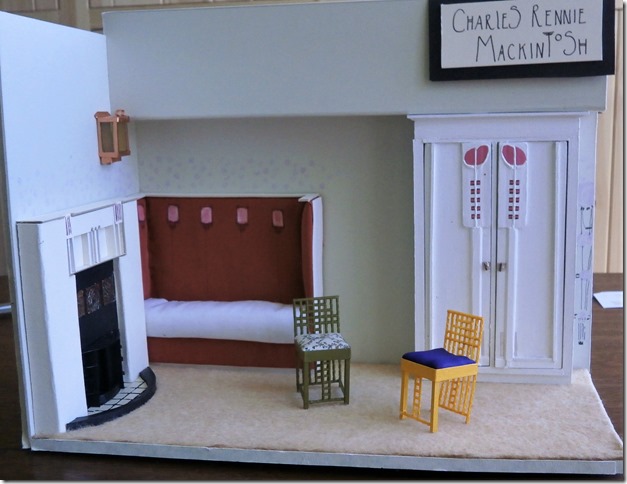 I have put the sign on the corner of it to hide a blot. When I was showing the room at Miniatura, a lady visitor brought me a clock which she had made after reading the article.  She produced it and stuck it on the corner.  Unfortunately she had coloured it with charcoal.  She was just joining in, really.  When I got home I put the room in a carboard box and stuck it on a shelf.  This is a pity, it’s quite authentic.  It took ages to measure and draw the fireplace. 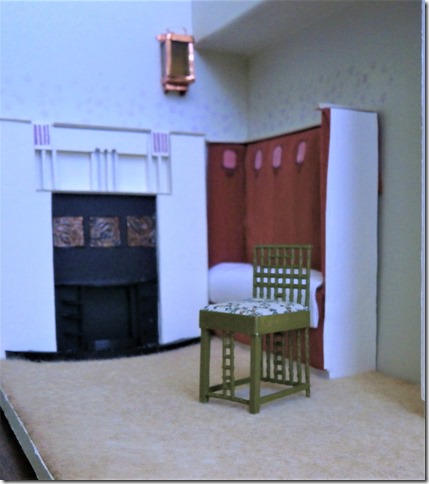 The chairs were a ‘how to’ made of plastic canvas. 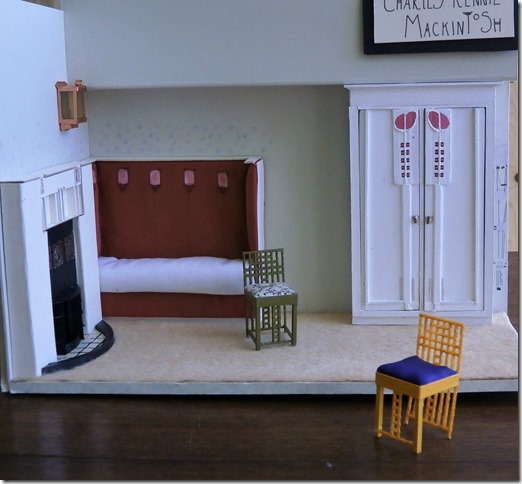 Another famous commission for Mackintosh was the Interior of the Willow Tea Rooms in Glasgow, which he designed for Mrs Cranston in 1903.  Here the chairs were along similar lines but massively tall. I spoke to locals who remembered the original.  They all said everything was about the looks, and the actual build quality was rubbish.  By the 1970s the rooms were dropping to bits. If you had known which rubbish skip to stand beside in the Seventies, you could have salvaged a fortune, with a bit of skip diving and a lorry.  The tea rooms reopened in the Eighties, however, echoing the fate of the Mackintoshes which was never to be in the right place at the right time.  They were not given the reception in their own country that they were abroad, where they were dragged through the streets in procession and generally given a pop star welcome.

They never had a family, either, though they loved children. Margaret Mackintoshes needlework is full of images of ladies and babies.  Their later lives were marred by loneliness and ill health. I spoke to a miniaturist who knew them when they were old and she was a little girl.  She recalled playing at their house, how much they enjoyed her visits and what a fuss they made of her.

The legacy of the designer lives in our homes today.  He was the first modern designer to consider white walls a viable option.  How many have you got?

I have retrieved this room box and put it on top of my cupboards, which I designed to display my houses.  It’s only made of poster board and it’s only a corner of a room but I think it coveys the reality of this architectural movement that buried Victorian width, opulence and acres of velvet and ushered in the verticality and lightness that we still enjoy today.

This entry was posted in About artists. and tagged room boxes. Bookmark the permalink.