Well, here we are, rather more than halfway through the year.  How are you getting on with all the plans you had for this year?

You see, this is the thing about life in general, the best laid plans of mice and men and miniaturists……………

So, what did you do in the lockdown, hmm?  Written your novel yet?  Learned a new skill?  Can you juggle yet?  Landscaped the garden?

It sounded so promising didn’t it?  2020. Sounded like a year you could really do something with, you know go places………………ooh in 2020 I’m going to climb Mount Kilimanjaro’ hike around bits of India, go shopping in three capital cities and take in a couple of Broadway shows.

Who would ever have thought that the most excitement you’d have would be standing in a line to get into the corner shop and see if they had any bread?

What I have actually done, is carried on with the major house makeover, which start to finish is going to be more than a year and is not finished yet. And I’ve suffered the continuance of the surgical problems caused by a surgical solution to cancer.  Thrilling. I do still read the horoscopes for the year, how wildly out was yours?

What I have done in the interval is read the whole of Terry Pratchett’s Discworld novels.  I am up to the one he wrote, obviously following a trip to Australia.  I am reading, not as I usually do, galloping through, but slowly to see how he did it and to observe him learning his trade, because the early ones were, dare I say it, not that wonderful.  It took him quite a few to really find his voice and his style.  I would not normally get the opportunity to read the entire output of one author at a sitting.  Well you never do, do you? I think if you sat down and read the whole of Shakespeare, start to finish in one go, you’d go nuts. The inside of Shakespeare’s head must have been one heck of a place for him to live.  All good authors are a little bit loopy. They have to be divorced from reality in order to live in the play, the novel, the screen play.

What are your plans for 2021? Are you now reluctant to make them, in case we get derailed again?  I think it’s quite likely.  I think we may get the usual winter viruses and mixed in……………….  So we won’t know what we’ve got and pop to the shops, sneezing, for flu supplies………….

Mother Ann, founder of the Shakers religious movement, said you should do all your work as if you had a thousand years to to live and as if you knew you would die tomorrow.  There has never been a better year to follow this precept, as we are all given the time to do things properly.

I have, nearly every day, been finishing the day by doing a little watercolour painting.  I’ve been using them as the background to greetings cards.  Doesn’t sound much but I am improving.  I watch Matthew Palmer at Watercolour.TV and copy.  Halfway through the year I am now confident I can paint a small watercolour landscape.

Notably I have not done the lockdown house I promised you.  I have just varnished the dining room floor three times.  Taking advantage of my lack of height, I just bent double and did it.  I have also moved all the junk back into the garage but organised.

I am still running the community library at the end of my drive, on dry days. This has been much used and all passers by made appreciative comments.

Did you get to know your neighbours for the first time?  I already knew mine and had more time to talk to the folk on one side who are usually in and out and busy.  And I have finished decorating the bathroom which the plumber finally fitted the toilet in last week.  And I did design and fit out my walk-in-wardrobe, which may turn out to be the most desirable thing ever, and I did give months of employment to builders, laborers, brick layers, carpenters etcetera and so forth.  And redesign several rooms and add three to the house.  What I have really spent the last year doing is trying to future-proof my home.  So I could be at home a lot, after five years of being on the road caring for my mother and three years in and out of hospital with broken limbs and cancer.*

Which, in the year that conclusively proved you can’t future-proof anything, was remarkably perverse of me. 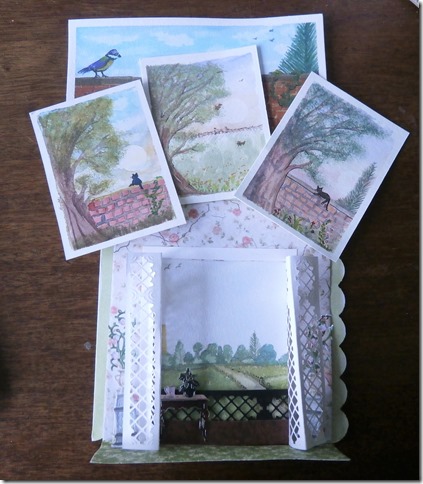 * Yes I am the person who wished we could all be at home a lot more and thought that would be nice.

Throw the rotten tomatoes over here.  That’s right. Thank you.

This entry was posted in About artists. and tagged 2020. Bookmark the permalink.