It’s nice to put the main event in the title.  I am sorry for the recent radio silence.

I thought I had the cancer back again, after alarming signs.  I was fortunate to get a hospital appointment with the good specialist, who knows what he’s doing.  Yes hospital staff are wonderful and how anyone wants to work there in the first place is beyond me, but last check up I got a trainee, who didn’t listen, she was so keen to tell me, and dismissed something I thought was major and for which I’d been referred by my doctor who also thought it was major.

This time it turned out not to be anything to worry about, though prior to the midday appointment, the secretary rang to say they were moving me up to first thing in case plans had to be made.  This struck terror into my heart, which was already fairly terrorised.

I like to think I do not frit easily.  Some time ago I read a magazine article in which some experts well known for thinking, posited the theory that the worst thing that could befall anyone was a completely happy childhood.  If everything is pleasant and easy and you have sane and accomplished parents, who not only have no issues but admire your every move, they suggested, this is not the advantage it first appears. As a teacher I was quite alarmed when it was announced that schools were going to ban sports day on the ground that someone has to lose.  If everyone is equal and winning, what’s the point of trying?  Sports day is a metaphor for life.  It’s where you find out if you are going to come last in the egg and spoon race because you weren’t fast enough, because you dropped your egg and tried to pick it up just with the spoon with your other hand behind your back, because you cheated and used the other hand and then held the egg on the spoon with a finger, or because you stopped to help someone who had dropped their egg and then burst into tears, or because a sudden spasm of your elbow chucked your egg into the crowd where it hit a parent who is also a high court judge who is going to sue your parents next week.  Make a rule that everyone has won without running the race and you lose all that valuable information and pointer to the reality of life to come.

The radio pundits also extolled the virtue of a hesitant start in life and some useful reverses.  They toughen you up a bit, they said, they help you to realise that life is not a bed of roses (which I’d like to point out would have to be thornless, otherwise that could be very character building as well.)

It isn’t.  No matter who you are, reverses are going to occur in your life at some point.  As any royal watchers know, you can even be born royal, never have to wash a cup up in your life, want for nothing, marry a prince or princess, have parties every night and still have things go horribly wrong.  You can still get diseases, suffer from addictions, get thoroughly betrayed by those you thought you could trust or just turn out short, fat and ugly, though obviously, nicely dressed with expensive shoes that don’t hurt your bunions.

And if everything had been lovely and a row of gilded flunkies had applauded every turn of your little fat knees in your gold pedal car and continued to do so up to every last scrap of hair arranged over your shiny pate, and onwards, how very shocked you would be when things went wrong.

No one is born equal because we’re all born different.  This is an evolutionary precaution so that a virus, or similar, will not wipe out the lot of us in one go, for example.  Some of us have it and don’t know it, which is not helpful under the present circumstances but would have been had vaccines not existed, or Edward Jenner not been born.

For myself (who is who I can speak for) my unfortunate start, in a children’s home and my unfortunate out-of-the-frying-pan-into-the-fire adoption by my looney mother, who had so many issues she was almost a walking textbook, was a very bracing beginning.  Every time my mother reminded me how lucky I was to be adopted, usually before she did something dreadful to me, made me so reflective I could almost have turned out to be a writer.  How I avoided being a major philosopher is anyone’s guess, though keeping me at home under the thumb, instead of letting me take up my university place was a good start..

Then of course I brilliantly married an alcoholic and then bankrupted myself caring for his demented mother until I had cancer the first time.  Cared for my demented mother with the ‘help’ of the OH until I had it the second time and so on and so fifth.

All of which was good training for the last ten years.  The previous experience of my life had lead me to believe that A) you cannot trust humans, they are unreliable B) if it can go wrong it will and C)

So when I asked the doc if it was normal for a cancer hysterectomy to go so wrong it was followed by ten hospital admissions and three and a half years of intense pain and he offered the opinion that no, I was just very, very, very, unlucky, I did not lament my fate.

I did not cover my hair in ashes nor wrend my garment asunder, neither did I bewail my lot or weep and cry: Why Me?

I learned long ago that I will try to put the egg back on the spoon one handed and then stop to help someone searching in the long grass for their egg, get in last and then write about it.

But I do believe, in my belief system, which is entirely idiosyncratic, that I have done my ten years of awful and I am now due for something better. 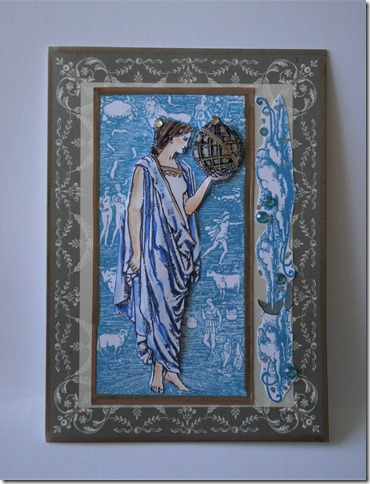 Lady of Fortune, a stamp set by Blue Fern Studios, imported by the Craft Store.com.

This entry was posted in About artists. and tagged luck, recovery from cancer. Bookmark the permalink.