For the last week I have been very mouldy.

I’d better qualify that.  I have not been mouldy like the bathroom (though to be fair, if I have gone a bit off in nooks and crannies I’ve been so busy I may not have noticed) but mouldy as in obsessed with making moulds.

Obsessive interest is the only way that moulds would ever get made, I opine.  It has to be one of the most disgusting creative processes, given that the desired end result is a pretty porcelain doll or some other tiny, dry collectable.  First I spent three days doing all the modelling.  On the very first morning I shoved a scalpel in my finger, doing a bit of micro paring to thin the thighs of a doll that will never be grateful.  I then proceeded to rub Milliput, filthy water, plasticene, plaster of Paris and silicon into the cut.  If they did that to you in a hospital, you’d sue them.  I kept hoping it would heal overnight and it never quite did.  I got up this morning, having finished at midnight and not needing (apart from washing my masters for storage) to plunge my hands into anything nasty today, and for lo!  It was healed.  Like a sort of rubbish miracle, a bit late.

After my Milliput sculpts have hardened I like to varnish them, it helps them not to stick in the mould, which they will readily do despite being coated with detail-blurring mould release agent.  If I can get the varnish thin enough but covering I need less of the mould release.  Having experimented with everything, I still find cheap nail varnish works best.  The problems with coating tiny parts in nail varnish always relate to holding them, sometimes tweezers work and sometimes they ping off, sending a small hard object partially coated in nail varnish anywhere but usually somewhere either fluffy and dusty (such as the carpet or the bin) or breakable (the china shelves).  Having arrived and caused damage, the varnish will then set like cement instantly so that the sculpt has to be prised off.  The alternative is to hold it in your fingers and varnish your fingers as you go.  This is always last thing at night and I can never find the nail varnish remover when I’m tired.  So I end up going to bed with my hands held up above the duvet line like a disinterred vampire on a stake out.  The alternative is to curl up as usual and wake welded to the pillow.

Having assembled a range of models for moulding I then got to work in my redesigned kitchen for the first time.  It was great.  I had space the final frontier but not as we know it Jim.  On the second day the other half cooked himself a bacon sandwich in the kitchen while I was working and we didn’t get divorced.  I had to clean up after him (some things never change) and had made enough room to do so without having to put everything on the floor and step over it!  Such joy, not only mould making but eating as well.

I like to do one risky model each time.  This time it was a unicorn.  I knew the head with two ears and a horn had a million undercuts and would get stuck in the multi-part mould.  And it did.  Wednesday morning I was out on the patio with the mould, which had set like one of the pillars of the earth, encasing forever the unicorn’s head.  With me I took a serious hammer, so it didn’t.  I remade the head this time with separate horn and ears and did a simple two part mould.  How it works will have to be seen.  The danger of moulding small parts to add after demoulding the casting, is that the small parts will dry out and crumble while the large part that you’re trying to attach them to is still wet.

There are no parts of mould making that are in any way dainty, I find.  The plasticene for the beds, once softened with boiling water, wants nothing more than to rush under your fingernails and stay there forever.  As does the silicon and the plaster.  The plaster is particularly evil; it hurts going in and it hurts being dug out.  For some reason this time the Lego bricks I use to make the mould boxes were wonderfully leaky.  The plaster not only seeped between them but into every little hole under each brick.  Some time ago they changed the structure of the bricks so that the strengthening projections under each brick were hollowed out, each of which fills up with plaster very readily and has to be excavated before next use or risk further seepage.  So after each use it is necessary to use the point of a scalpel to remove set plaster from under every brick, out of each hole and between each locking pin on the top.  Each mould can take up to about forty bricks.  If you do the cleaning at the end, when you are tired, this is the ideal time to lose concentration and mis-locate the scalpel, usually in your finger.

So it was with extreme joy that I did the final brick clean late on Friday night.  Now the new moulds are all drying on radiators and if they’re ready on Monday I’ll be keen to discover whether I have made new porcelain moulds or a lot of plaster lumps to take to the dump as hardcore. 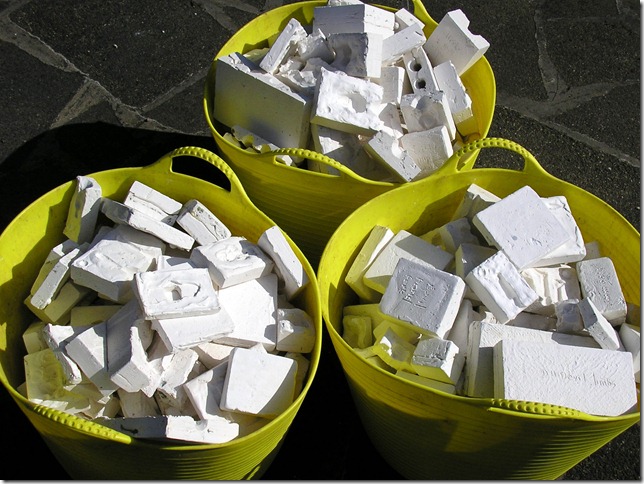