Whilst the sale is in full swing in Bargain Corner (simply click on View the Shop to the right and then click the Bargain Corner button to see the pages of reductions – there are porcelain dolls to dress at only £5!) 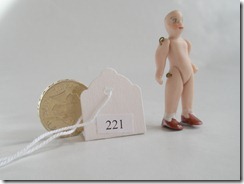 I feel it prudent to remind collectors with Vegan issues of the construction of some of my dolls.

Where a doll is described as wired, or having wired limbs it will look like this underneath. 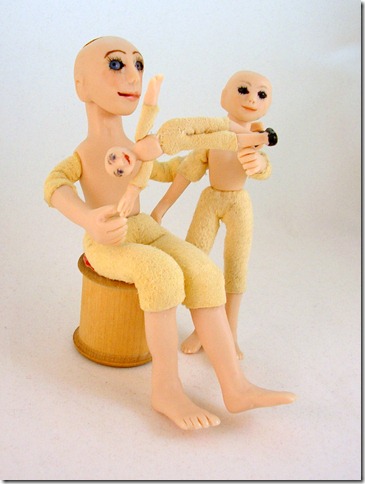 The pink looking parts are fired porcelain, though they may not always be pink, as dolls are poured to represent a variety of skin hues. The yellow looking parts, however, are always chamois leather and therefore may not be suitable for Vegan collectors or anyone with leather issues.  This is true even when the dolls are dressed 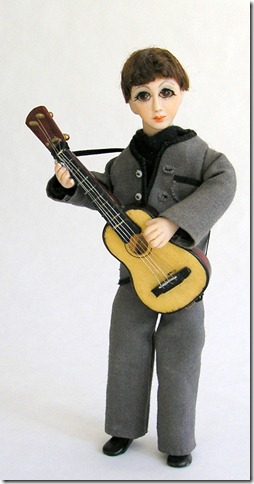 and in any size.  Additionally, some of the smaller all porcelain dolls may have leather clothing. 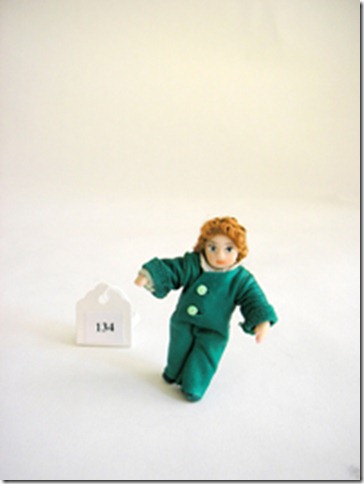 or variants such as suede 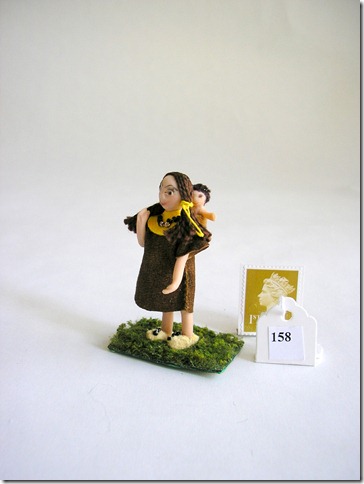 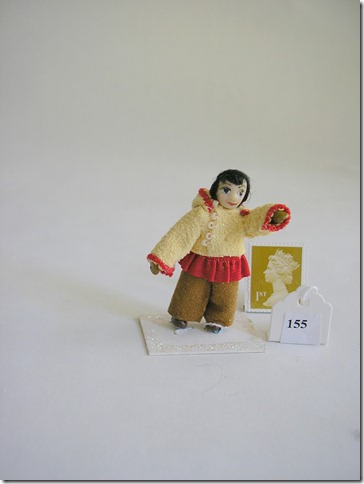 Also any dolls may have leather shoes and handbags 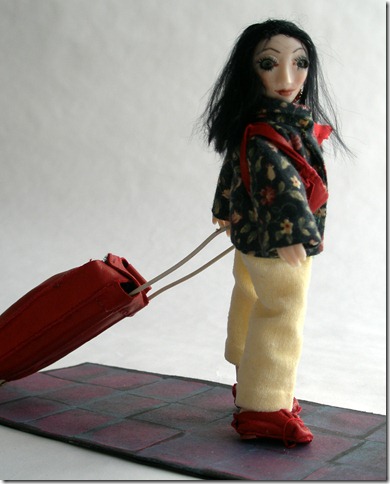 or even entire suitcases!

There is a good reason for this use of materials, which is exactly the same reason as methods of construction – durability.

When I was growing up my father had an interest in collecting antiques.  While he was involved in long conversations in antique shops, doing the deals, I used to roam around having a good look.  As I was a quiet, well-behaved child, I was allowed to have a good poke around, uninterrupted.  In the 1950s, before there were antiques shows on television, you could still commonly find such things as pieces of Georgian furniture in shops.  I crawled around under Georgian tables and looked up; I played with old dolls; I opened ancient drawers and smelled inside.  I burstingly wanted a Victorian bird in a cage that sang a song but it was £100, an unreachable sum in the late 1950s and I was asked, even by my father ‘What would you do with it?  What do you want that for?’ not that there was a chance of having it.

All the time I was looking, I was learning.  I formed opinions about things that were handmade from natural materials and their durability.  At an early age I understood the difference that skill makes to the manufacture of an item and how superior in durability the best handmade objects can be.  Of course I looked at the dolls.  I sorted through baskets of early disintegrating celluloid dolls and saw dolls made of wood and leather and porcelain and cloth, some very old indeed but still surviving.

So I understood, from first hand observation, that items made from traditional materials by traditional painstaking methods are those that are likely to stand the test of time.

When I began doll making it was specifically to create dolls as heirlooms in dolls’ houses.  I could have had much faster success, made more money and sold more lifelike dolls had I made doll sculptures out of polymer clay, simply baked in a domestic oven, with the clothes glued on.  Indeed I did demonstrate many of the methods for people to make dolls themselves for a few magazine articles.  However I would never make and sell such dolls because I have no idea how long they would last. And, realistic as sculptures can be, you can’t play with them. Modern materials are, by definition, untried by time.  Over time glues yellow and detach, air dried clays crumble,  plastics crack and resins, broken, cannot be restored.

I was fortunate when I began making dolls for sale, eighteen years ago, to be living near to a doll museum.  Naturally, I became a frequent visitor and learned a lot.  I saw white leather bodied fashion dolls dating from 150 years ago, looking as good as the day they were so carefully seamed and sewn and glued to the china painted porcelain heads.  I saw automata, sewn, and wired, still working.  I saw traditional materials and hand made dolls that had lasted hundreds of years and been played with by generations of children.  I noted that wigs sewn on to a wig cap, whilst as scruffy as you would expect a hundred year old hairstyle to be, could be restored.  I saw that strung dolls could be restrung and restored to their former glory and that properly sewn removable doll clothes could be laundered and mended many years after they were first made.

So I went and did the same!

Anywhere in the shop dolls described as all porcelain are either solid limbed, internally strung: 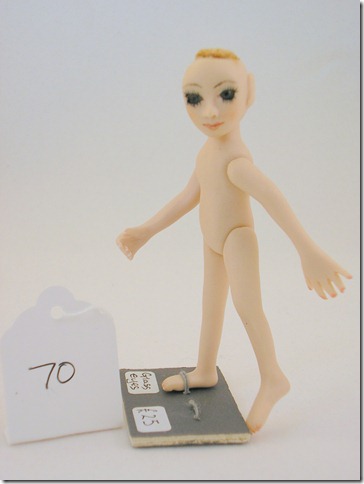 and wherever the description says wired there is leather: 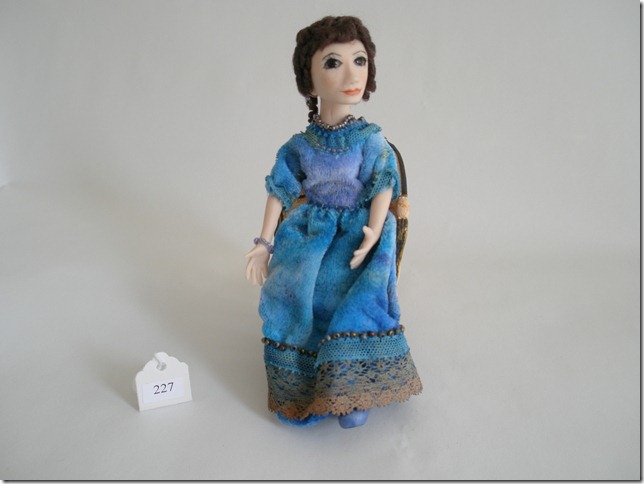 somewhere, even if you can’t see it in the picture.

And it will all last a very long time and after I have shuffled off, any competent museum will know how to restore all of my dolls.  I’m going to be around for hundreds of years, as hundreds of dolls.

Meanwhile, if you have any questions about any doll before purchase, please do not hesitate to email me and ask.