Sculpting, that is.  I know it seems as if this is going on forever and from this side of the scalpel it feels the same.  So far I have completed 15 dolls and, despite me saying I could only do two a day today I did this. 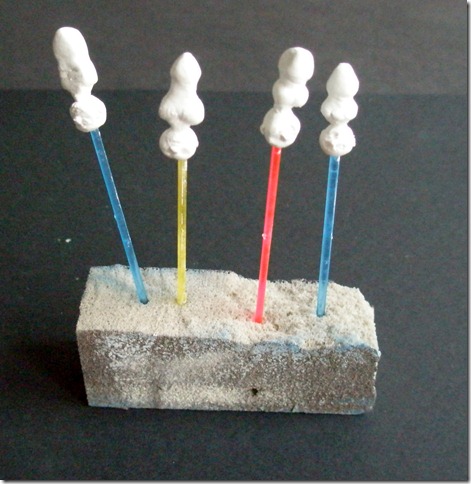 Though if I’m not too exhausted after the hour and a half it takes to water the garden at present, I think they all need limbs.  The problem, of course, is that I only have three watering cans.

Cocktail sticks I have a bajillion to the power of lots twice.

Cocktail sticks, which may be called toothpicks in your neck of the woods, are one of the most essential tools in miniatures. They are really hard to come by in plastic.  Plastic for miniatures is important because wooden ones swell in contact with wet things such as glue.  You may say: No they don’t, I have hundreds of gin and tonics decorated with a forest of cocktail sticks and lemon slices under my belt to prove it.  Well they don’t swell looked at with big eyes in a huge wet glass in the so-called real world but in miniature you can start out with a little wooden stick and by the time you’ve dipped it in your tacky glue twice, it’s a barge pole.

You would think every stationers and supermarket would stock plastic cocktail sticks, wouldn’t you?  I spent the whole summer before last looking for them when the little plastic case I started with was down to its last two or three sticks.  When I started miniaturising quarter of a century ago the common or garden plastic cocktail stick was so common they probably sold them in garden centres.  (Along with the really solid watering cans that don’t split at the seams, that you can’t get any more.  Mine has no rose or handle and it’s still better than the new ones.)  I seem to recall there being plastic cocktail sticks everywhere, there was definitely a display in the local newsagents, which was also at the time, the post office.  They had so little of anything they didn’t even sell envelopes in case you went mad and tried to send a letter, causing extra work for the postmistress, who only worked under sufferance and the understanding that half past, when she was supposed to close, actually meant twenty past if she was in a rush to stop.  I once ran all the way up the hill and got there at twenty five past on the dot and she raced me to the door from behind the counter and locked me out with great satisfaction.  She’s retired now.  I wonder if she misses it? Anyway, rubbish as it was back then, there were cocktail sticks.

You take your eye off the ball for quarter of a century and whoosh!  No more cocktail sticks.  Wooden ones, yes. Little paper parasols, yes, swizzle sticks, yes, even flipping sparklers.  I ask you, sparklers to stick in a drink!  Whatever next?  Anything, apparently but plastic cocktail sticks.  It got so that I spent half an hour at the end of each day cleaning off the ones I had.  They were good.  They were strong enough to take a really big blob of glue and spread it right along the side of a room.  You could stick a whole skirting board, in twelfth scale, in one go.  They were absolutely round and had a good sharp point, useful for modelling if you couldn’t find a scalpel. Amazing!  I loved them and was distraught when I broke one.

The situation became so serious that eventually my other half, a man not noted for his generosity (ask anyone at the pub) said:  Look on the Internet and buy some.  Then he said: I’ll do it.  (See, new millennium, different customs.)  After a while he said; I’ve found some, give me the credit card, I’ll buy them for you out of the housekeeping.

Well I was so stunned that when he said: Two packs?  I just agreed.  Then he said: There done it!  Don’t say I never give you anything -  and logged off.  So it wasn’t until they arrived that it became clear that a pack constituted ten little plastic boxes. However it wasn’t until I started working with them that it became apparent how very substandard they are.  They break if you look at them.  They also have a huge seam down the side that makes strange marks in things and hurts your hand if you hold them for long.  And they’re quite thick.  And not very good.  And I have hundreds and hundreds to get through before I can buy some more.  At the rate of a pack every quarter of a century it will be necessary to live to be five hundred and sixty to use them all.  I’ll have to leave them in my will, like Shakespeare left his second best bed.  He needed have bothered, I’ve seen it.  I bet he had back ache. And major dust mite allergies. (It was filthy.)  I bet he woke up every day after sneezing all night in his sleep and rushed to the well to scrub off the  crusty snot. Hence Macbeth, probably. Ouch damn snot!

Anyway here are four of the cocktail sticks.  I’ll turn the people the right way up; they’re currently stuck in a grit scrubbing sponge, as you do. 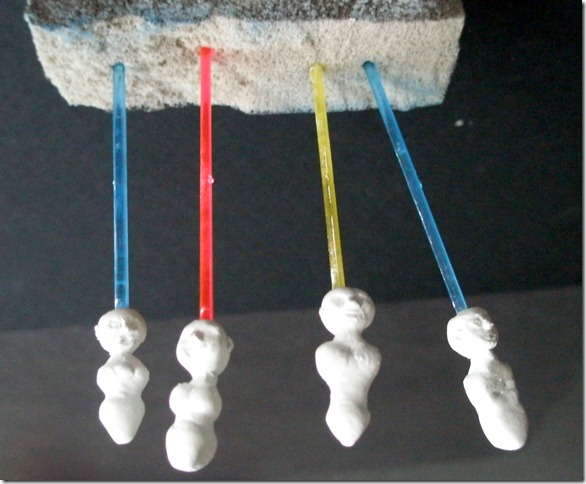 I’m sorry if the pictures are not very clear.  You have to remember not one of these torsos is bigger than three quarters of an inch tall.  Which is not tall at all.  Especially not the one on the extreme left, which is modelled on the sculptor.

The wonderful wealth I own in cocktail sticks has gone to my head (I’m leaving it in there, I just don’t care. Four hundred and ninety nine years from now I’ll be running round garden centres in a panic again but for now poof!  Let them eat olives.) and I seem to have sculpted myself talking.

Crikey, photographic realism in art and untold wealth!  (And it’s only Friday.)