Sorry about the lack of a posting yesterday on a wet bank holiday.  I am still not very well but when I can get out of the bathroom, I’ve been modelling.  I am now up to about 4 things a day, because this sort of activity has its own momentum.

Of course I still have to see if I can make moulds out of it all.  The realism of the modelling has to be constrained by what I can mould in plaster.  Miniaturists used to resin models, which can be incredibly detailed, may express surprise.  Resin models, which are made of poured compounds, that harden and can be coloured by colours stirred into the pour or surface decorated, are poured into a variety of soft moulds.  These flexible moulds made of types of rubber or silicone, can be poured or brushed on to entirely coat a model, no matter how complex the shape.  The set mould can have a slit cut into it and be turned back on itself to reveal the model.  The subsequent process of mass production can be quite quick and the price of resin castings is therefore quite low.

However resin models have disadvantages, as do many modern materials.  Both resin and that other modern dolls’ house staple, polymer clay, are inherently fragile.  They break easily and do not glue well.  Some years ago at the start of 24th scale houses I bought a chair from a maker who had reproduced his famous wooden furniture in resin to bring the price down.  Sadly the thin chair arm broke very readily, exposing a white core and wouldn’t glue together again in any way that was at all permanent, which made the twenty five pounds I’d paid for it rather expensive.

Porcelain is very strong.  The heat of my kiln turns it back almost into the rock from which the clay was originally weathered.  Moreover I can colour the poured slip, I can permanently bond coloured glazes to it and I can china paint it with colours that can be washed and will not come off and I can leave the back unglazed so it will drink in glue and stick to a wall or a floor like a long lost friend.  It is quite a bit more effort to make.  For a fireplace, for example, I have to make moulds of the hearth, the mantle and the fireplace separately and then stick them together in the wet clay.  And they will have to go in the kiln at least twice and they have to be rubbed down wearing breathing apparatus and they take ages to paint, so they are not going to be dirt cheap but I promise they will last, which is, after all, when you’re making an heirloom, one of the major requirements.

I have spent quite a lot of time transatlantically on websites to see what, pertaining to British architecture and living conditions, is missing.  The answer is: almost everything.  So I have continued with the fireplaces.  There is a another whole box of models I haven’t photographed, which are boilers and radiators but here’s the current box. 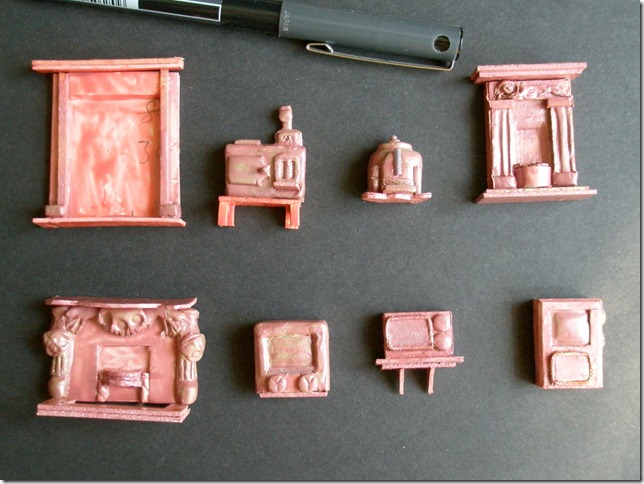 Top row there’s a plain all era surround that will accommodate the portable range next to it or the enclosed coal fire next to that or your own arrangement, supposing some of the metal makers get going with grates, I have already found some nice fireguards. Perhaps flower arrangers could put their best dried or paper arrangement there. (Actually, proof reading this, I’ve realised this could also be a modern blocked-up fireplace, in which case I need to do a portable gas fire and a little electric one.)  Then I’ve gone a bit mad with a Regency one with a sculpted figure on the frieze.  Second row on the left is a Baroque job then an old television, a wireless on its own shelf (for listening to Hancock’s Half Hour) and an even earlier TV.

The reason they all look pink is that they’re coated in nail varnish.  I have in the past bought nail varnish and painted my fingernails with it  but it is much more likely to end up on a model, and considerably more useful (it will help the mould release agent to slide on in a thin layer and preserve the detail better.)  Here’s a close-up of the Regency fireplace. 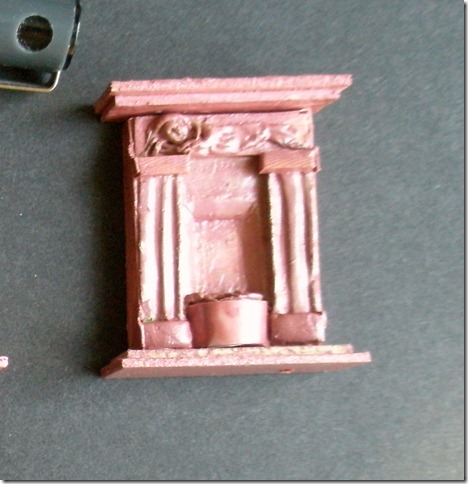 Incidentally I should tell you for inveterate Milliput modellers who got up to bed, like I did, only to find their hands coated with  a fine film of Milliput, that those conditioning nail varnish remover pads will do the job.  A good scrub with a nail brush and some soap and I’m all ready to coat them with Milliput again today.

Today I am in the kitchen with some old gas ovens, the earliest, amazingly, were in the late 19th century.  After that I’ll be on to fridges and sinks.  When I’ve finished there will be radio silence for quite a while; I have 39 models to make multi part moulds for so far.  As always if there’s something you want, speak up, once I’m into production I’m planning to be unstoppable if at all possible, because making a lot all at once and then forgetting the effort is the only way of charging the price you’d like to pay, rather than a price that reflects the work or the difficulty of the medium.

And meanwhile, I’d have to say, I’m having a lot of fun.  There’s something about handmade artefacts in smaller scales; nobody is expecting it to be perfect and, artistically speaking, I’m finding that very freeing.

JaneLaverick.com – firing on all places.