I spent the weekend fitting kitchens and found, like all the 48th scale I’ve attempted so far that it’s regressing me to portions of my past that were not all that glamorous to begin with.

I didn’t realise it while I was making them, but photographed, these are clearly the kitchen cabinets from the first flat I lived in when I left home.  The block of flats was brand new; leaving home I had planned to do with a friend from college.  We were going to strike out on our own for the Midlands and live the life of young teachers: responsible but wild at weekends, providing we’d got the homework marked.  At the last moment she came over wetter than a freshly washed face flannel : ‘Ee,’ she said, ‘I can’t leave me boyfriend.’

I was determined to go anyway, well, not so much go as escape.  I hadn’t been allowed to do the thing I really wanted which was Drama at Bristol.  I had an unconditional pass for that, instead I was kept in the town I went to school in and made to live at home, which is not much of a student life for anyone.  There was no way I was going to stay in or near the North east.  I wasn’t sure about living alone, so I asked around and found another student I’d never noticed and she was going to the town I had a teaching post in, which was her home town.  Using her helpful local knowledge she told me of three blocks of flats that had just been built and were gorgeous by local standards.

So we moved in.  The flats were furnished and brand new.  The kitchens and bathrooms had been fitted with regard to the probable honesty of the tenants.  That is to say the kitchen units had been practically welded to the walls. Later, when I fell out with the first flatmate, I moved flat one floor down by removing all the drawers, walking downstairs with them and inserting them in the new kitchen.

The built-in kitchen units had been made on site, from wood, rather than being assembled from flat packs.  This had the interesting effect of many units being a slightly different level.  The gap between units was carefully engineered to permit a fish slice to be dropped down but never retrieved.  The walkway in the alley kitchen had been designed for small slim people, which, happily, at the time, we were.  All the walls were strawboard.  I recall once needing an engineer for the heating.  The landlord despatched his, who enthused over the workmanship of the flats in general.  As he bashed the bathroom wall with an joyful fist the entire flat shook.  ‘Solid strawboard that is,’ he said, proudly.

I am not sure what material the floors were made of but thinness was its overriding quality.  In the middle flat of three floors, we were positioned exactly below a flat of three young men whose mission in life it was to meet as many young ladies in intimate circumstances as they possibly could when not at work.  The person who had equipped the flats had thought it a wonderful idea to ensure the beds had supremely mobile castors.  Thus was one able through the floor to track the movements of a bed across a floor.  It would begin, usually at midnight when one was just dropping off with a full day of school ahead, by rhythmically banging the end of the bed against the straw wall that separated the kitchen from the bedroom.  As the banging stopped the squeaking of the castors commenced, tracking right across the floor up to the point where the other end of the bed reached the very built-in wardrobe door and started banging against that.  After a pause long enough to fall asleep in, the bed, which by then was blocking the door, would be scraped, squealing back to the starting position.  On a bad night the young man in question would then go out again to a late night club and get lucky again.

The really annoying thing was turning up at school looking wasted when all I’d been doing was trying to get to sleep.  Sometimes I think the 70s happened to everyone else.

Anyway here are the kitchens. 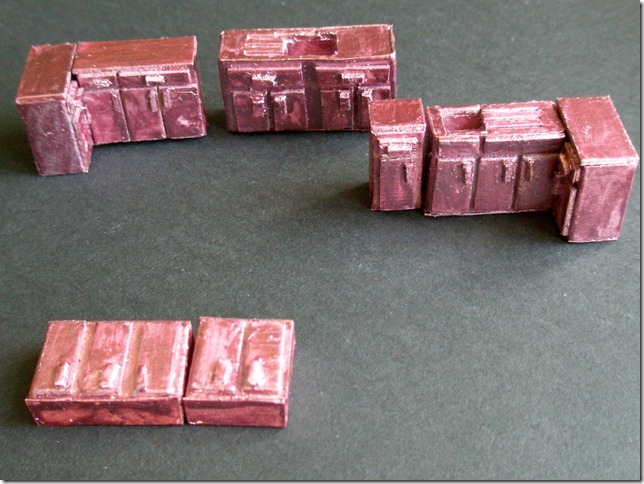 This is the entirety.  For anyone new to reading this and wondering why I’m doing pink kitchens, I’ll just remark that these are the masters from which I will make plaster of Paris moulds into which to pour porcelain.  The masters are coated in nail varnish to assist them to demould with as little destruction to the mould as possible.

In groups what I have made are 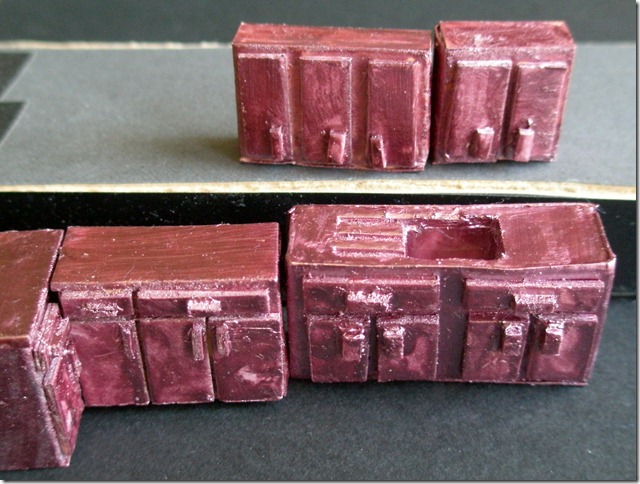 a set of base units and wall units, here just shown standing on a box.  The base units break down into 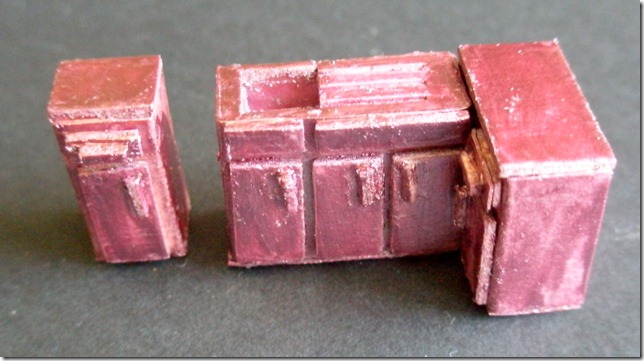 a three cupboard base and a double drainer and a left hand numb end which I have shown in the first photo.

So it should be possible to fit most 48th scale kitchens.  I have plans to offer these in several finishes and not finished at all so you can paint them your self.

I still have a few more days of modelling.  I have yet to begin on the bathrooms, so there is still time to speak up if there is something you’d like, once I get going on the moulds I’m just going to do them all until they’re done.  I think there may be upwards of 50 moulds to make  and seriously doubt anyone who isn’t a mould maker as a proper job will ever have done so many at once.  I however am determined to crack on and do as many as I can.

When the bed hits the wardrobe I shall just turn it round and carry on!