Have you ever wondered what 59 48th scale plaster of Paris moulds look like?  Would you, please, read the next sentence aloud?

‘What do 59 plaster of Paris moulds look like, Jane?’ 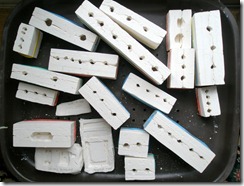 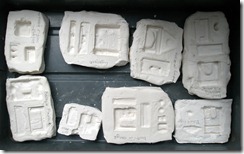 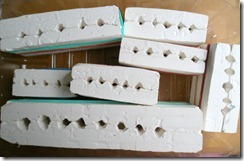 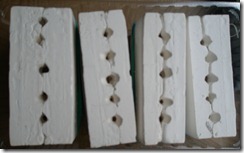 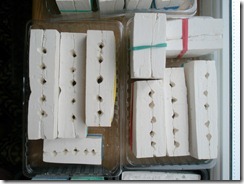 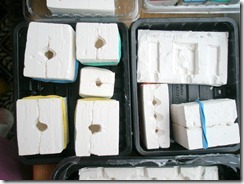 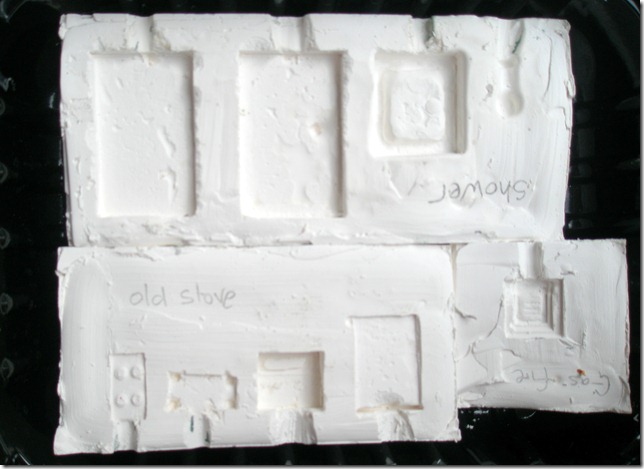 What is there?  In potential 20 dolls and 39 other things.  What, you may ask (this is turning into a habit, I shouldn’t have encouraged you,) are the other things?  You can get a clue by reading the words on the last larger picture of open face moulds, especially if you can read upside down.  There’s an old stove, a shower, and a gas fire.

If you are clever with computers and can make the blog huge you’ll be able to spot some fireplaces, there’s a baroque, an inglenook, a mediaeval, a Edwardian, a built-in range and an art deco and a wireless, its shelf and an old television.  There’s also, in the enclosed moulds, two different sets of boilers and radiators which I feel so very plumbery about I’ve written ‘rads’ on the moulds.

Now I know the other question hovering on your lips (there you go again) is: why are you writing on the moulds, Jane?  Have you not got enough writing to do on the blog?  Can you not help yourself woman?  Do you just get a pencil in your flipping hand and start scribbling?

The answer is, of course, that if you cannot tell what the moulds will make by looking at them, neither can I.  Do they look like just lumps of plaster to you?  Hmm?  Do they look like one third of a bag of plaster, moulded?  (And it wasn’t a hobby type bag either, it was the size of bag a plasterer would turn up at your house with to get you plastered.  No, not a wine box inner,* a bag like a bag of cement, a big bag of cement, not the footling home DIY thing.)

Now for a question that neither of us knows the answer to: will they work?

Good question, I’m glad you asked that.  Some I think may.  Some of the dolls are ‘safety dolls’.  They are not all that far from the 2 inch dolls of all lands which are actually 32nd scale people.  But some are very risky indeed, and many of the other things are certainly experimental.

‘Why are they risky, Jane?’ (I wish I had never encouraged you, now.)  It’s the way a plaster mould works.  You pour in liquid slip, which is clay mixed with water.  In this size to be able to pour it in at all through tiny holes it has to be very wet and runny.  The plaster absorbs the water and, in theory, you turn out a solid shape.  But there is a point at which the plaster will absorb everything and when you open the mould you’ll be left with crumbs.  Crumbs!  That would be awful!  Yes it would, but if it works I’ll have things of such fineness, I probably won’t be able to clean them without breaking them.

‘So why are you doing that Jane, you idiot?’  (Never again, I’m just going to write it next time, what is this – Pub Kwiz Nite?)  Because if it works we’ll have a whole load of stuff that we never had before for 48th scale dolls houses.  Some I’ll do finished, some so you can paint it yourself so it will be lovely and cheap and, unlike resin, strong, easy to paint and dead easy to glue but strong enough to rip it off, give it a wash and start again.  Porcelain is brilliant stuff, difficult to make but once it’s done, like a rock.

I have one more article to write, which is a review of Templewood minis kit furniture for the Dolls House Magazine (paper magazine) 48th scale extravaganza issue (October issue, out September) and then, on Monday, I hope, I shall pour and we’ll all find out.

‘Is there such a word as edgeish, Jane? Well, is there?’

JaneLaverick.com – optimistic. *If you have got plasterers turning up at your home with a wine box, may I say well done?  Many people have difficulty in getting them to turn up at all.