I am.  Well, it certainly feels like it. I did have to interrupt proceedings to go to a party and a leaving do yesterday evening.  It was nice but a bit pointless as I’d rather have been pouring porcelain and when I got home at half past ten it was too late to start.

Pouring takes ages.  One demould of poured pieces takes up to an hour, though a pour is only about fifteen minutes.  I’m calling it a pour, though in moulds this size it would probably be more accurate to call it a squirt because the holes in the mould are so tiny I have to squirt the slip inside with a syringe. 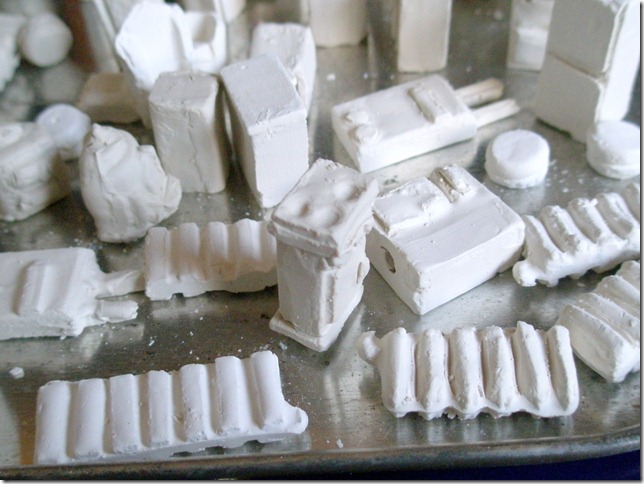 What is this?  Even though it looks like the ghost of some very crowded junk shop, I know you know what it is really.

This is what two days worth of pouring looks like. 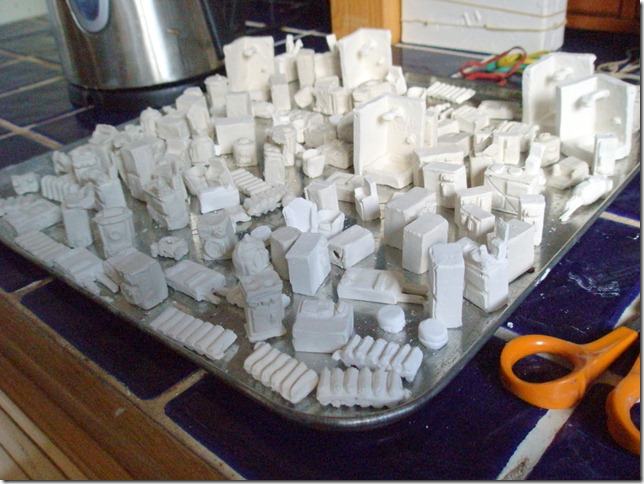 The giant metal thing in the background is the one-scale kettle, it certainly gives you some idea of the size of the poured items.  Although there are so many, this still isn’t a proper production run.  I have done quite a few of each to account for wastage and those that don’t work.  It’s one thing researching, designing and modelling and moulding an item.  It’s another to get it through all the stages.  I still, after 18 years, design things that cannot be cleaned, or just don’t look very good once they’re made but you don’t find out until you are cleaning them or take them out of the kiln.

I’m sure you’re squinting to see, so here are a few without the squint. 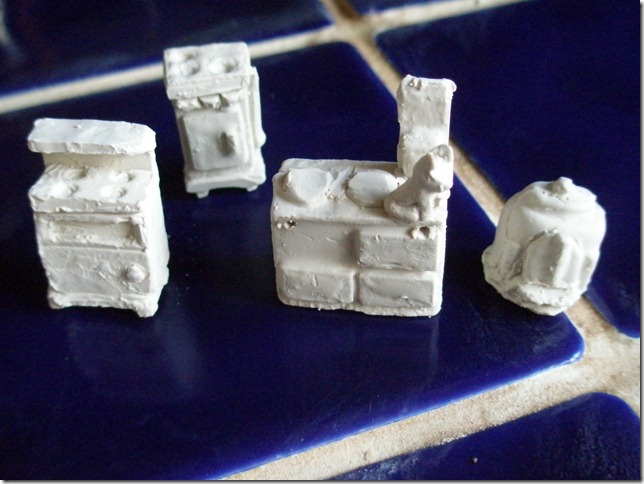 Left to right there’s an old electric cooker, a gas stove, an Aga with a cat and a coal fired room heater. 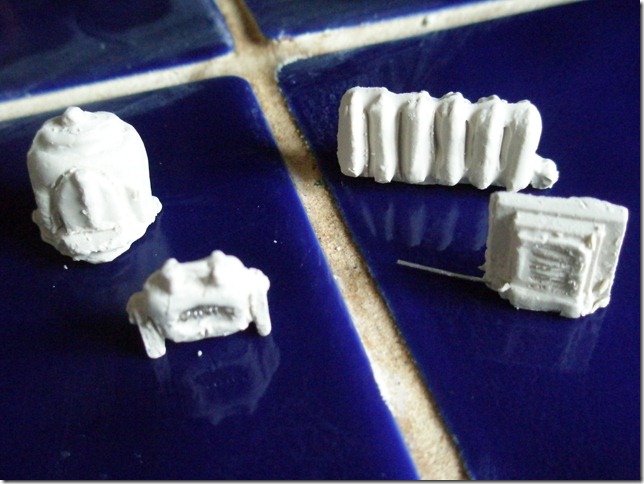 That room heater again (I have no idea why, it just snuck in) a fire worked by electricity, an old radiator and a gas fire of the sort that used to front blocked-up fireplaces in the Fifties.  That was a wonderful thing; you just turned on the gas tap, applied a match and whoosh! No eyebrows.

The history of washing machines in the wrong order.  First there’s the Victorian copper, then a late Victorian-Edwardian to Twenties portable copper which three strong man could handily place near the well of your choice, then a modern one then my mother’s with the dreaded and and dangerous electric mangle.  It’s amazing to think I’m so old I’ve worn mangled clothes.  When I’m pouring they still look as if they are. 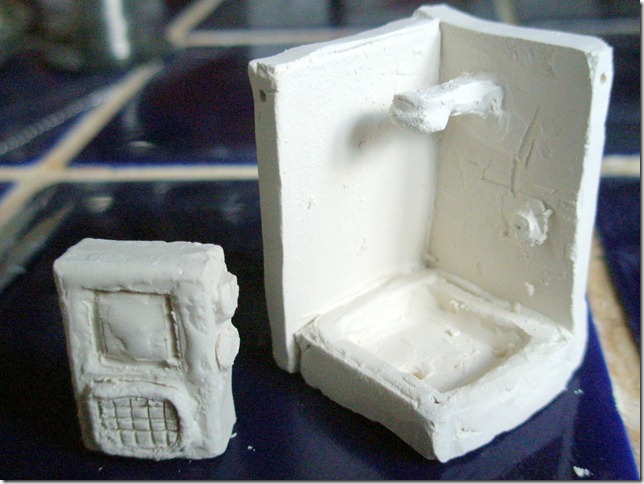 And finally but not exhaustively, a telly and a shower.  I’ve never seen a dolls’ house shower before.  You might never see one either, this is quite a risky piece with tall walls that would like to warp in the kiln, but we’ll see.  As I can already tell and I bet you can too, my style in 48th scale has quite a whiff of Wallace and Gromit about it but as it’s small I’m not worrying about accuracy and perfect miniatures; this scale is for fun.

There’s quite a lot of stuff I’ve not seen before in any scale.  I don’t remember anyone doing radiators previously.

My grandmother had one of these in the front hall of her bungalow.  It was massive, gold and had a shelf on top.  It gave out about a Watt, at best, which was why the clothing, on a clothes horse, was dried in front of the back bedroom electric wall fire, which worked.

It’s quite amazing how we all expect to be clean and warm most of the time.  It’s largely due to the invention of all the domestic wonders depicted here.  Despite our hankering for life in the past, I think, of all the times in history so far, we’re quite lucky to have picked this one.