and the kitchen sink…….

I’m on the last pouring of the artefacts before I start on the people.

I’m pouring what I hope is enough to account for high wastage.  Because the moulds are so small, although you can pick up and hide each item between finger and thumb, the seam lines and small blobs and imperfections are almost larger than the thing itself.  Here for example, are what will be a jug for a washstand, a modern electric kettle, a toaster and a microwave oven.

Or they will be once I have rubbed off the crud.  The problem is that they are so tiny there is nowhere to hold them.  To rub the spout of the jug I will have to hold it  by the handle, which won’t be strong until cooked in the kiln.  If I rub the spout enough to rub off the wrong bits I will probably break the handle which I’ll be holding with my fingernails because it’s too small to grasp in a finger and thumb.  Of course, once I have refined the spout by rubbing away the excess it will be fine and fragile but must survive long enough to endure everything else being rubbed down.  I know as I write that others working in porcelain will advise me to cook it half way to make it strong; you can for bigger things but in tiny, you just can’t get a fine finish this way.

So it’s all quite exciting.  Here’s a brief view of some of the other things.

As you can see I haven’t solved the taps problem yet.  I’m hoping a maker of white metal models may be about to come up with something.  For the Victorian type sink next to the bath I already have a wall tap and I’ve made my own pump which I haven’t included in the picture.

The getting of water into kitchens has been throughout the last 1000 years in Britain, largely a matter of building the kitchen in proximity to the nearest well and then going there with jugs and buckets.  Wells were so ubiquitous there are still unsuspected wells all over the place buried under roads and gardens.  Most recently in a development of blocks of flats here in Warwick, ground disturbances during building caused a blocked-up well to reopen on the lane down to the local pub.  This area was in Victorian times the site of a prison known locally as the Blue Jug.  The well, which must have served the whole prison, was, as you might expect, quite substantial and caused a large hole in the road and surrounding traffic barriers for some months until it was properly filled in and sealed off.

Wells as a water source continued right up to the end of the Georgian period when water pumps began to be used indoors.  A pump built into the kitchen next to the sink was one of the first kitchen built-in conveniences, the brick copper, housing a fire underneath a metal bucket for washing clothes, being probably the second, in respect of water in the kitchen.  Both were considerably predated by built-in dressers and storage furniture, arguably the earliest of which are the stone dressers in the houses at Skara Brea in Scotland, which are Neolithic.  I have seen wooden dressers built-in in the Shakespearean properties, notably Anne Hathaway’s cottage, which also has a bread ark.  This gigantic waist-high wooden breadbin is the origin of the surname ‘Arkwright’, as half a millennium ago the latest thing for keeping loaves of bread fresh as a daisy was to pop them in the top of a massive wooden box and retrieve them through the handy trapdoor at the base weeks later.  It’s a continual wonder that Penicillin needed to be made as a separate discovery.

Taps, or faucets, if you’re reading this with an American accent, were part of the revolution that occurred when  domestic service was on its way out.  It turns out whilst it’s quite handy for a servant to visit a well with a jug or pump a handle up and down like crazy for  a trickle of dodgy brown water, the lady of the house, on her own in the kitchen starting around the Regency period, (which is Federal across the pond and round about Jane Austen if you’re a book lover) doesn’t find it convenient at all.  Whilst the Romans had taps (and aqueducts and public fountains) it was 1880 before the mixer tap was invented.  Subsequently, in an explosion of domestic invention, the late Victorians and Edwardians shoved taps, spigots and valves on every domestic appliance they could invent or improve. 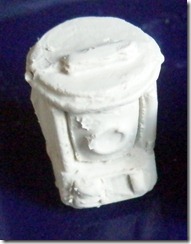 which joy was a metal box on the bottom enclosing a brick lined fire chamber which heated water in the braced metal pot with a lid on the top.  The portability being the wonder because with the aid of a mere three strong men you could stand it near to the well door, or the pump in the scullery, or, once we’re into the 1930s (versions of this being used right up to WW2) an actual tap, for the very handy filling.)

But whoever thought an open fire with a lump of meat on a rotating spit, turned by a dog in a cage in the 18th century, would evolve into a microwave oven?

It’s all getting smaller.  Will the day dawn when the kitchen has become the food synthesiser in Star Trek?  In a hundred years will children need dolls houses to be shown what a kitchen was?

It’s a quite exciting, meanwhile, if I stop trickling on about the history of kitchens and get on with pouring some, your great grandchildren won’t need to ask what sort of kitchen you had when you were a child.

You’ll be able to show them.

This entry was posted in 48th scale dolls houses and tagged 48th scale, the history of kitchens. Bookmark the permalink.