I’m still dressing dolls in this tiny scale and learning all the time.  At first I was just dressing but now I’m getting better at styles and eras.

I’m glad I did all the different dolls.  There’s no doubt about it the body underneath makes the outfit, just as it does with people.  Here’s the cook undressed and dressed. 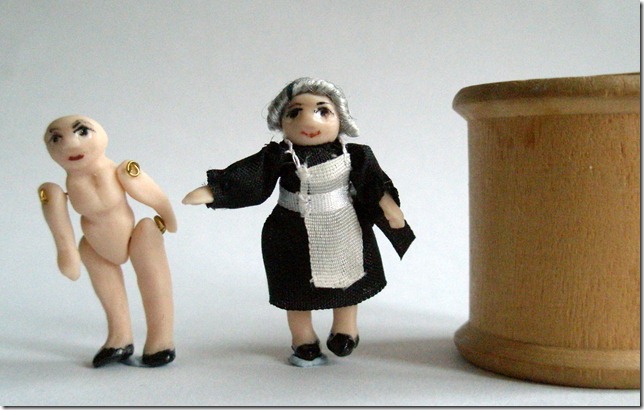 That giant piece of wood beside her is a cotton reel.  Yes it is, look. 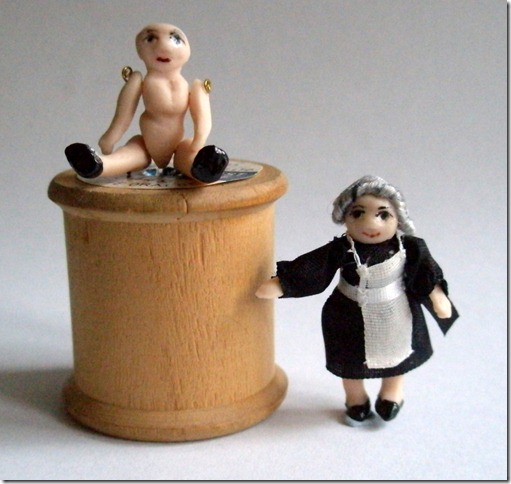 I’ve spent ages making a new stand for them and they’re all going to be presented in domes. 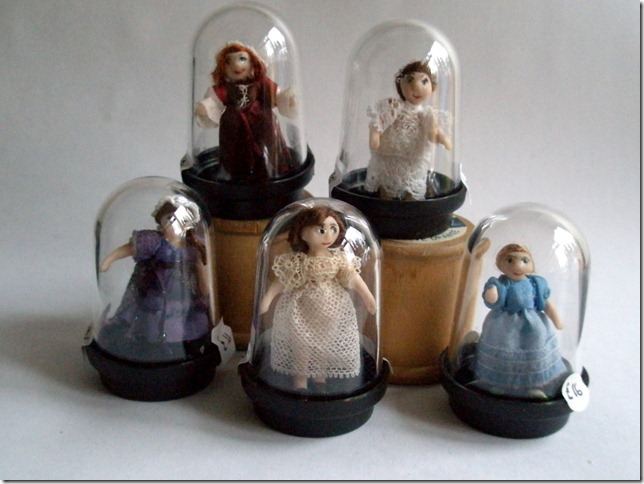 This will have some great advantages.  Shoppers will be able to pick the dolls up without worrying that they’re going to get them dirty if their hands are not pristine and I will be happy about that too.  For some reason, even though it’s Miniatura, the poshest venue in the Miniverse, I always go home looking like I’ve spent the day coal mining.  So, in their little domes the dolls will stay clean.  I’ve had to turn the bases upside down to fit the dolls inside and stick the tops on by the price labels.  Just remove the labels to release the dolls and… 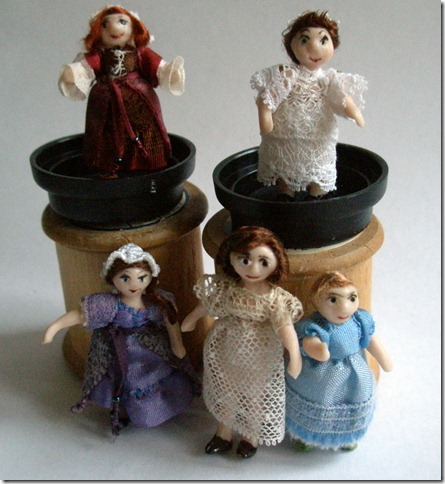 lift your doll out on her doll stand.

Turn the base the other way up and you have a free dome to fill for your 12th scale house to put on the piano or the sideboard.  You could, of course put the dome complete with the doll in your 12th scale house.  Domes filled with a variety of decorative objects were common ornaments in Victorian houses.  I did have a real old small glass dome with a wax figurine in it, which fell to its fate under the influence of some toddler ballet dancing after a playgroup demonstration.  Large domes contained anything from china statuettes to stuffed birds, though arrangements of wax fruits were very common and easily simulated in one of the oven baked polymer clays.

The jointed dolls will be £16 dressed.  I think that’s good value.  An original artist 48th scale, china painted porcelain doll, dressed  and a 12th scale dome is my sort of thing because it’s something to get round to making when you do and something to play with while you’re thinking about it.  After the Min some of those who did not find homes will appear here in the shop but only if I get busy and dress some more.  I haven’t done any men yet, or thought about the flexible dolls.  As it’s only 5 weeks to the show I’d better  get started.