Pouring over my work. 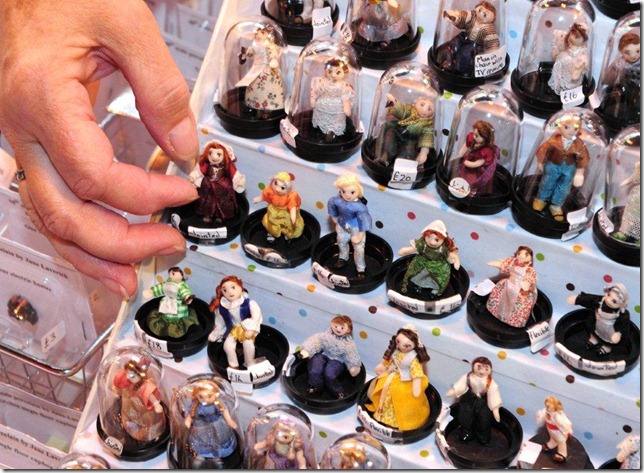 Here are my 48th scale people on display at Miniatura, as photographed by the Miniatura photographer.  What a splendid job he has made of the tiny dolls, all in focus, and my giant hand, also sufficiently in focus to see the liver spots and general filth accruing by the end of the day.

Now, I am thrilled to say, despite all the difficulties of living in two places at once, I am pouring new dolls.  I have eleven of them on the kitchen work top right now.  They have had the first, experimental pour, that finds out if the holes are big enough for the porcelain slip to slip in.  This is a close run thing in dolls this size.  You can see how small the hollow hand of the flexibly-limbed doll is that I am holding in the photograph. Some of the moulds are sugar cube size but still have to have the end of a giant plastic syringe inserted to squirt a drip of slip inside.  After twenty years of this I have the skills to artificially inseminate fleas, if necessary, though, judging by the way the little cat is scratching, my expertise will fade, unused.  I knew a head teacher who could juggle and did so at every opportunity.  I used to think this was showing off but with hindsight perhaps it was just a matter of broadening the skill base and keeping it exercised.

Not all of the dolls are 48th scale, there’s a couple of 24th scale children.  As the flexible Tudor lad was so popular, I thought he should have a little brother.  Considering the vast amount of children that needed to be born to ensure the survival of some of them, prior to the invention of spray bleach (more than a cleaner, it’s an everyday miracle, if they’d invent an non toxic one for cat fleas, we’d be laughing instead of scratching), there should be many children in the Tudor dolls’ house, for verisimilitude.  Also, they’re cute.

but this time with articulated limbs, if they work.

In between doing it, I forget how much I love pouring porcelain,  Many people may not think that covering the kitchen with a fine layer of mud is a good thing but I like it.  It’s the well dug flowerbed, indoors.  It’s the wild wet water chute, in the kitchen with your shoes on.  It’s fiddling around with tiny, barely visible motes of mud to create something of lasting value.

For the first time in the nine weeks since my father died, I find music running through my head as I work.  Better, my mother rang to say she has two social engagements tomorrow, so I don’t have to go back until Wednesday.  This is brilliant because at this size of doll you have to pour for two days to have a chance of a few getting through all the processes, so I know I will have something to show at the end of all the work.

Clearing someone else’s desk, settling their accounts and tidying out all the drawers where we found the mouse (another tail, another time) is one thing but making a filthy mud soaked mess of your own newish kitchen is quite another and very much better.

Who knows, I may even find proper writing time, eventually, once more.

If so, you’ll be the first to know.

This entry was posted in Dolls and tagged getting back to work, mud in the kitchen, pouring porcelain, tidying up. Bookmark the permalink.