Here at the fag end of the year, with my father still being dissected, with solicitors still clucking around; in a couple of days off from caring, where the request for sleep that is urgently on the agenda is like to give way to cleaning and washing in the turnaround, I take, as always, inspiration from nature.

By the arched gate that looks, promisingly, to lead to something more interesting than the dustbins 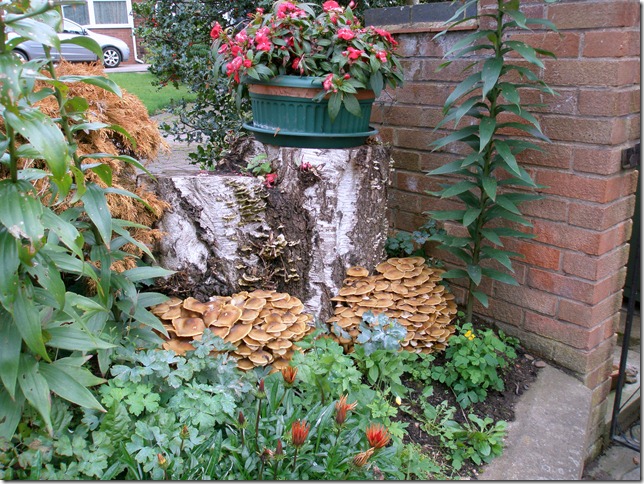 a little kingdom sprang into being behind the gazanias, between the lily stalks, below the basket of flowers on the tree stump.

The little kingdom is fuelled by the death of the tree.

The tree had to go.  It was one of several which had not been planted by me but which I had kept.

Twenty six years ago when we moved in my mother said,”Oh keep all the trees, it looks like a park, you’ll never do better than that!”

I knew I could do better than that.  Considerably.  As usual I did as I was told and then had to leave it two years later when we put the house up for sale.

For ten years the house was for sale as the trees grew.  Five years later when we decided we were staying anyway it cost hundreds of pounds to fell the forest.

The first few fellings produced polite little toadstools that still gather in bunches strewn across the lawn in autumn. 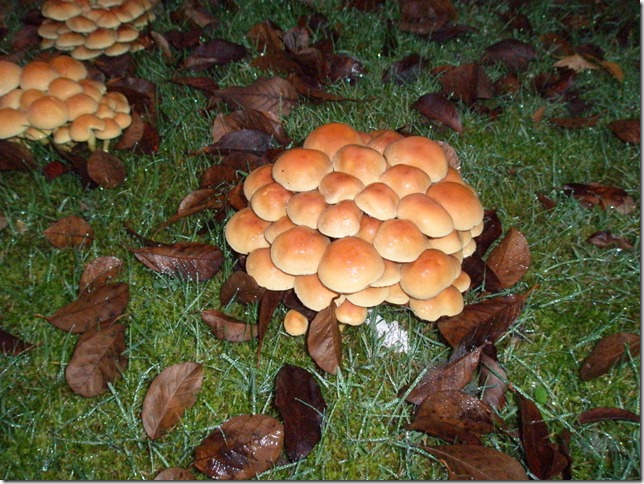 The two trees at the front were more recent.  I knocked at Ted’s next door, believing the twin trunked silver birch to be his because the people who sold the house to us told us it was.  I wanted it curtailed because the roots were under the floor of the garage, wetly and all the leaves clogged the gutters of the garage and the house.

I was surprised to find the tree was ours and foolishly engaged a passing feller to fell it, the regular feller being on his small holding in Portugal.

So for while the inexpertly felled birch kept going, putting out hopeful small branches and little leaves.

Then the regular feller returned, felled the maple and finished off the birch thoroughly.

End of, finito and done. 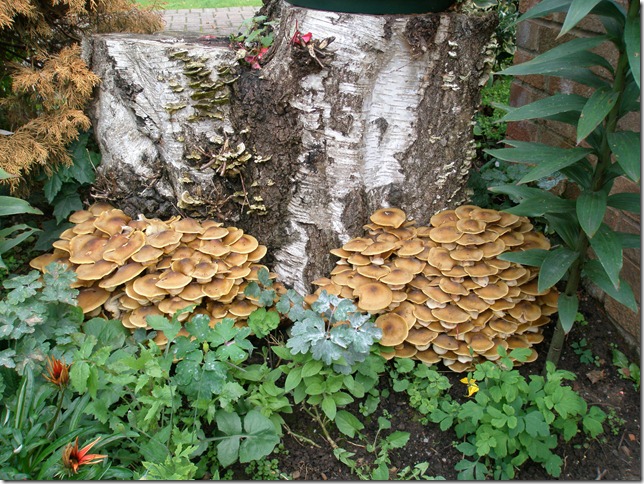 The stump of each trunk has produced its own crop of fungus, from a distance like a decorative frilled skirt.

Closer to, the structure is like the most modern architecture, awe inspiring, multi layered and complex. 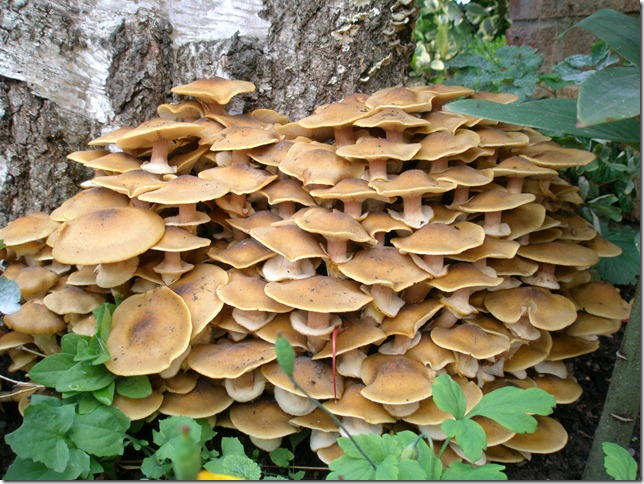 The closer you go the more it astounds. 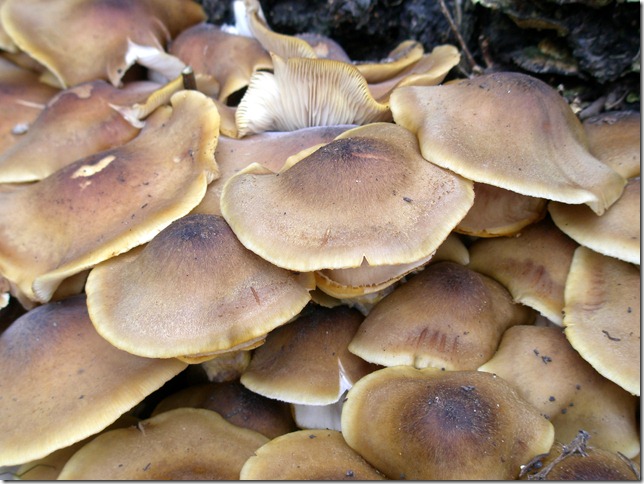 From above, like a dolls’ house, all you see are roofs but if you sink down to see sideways you can enter into magical miniature mansions 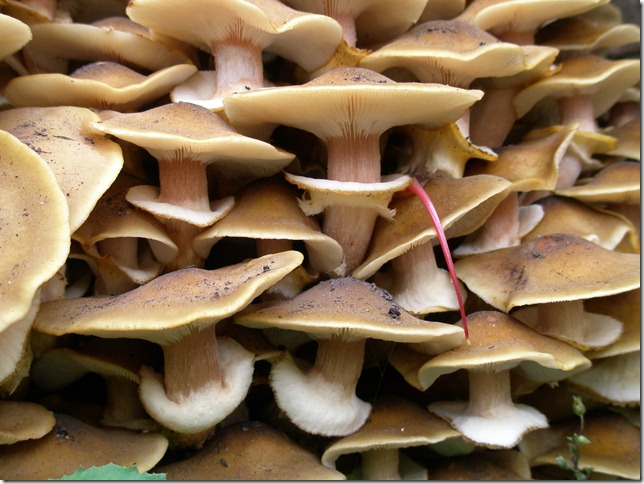 with a complex of walkways for gnomes, flyways for fairies and individual residences for residential individuals. 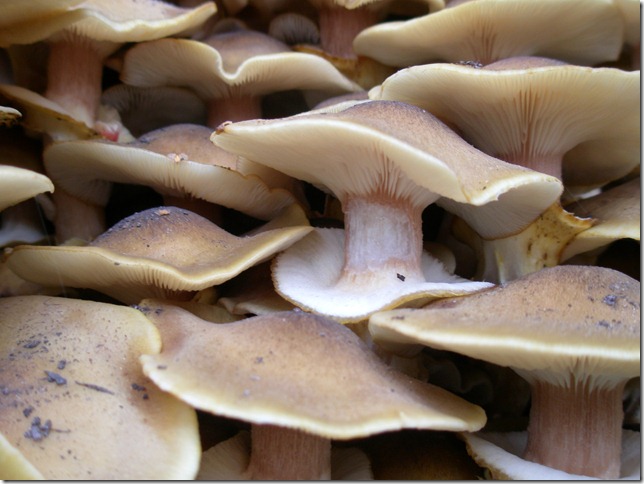 They surged so easily, over the course of a week.  Each pushed up to get a share of light and air.  Sucking the left-over life from the sap of the tree and turning it, trickily, into this upwardly mobile pushing of energy, every upturned umbrella seeking its space in the wet autumn air. 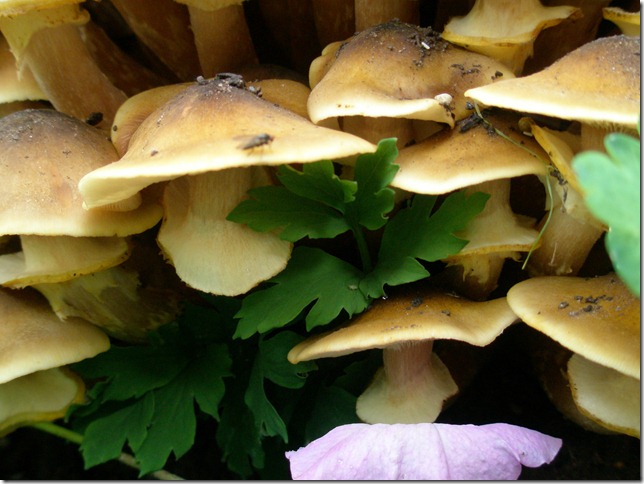 I was not alone in liking them.  Flies liked them too and poppies were quite keen to grow through them. 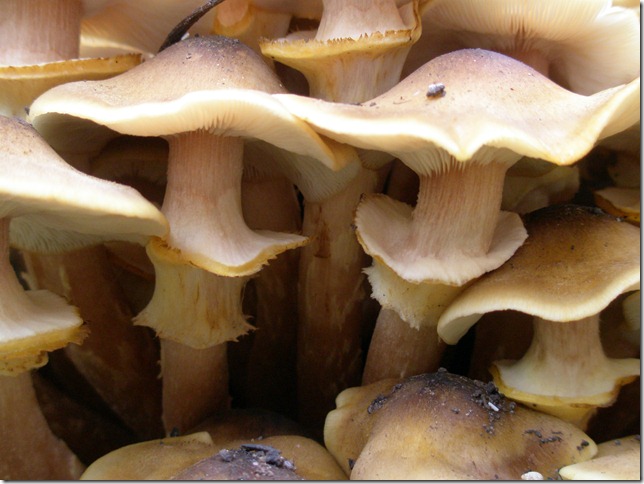 Each day the spires of the kingdom reached higher, until the first frosts turned them into a sudden black slime.

I nearly scooped it all up and put it in the green bin for recycling until I realised all I had to do was to leave the slime on the soil until nature recycled itself, returning the nutrients of the tree to the earth so that I can grow something new very easily next year. 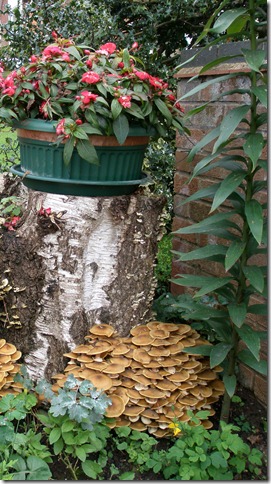 In the spring when new hope surges, I must remember to be grateful for the decay in autumn that was at the bottom of it all.

JaneLaverick.com – the cycle of life and all that.

This entry was posted in Nostalgia. Bookmark the permalink.