Sometimes, just before a show, you can sense a profound silence as every Miniatura artisan has their head down, working their socks off.  I know for a fact that some don’t bother to get dressed and others never go to bed.  I once relayed in a magazine the story of the wonderful Dolls’ House Draper, Hilary Spedding who worked through the night before the show to make the deadline and get there with every small packet of fabric, ticketed, docketed and threaded on the stand.  Knowing how cross her husband would be if he realised she had worked all night, five minutes before the alarm clock was due to sound Hilary donned her nightdress and quickly lay down on the bed so she could ‘wake’ with the alarm and get up.  I bet she slept well the following night.

All round the world of miniatures, midnight oil is being burned as busy fingers frantically fill every last creative moment.  On the Bear Cabin Miniatures stand, you can see that Hywel Jeffreys has been carving out a place for himself in your log cabin with new designs added to his Rustic Woodland range of furniture. 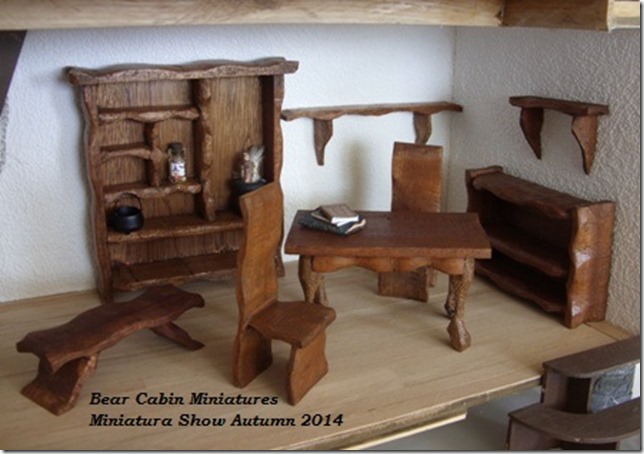 I don’t know if it was Hywel or Julia who managed to get their fingers off the miniatures and on to the camera.  That takes some doing but wasn’t it worth it? 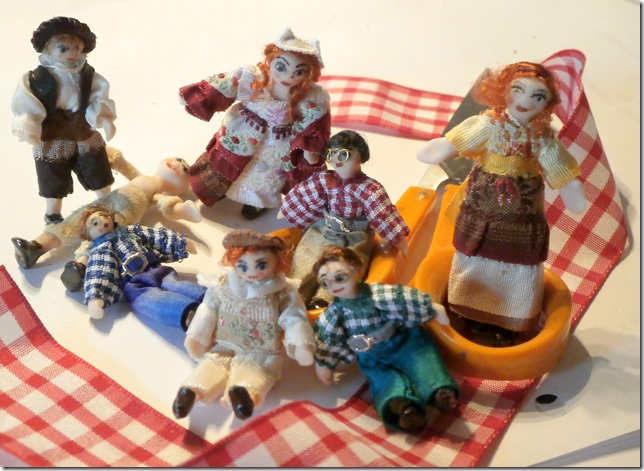 I know you know but those are nail scissors the 24th scale Tudor girl and the 48th scale modern Dad are standing in the handles of which and that thing looking like a giant red carpet is a snippet of normal hair ribbon.  I struggle, as do all miniaturists, to show you how small the small things are.  The organisers of Miniatura and every other show there’s ever been will go a great deal further than the extra mile to photograph artefacts against household objects that anyone in the world will be familiar with.  Here are my relief pictures from a couple of shows ago 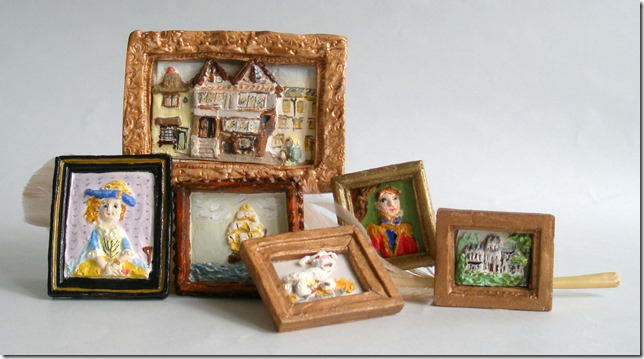 spot the feather, not a giant quill, just a smallish feather I found in the garden.

Many years ago now Muriel Hopwood spent a day of her life with the smallest bear in the world and a selection of other small things you might know about, she eventually produced these photographs, though you still have to get the bear in your hand to be as amazed as the incredible work, by Bettina Kaminsky, deserves. 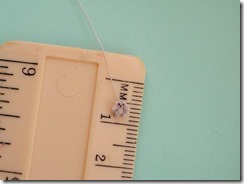 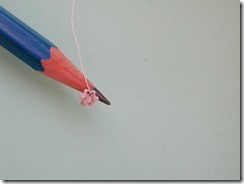 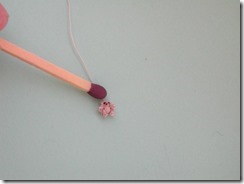 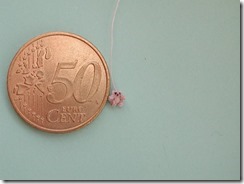 Sometimes the better the miniature, the harder it is to see.  Brooke Tucker, confusingly, used to offer courses where people miniaturised the room they were staying in.  No one went completely insane, as far as I know.

Last show saw the return of Costume Cavalcade, as Teresa Thompson had been away for many shows battling awful illness.  In the spring she was back, looking like herself again with a full head of hair and as many dolls as she could manage.  This time it is her aim to replace the dolls that absented themselves as she was taken ill and in recovery.  Here is her set of dolls in the Georgian range, the lady is in a new colourway to celebrate the fact that Teresa is properly back. 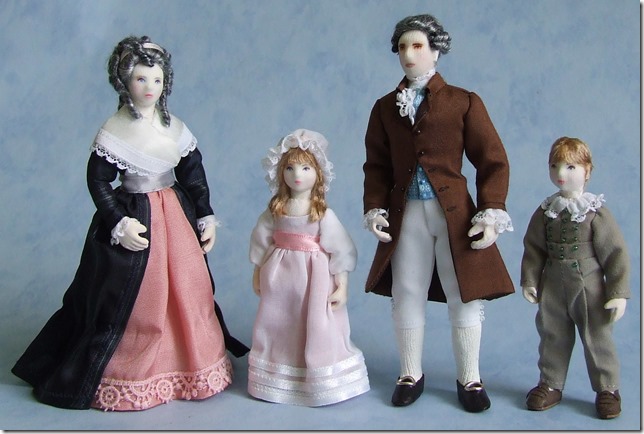 One of the wonderful things about Miniatura is that the exhibitors love it every bit as much as the visitors.  There have been exhibitors who thought they had retired but unretire themselves just because they miss the show so much, I am hoping to exhibit  until I just get too ancient to be allowed out.

It is still not too late to buy tickets for the show.  The Show is at the NEC Birmingham next weekend on Saturday 20th September and Sunday 21st September, the show opens at 10 on each day and closes at 5.30 on Saturday and 4.30 on Sunday.  You can get tickets by phoning the hotline 0121 767 4100 or by visiting the Miniatura website at www.miniatura.co.uk and clicking on BUY TICKETS in the top right hand corner box of the home page.  If you are coming by car, parking is free for this show, collect your voucher as you leave the hall.  There are direct rail links and the airport is almost next door with hotels onsite, details at www.thenec.co.uk

I am hoping to bring you more exhibitor information before the show, though the illness of my mother may steal my time, in which case, God willing, I’ll see you there!

JaneLaverick.com – it’s the most wonderful time of the year!

This entry was posted in Miniatura and tagged Midweek Miniatura. Bookmark the permalink.