Sundowning with a crash.

The usual visit went fairly well yesterday.  My mother did not trap me in the dining room while everyone scarpered to have a moan.  She stopped doing this for a while when  she couldn’t sit on her padded dining chair for long.  I then bought her a memory foam chair pad with a seat and a back so she can sit and bang on for an hour or more, and she does but we escaped after half an hour or so yesterday, which was a blessing.

There was news that was not good, one of the carers my mother really likes has got herself a new job and will be leaving at the end of the month.  This news was got past with minimal angst and we retreated to the lounge in reasonable spirits.  The carers reminded me that she had complained of a rash, which turned out to be a sweat rash.  Her thermostat seems to be breaking down so that her feet are cold but her middle is very hot.  The other half kindly volunteered to go out in the rain and went to the chemist shop that dispenses her dosage box to get some cream that will not interfere with anything she is already taking.  I applied it to her, we had the cakes I had baked and taken decorated with the cake lace which is proving so therapeutic to make 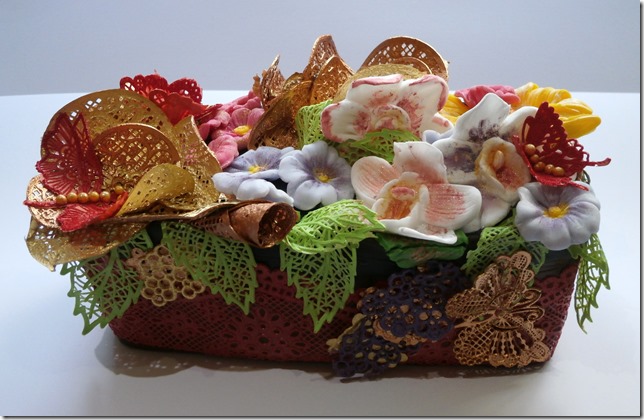 and, having waited long enough to make sure the cream caused no problems, we departed.  Other than my mother complaining about everything and rehearsing the death of my other half’s mother to him about three times, all seemed well.

So we got home, got a take out, located and fed the cats of the S&H and put our feet up.

Then at quarter to ten my mother got hold of a phone, well, to be exact, the carer handed her one, and all hell broke loose.

I’m not going to detail all the things she called me.  There was a great deal of emotional blackmail, what was I doing in Warwick when she was dying elsewhere, I would have to answer for it, she hoped I could live with my conscience.  There was a lot of shouting about where had my other half hidden her tablets, he had got tablets for her dizziness and now no one could find them.  And there was just a lot of screaming and shouting.  In the end she hung up on me.

The minute I put the phone down I got crippling chest pains.  I took indigestion remedies, which I do have in the house because I do have Barrett’s oesophagus; my own stomach acid is eating my oesophagus away, when it does it, it hurts.  So I stood as upright as I could and loosened my clothing and did eventually get to bed.  The carer had rung me back to apologise, she sounded in shock.  People being horrified at how nasty my mother is to me is becoming quite a feature of her illness.

But this morning I haven’t rung her because I’m waiting for the doctor to ring me back.  I’d like an appointment to get my heart checked out, just in case.  I decided I would do it last night when the other half left me clutching my chest while he popped out to the pub.  I need to look after myself because if I go down, we’re all sunk.

JaneLaverick.com a branch of Stressbusters – When you hear a noise in the neighbourhood, who you gonna call?   The doctor.

This entry was posted in Dementia diaries. and tagged aggression in dementia. Bookmark the permalink.